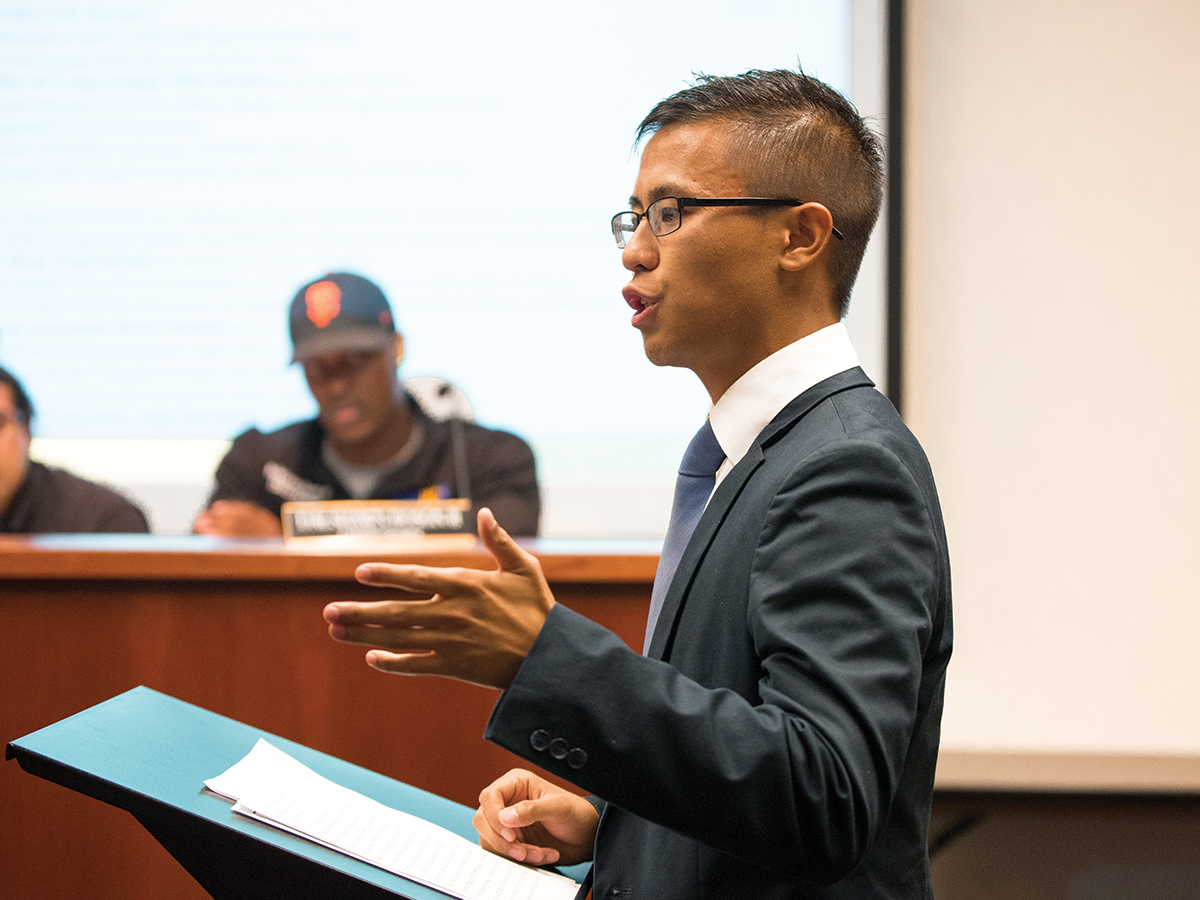 The ASUCR meeting held on Wednesday yielded comments at the public forum segment about edits made last week to a clause in the ASUCR bylaws which handles R’Pantry implementation and the Diversity Council. Acting executive vice president presentations were also given by candidates Wen-Yu Chou, Melina Reyes and Taylor Valmores, with Valmores being appointed on Oct.15.

According to a clause in the previous draft of the bylaws for the Food Security Committee, the committee was to include seven members appointed by the Diversity Council which consists of student representatives from the Ethnic and Gender programs. Their inclusion was to secure the involvement of non-ASUCR members in decisions made related to the R’Pantry. This clause is currently being edited and drafted to the degree that members of the Ethnic and Gender programs came to speak at public forum to express their concerns.

Daniel Lopez, a fourth-year linguistics and anthropology major and one of the leading student organizers for the R’Pantry, spoke to receive clarification regarding the edits made to the bylaws and voiced his grievance of the draft saying, “We feel that if [the clause] is being removed, we are being excluded from that conversation and … we’d like to continue to be [included] as active members of the food pantry.”

Michael Ervin, vice president of internal affairs who has also worked to advocate for R’Pantry, responded to Lopez’ comments stating, “… I had previously assumed that the food pantry was going to be on a much bigger timeline and would probably be coming along online early fall quarter and I want to ensure that the Diversity Council would have all of its members … and I’m still collecting representatives for the Diversity Council as we speak.”

Jessica Urquidez, a political science and ethnic studies double major, followed up to also express concerns with the draft. Urquidez spoke about the readiness of the representatives of the Diversity Council to meet up and discuss the food pantry is perceived as not being matched with equal effort in communication by Ervin saying, “I know that the student regent also sent you an email asking why you haven’t met (with them yet). I just clarified in the bylaws that you are in charge of setting up the meetings no later than week three … but I was just kind of concerned because you were using the excuse of the timeline … when the student representatives that are waiting to get your e-mail … are still not understanding who’s supposed to take charge.”

Ervin later commented that he was waiting on communication from the African Student Programs but will work to further the conversation of the inclusion of the Ethnic and Gender programs in regards to the R’Pantry.

ASUCR president Ashley Harano stated that they are hoping to set up a meeting by next Wednesday or Thursday and allow a discussion amongst the members of the Diversity Council and ASUCR about the goals that these organizations will work towards with respect to the food pantry.

The changes to these bylaws have yet to be posted on the ASUCR website at the time of printing.

Presentations for acting executive vice president were also given in order to fill the seat of current Executive Vice President of ASUCR Armando Saldana, as he is currently studying at the UCDC Academic Internship Program.

Chou, who currently serves as CNAS senator, opened her presentation saying, “I believe the role that we all play is … to help others achieve their success,” She emphasized her work with the office of the executive vice president and the the office of the Mayor. Among other things she hopes to strengthen student recruitment if she was to be elected.

Reyes, who previously served as acting chief justice on the ASUCR Judicial Council, stated that accountability, integrity and transparency are of top priority to her because they are “some of the most crucial aspects to every student government.” Reyes’ presentation centered on how she’d make sure that students and faculty can access resources in order to increase engagement and involvement. She was recently selected to be a UC Office of the President Fellow and plans to work on housing and food security during her tenure.

Valmores, fourth-year public service-political science major, touted his work as a passionate student organizer, naming his positions as president of student senate at his previous community college as one of his accomplishments. He ran for the position of ASUCR executive vice president last year and stated, “I believe strongly that you can’t serve the public without their trust.” He is currently involved in organizing for the Bernie Sanders campaign on campus.

Valmores was ultimately chosen as interim executive vice president, according to an email from President Pro-Tempore Corey Willis on Thursday.

·        The job listings for Food Pantry coordinator and student employees have been posted. A soft rollout date for operations of the R’Pantry is set for November 3.