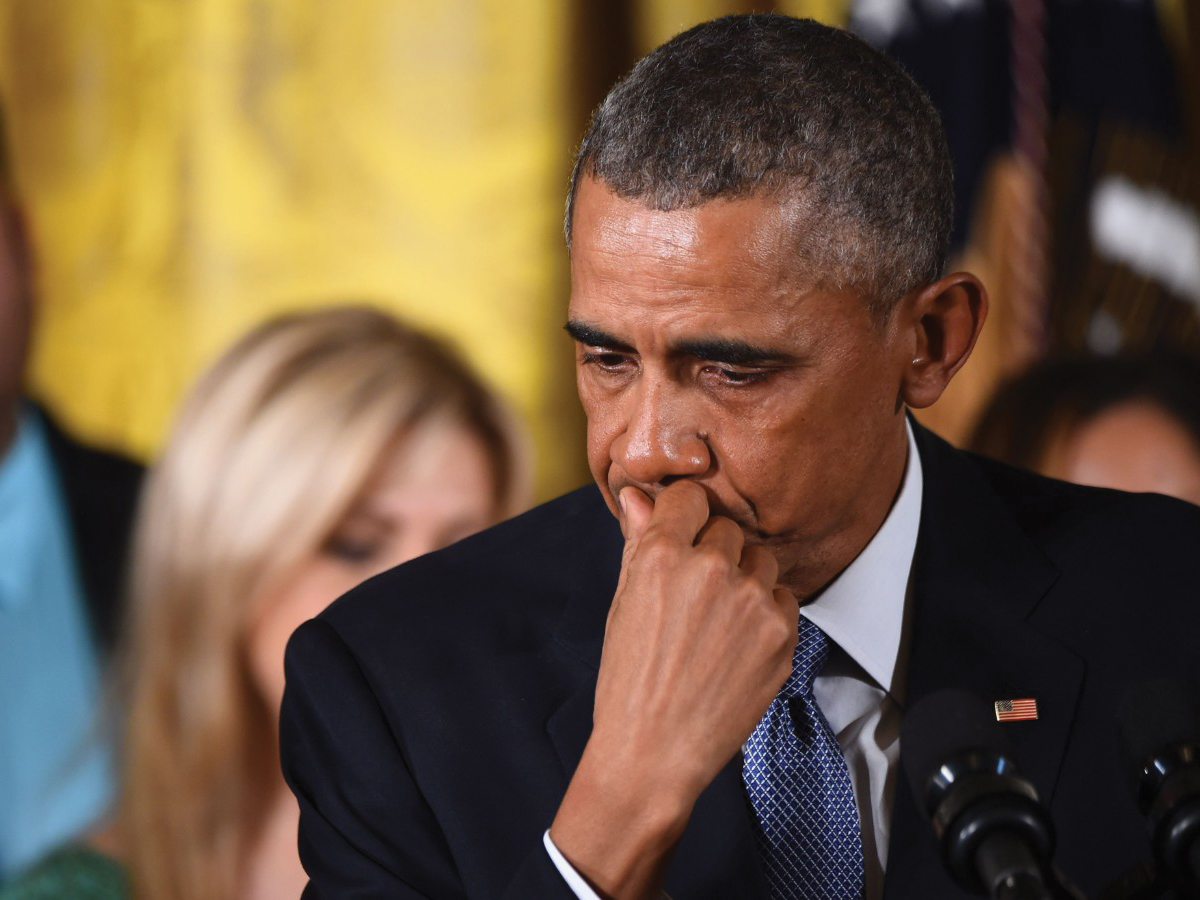 Obama was introduced by Mark Barden, father of Daniel Barden, 7, who died in the Dec. 14, 2012 Sandy Hook Elementary shootings in Newtown, Conn. that left 20 first-graders and 6 educators dead. The president’s speech focused on the countless number of gun-related deaths, roughly 30,000 in the past year alone, and Congress’ inaction to alleviate the situation, saying, “The gun lobby may be holding Congress hostage right now, but they cannot hold America hostage. We do not have to accept this carnage as the price of freedom.”

In his speech Obama referenced measures taken by the Connecticut state legislature in 1995 that aimed to curb gun violence. Gun deaths were reduced by 40 percent since the state passed a law requiring background checks and gun safety courses for gun buyers. He contrasted it with Missouri where gun laws have been loosened and gun deaths have increased to almost 50 percent higher than the national average. Obama also addressed concerns voiced by anti-gun control advocates by saying, “The evidence tells us that in states that require background checks, law-abiding Americans don’t find it any harder to purchase guns whatsoever. Their guns have not been confiscated. Their rights have not been infringed.”

The president’s plan, which can be viewed on the White House website, calls for an overhaul and improvement to the background check system by providing 230 additional examiners and other staff to process the checks, an increase in funding for the Bureau of Alcohol, Tobacco, Firearms and Explosives (ATF) to enforce gun laws, a $500 million investment to increase access to mental health care and increased funding by the Departments of Defense, Justice and Homeland Security to research gun safety technology.

Despite a majority of Americans supporting universal background checks for gun purchases including 81 percent of Republicans and 93 percent of Democrats according to a CBS News poll, Congress and the Senate have consistently blocked measures that would enforce this. In the aftermath of Sandy Hook, a bipartisan amendment was crafted that would have required background checks for private firearm sales but ultimately failed to garner the 60-vote filibuster threshold it needed to pass the then-Democrat majority Senate.

Most recently, the House of Representatives blocked efforts by House Democrats to bring a vote to the floor on a bill that would essentially ban individuals identified as known or suspected terrorists from legally purchasing guns following the December 2015 San Bernardino shootings perpetrated by Islamic State sympathizers that left 14 people dead. A similar proposal was also defeated in the Senate when it didn’t receive enough votes to pass, with only one Democrat voting against the measure.

Over the years, critics such as the non-profit advocacy organization, Coalition to Stop Gun Violence, have pointed toward the political power wielded by the National Rifle Association (NRA) as one explanation for Congress’ idleness on this issue. The NRA has spent an average of $3 million every year in the last five years and $19 million in the 2012 presidential elections to endorse candidates and lobby Congress to influence discourse and legislation that may be brought to the floor.

Following the massacre in Charleston, South Carolina, where a white supremacist killed nine members of the Emanuel African Methodist Episcopal Church on June 17, 2015, Congress rejected an amendment to lift a ban on gun violence research by the Center for Disease Control (CDC). This ban has been in place since the 1990s when Dr. Fred Rivara, a scientist working for the CDC, and his colleges found that “keeping a gun in the home was strongly and independently associated with an increased risk of homicide” by nearly three fold. The NRA accused the CDC of promoting anti-gun propaganda by releasing the findings of their research. Their federal funding was subsequently cut by the amount used for said research.

Critics who decry gun control legislation as a temporary fix say that a focus on changing U.S. culture should be just as emphasized. Derek Barrill, professor of media and cultural studies at UCR, called cultural change in the U.S. an “incredibly complicated issue” and commented on what he sees as factors that contribute to gun violence, saying, “I feel very strongly that gun violence is related to economic issues, particularly poverty, food insecurity and crime … So if we fix the income inequality in this country, I think that gun deaths and injuries would recede.”

“We also need to, as citizens, be more active about politics and improving our communities — there are too many careerist politicians that have been in office for so long, they are only interested in keeping their job, and that means getting in bed with organizations like the NRA and doing their bidding, instead of listening to the needs and desires of their constituents.  A lot of that active attitude can be substantiated in college,” Barrill stated. He urged students to “get active, in addressing gun violence, but also whatever issues that are important to them.”
A town hall was organized by CNN and held on Jan. 7 in Virginia with Obama talking face-to-face with Americans who both supported and held concerns for his plan for executive actions. The NRA declined CNN’s invitation to the town hall, saying, “The National Rifle Association sees no reason to participate in a public relations spectacle orchestrated by the White House.”