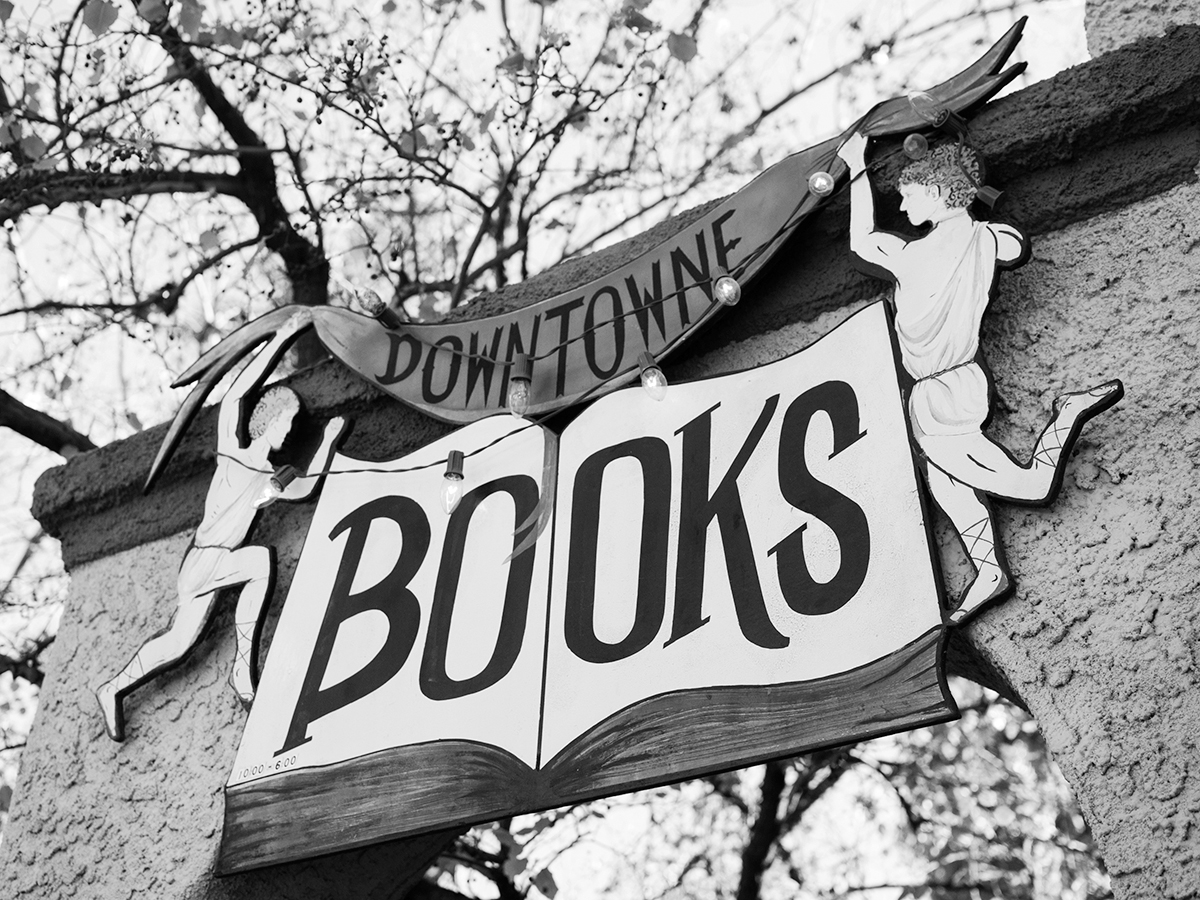 Building culture is a series in the Arts & Entertainment section dedicated to examining different buildings around the area and their important history and roles in our community.

There aren’t that many bookstores in Riverside. This is a shame, since books are the essential building blocks of education. Teach a person how to read and write, and they can practically do anything. In this case, if you lend enough books to Riverside’s Downtowne Bookstore, it may just last forever.

It seems like the bookstore could last forever, too. It’s difficult to track down for a first visit — it’s right off of Sixth Street and Main Street, and toward the end of the long line of historical locations on Main that begins with the Sweeney Art Gallery. And if you do so happen to find it, the entrance itself is hidden in plainsight. A single sign reading “Downtowne Bookstore. Fine used books since 1979” invites passersby down a long, skinny alleyway flanked by the side of the old building and a picket fence. The sense of mystery gives the location a mystical aura, like it belongs on a Harry Potter set. The actual entrance is a door that’s closed, yet it holds a sign inviting people to come in.

The first smell to hit is that of crisp pages, which makes sense — it’s a used bookstore after all. The scent reminded me of visiting the Orange County Christian School’s library when I was little, which was touching, since the bookstore seemed just as homely and classic  Americana. The interior is decorated in an array of spectacular lights and ornaments, like things you’d find decorating somebody’s lawn. Certain floorboards reveal their age with creaks, and the children’s section consists of a corner outfitted with rows of children’s books, a small couch that I could barely fit on and numerous, little old toys that looked like they were donated alongside someone’s books.

The store is co-owned by sisters Nadia and Vera Lee.

“My sister — she does most of the financial-type bookwork,” Nadia Lee said in an interview. “And I do the floorwork, as well as all the selling on Amazon. That’s completely mine, she won’t touch it.”

Although the bookstore was started in 1979, the sisters purchased it in 2002, through a combination of great luck and heartbreaking tragedy. “Since we were in high school, we had dreamed of owning a bookstore,” Nadia explained. “In 2002, I was in a car accident, and my mom died. Later that year, we were getting rid of things we didn’t want. We brought some books here, and the woman who was here at the time, Paula, said, ‘Do you know anyone who’d like to buy a bookstore?’”

“And my sister and I said, ‘Maybe. How much?’ And it was exactly what we had from the accident and Mom’s estate. So I thought, OK, this is a sign. We can’t refuse this.”

For Nadia, running the store grew into a labor of love. “My sister was a full-time teacher, and I was living in Tucson at the time. I was traveling 1,000 miles a week to run the store for three days.” Their success story is the epitome of a full, pull-yourself-by-your-bootstraps American experience. “We had no idea how to run a store. We didn’t know who to hire, how to hire,” Nadia said in a tone that was half exasperated and half playful. “So we just went by word of mouth.”

“And we found out, right from the beginning, that we are never gonna be wealthy,” said Nadia.

From a pessimistic point of view, the fact that the Lees simply accepted their immobility on the socioeconomic ladder was a sign of failure, a symbol of a faux American dream stamping out more livelihoods. But it’s obvious that the Lees are completely living the dream. Unlike the ever-unlucky Willy Loman and his fatal obsession with the American dream, the Lees understand something more important: simply doing what they love, and allowing this love to extend to the community.

“The books out there in the front,” Nadia said, referring to a pile of donated books sitting on a table near the entrance, a sizable pile of one or two dozen books. “We receive about that many almost every day. It’s just so great seeing how many people know about the bookstore and give to it.”

The closest the bookstore came to greatness was when it owned a copy of something from the 1700s. “It was a full set of the works of John Wesley, the Methodist minister,” Nadia said. Leather-bound and beautifully decorated, Nadia was, despite the book’s historical value, determined to sell it on Amazon. However, nobody bought it at $100. “The price kept going down and down — eventually I sold the set for $20.” Irony struck when a modern, paperback version of the same set was brought in for trade — and sold for $100.

The irony of that statement isn’t lost on the bookstore. The aged, brick-and-mortar building that houses the bookstore has certainly seen better years, but it’s lasted well beyond years and decades to continue standing, and I think Downtowne Bookstore will, too. Its value extends far more than just a corner of commerce. It’s symbolic of the simple, homespun grit that holds communities together, and it’s emblematic in Nadia’s last words in the interview.
“You know the expression: ‘learn something knew everyday.’ I do. I love it.”