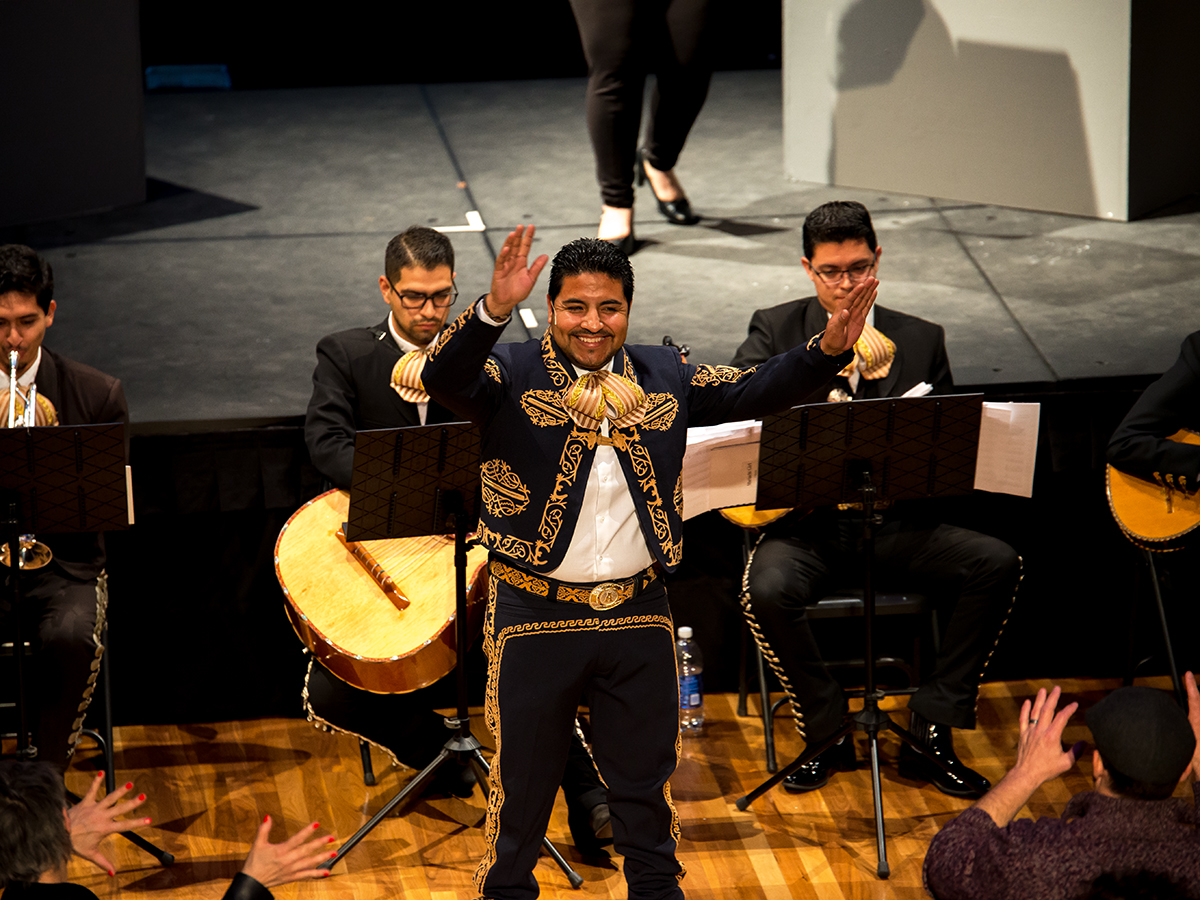 Gazing into the packed atrium of the Culver Center, professor in the Department of Theatre, Film and Digital Production Dr. Tiffany Ana Lopez remarked that she was about to “burst into tears” at the sight of the massive crowd of people who showed up to see “Mariachi Girl,” an all-student production put on by the Latina/o Play Project. Directed by Chancellor’s Research Fellowship scholar Melanie Queponds, and featuring all student actors and musicians making up the in-house mariachi band the odds were good that the play would be a success.

Before the play began, the Culver Center was a hum of energy. Children ran around while parents jockeyed for seats. The staff of the Culver Center, seeing the constant trickle of people heading inside, hurriedly set up additional rows of seats as other attendees headed to the balcony or sat on the steps, craning their necks for a view of the stage. Latin American music played over the PA, including covers of the Imperial March and the Mos Eisley Cantina Song played in mariachi style. A few minutes past eight and after the aforementioned introductions, the play began.

The play had a childlike aesthetic, with painted backgrounds projected behind the stage providing setting, and minimal props being used by the actors. The in-house band provided live music for the actors to sing along to, with band member Adam Siders pulling double duty as musician and character Jose, who works with main character Cita’s mariachi father.

The play concerns 10-year old Cita (Daysy Velasco) and her family, all of whom are Mexican immigrants. Cita’s father Luis (Alfredo Molina) works as a carpenter but also plays mariachi music with his band as a way to try to hold onto the culture of his homeland. Cita idolizes her father and dreams of being a mariachi herself, though she must struggle through her father’s stubbornness and her family’s initial distrust of her dedication. The play is incredibly well acted, as even though some of the actors weren’t stage veterans, they felt like a family unit going through legitimate issues. Even Cita’s father, who plays the antagonist, is incredibly sympathetic, as he wants a better life for his children, hoping they won’t feel as attached to their culture as he is. Cita also struggles against the stigma of there not being a tradition of female mariachis, but fully commits to achieving her dream when she learns about the true story of Lucha Reyes, a female mariachi from the early 1900s.

Though the play was advertised for young audiences, there was plenty to appreciate for people of all ages, as many of the parents in attendance laughed at the jokes playing off the family dynamic. The most comedic character by far was Cita’s brother Danny (Numa Juarez), who had a natural comedic skill with every delivery of his lines. Though he didn’t sing, the rest of the cast showed off their pipes, belting out their lines with power and grace in both English and Spanish. While I was initially worried that I wouldn’t be able to understand the Spanish parts of the play, the context of the lines and the actors’ skills portraying emotion made things easy to understand.

Without trying to spoil much, I have to say that the play ended in a satisfying way that impressed the entire audience, who gave a minutes-long standing ovation. There must have been some sand blowing around during the climactic song, because my eyes started to feel surprisingly watery as the actors performed the final scene.
It feels almost criminal that this is the only planned performance of the show, as it is honestly one of the best theater productions I have ever seen, at UCR or otherwise. We really do have some amazing talent at UCR, and I encourage any interested students to see what the Latina/o Play Project and the rest of the Department of Theater, Film and Digital Production have in store for the future.