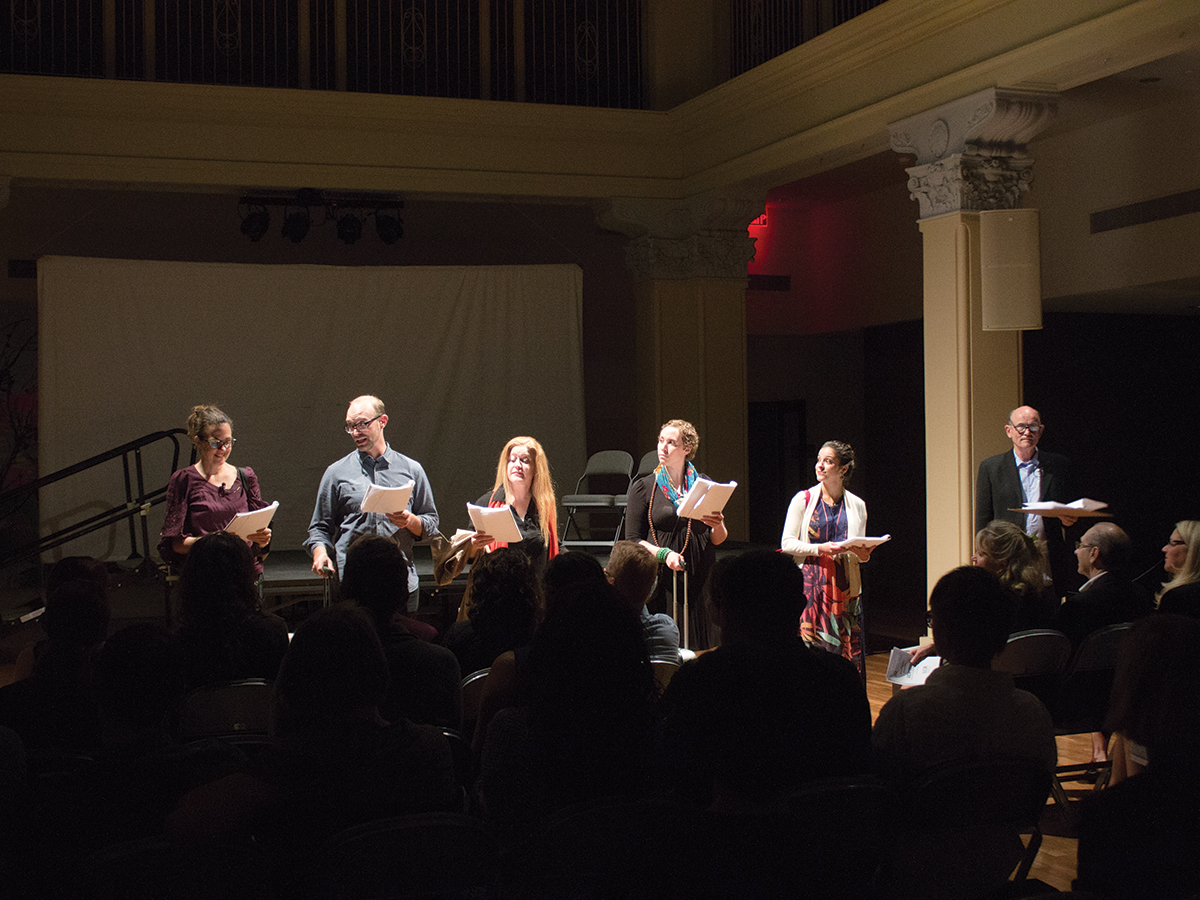 There are very few places that get as dark and empty as downtown Riverside on a Tuesday night at 8 p.m. When I arrived at the Culver Center to watch “Sea Seed,” a staged reading composed by the Sons of Semele Ensemble, a small trickle of visitors to the evening’s play occasionally went from the darkness outside to the white brightness of the Culver Center.

The third reading in a series, this was the final reading of the play — which has been edited after each audience reading to make it more relatable “based on audience feedback, the company fine-tuned and polished the text.” This reading was the culmination of a two-year creative process on behalf of Dr. Erith Jaffe-Berg and the Sons of Semele Ensemble. Jaffe-Berg, who is the head of Theatre, Film and Digital Production at UCR, was inspired by the themes set forth by fellow faculty member Dr. Susan Ossman, in her book “Moving Matters: Paths of Serial Migration.”  All the characters — as well as symbols and ideas from the play — embody what it is like to be a serial migrant (a term coined by Ossman to define a person who “travels between three or more countries, living in different languages and experiencing repeated patterns of movement and migration”).

When the lights faded and the cast stood in a line and started to remark on the strange things people bring to the airport: a change of underwear in the carry-on, an emergency skirt, I started immediately to connect those things with my own experiences of traveling. However I feel as if someone who has little experience with international travel may lack a certain connection with the play. It is majorly concerned with a sort of cosmopolitan migratory experience which most university students see little of.

It was a staged reading of the play, which means that the cast carried their scripts around and had a strange lack of props, which was only obvious to me at two points: when the cast members used a Kleenex box to symbolize a piece of art, and when they were allegedly proposing a toast with invisible glasses. Most of the time, the use of folding plastic chairs was not much of a distraction, as sooner or later I found myself more immersed in what the characters were saying and doing than the esoteric props.

The majority of the hour-and-45-minute play dealt with the dynamic of a family diverse in its traveling experiences. There was a humorous bickering married couple, Colette and Fred (Jaffe-Berg and Matt McCray), who experience emotional and relational turmoil resultant of their wanting to or lack of wanting to travel. A Ugandan-born South African AIDS relief worker, Maddie (Hilletje Bashew), who is about to be married, a sister, Nina (Melina Bielefelt), who makes social experiments into parlor games, a elderly stepfather, Ed (Don Boughton), who disperses well thought-out, profound wisdom about following your heart by seeing the world and the Brazilian sister-in-law, Esperanza (Paula Rebelo), who provides insightful commentary about what it’s like to find yourself at home in a country you were not born in. The majority of the play revolves around the wedding of Maddie to a sister of the family, Anne. I enjoyed the fact that it presented a same-sex relationship without making it a big deal and I was happy that the play had a bittersweet ending that seemed realistic.

The emotions of the play were wide-ranging — exploring different aspects of travel and living in a new place through each of the characters. Even Fred, born and raised in Buffalo, New York has to deal with a long-distance and somewhat ambitiously traveling wife, and their imitation of what it is like to Skype across timezones and international borders carried insight into what it’s like to be in a relationship and  to travel for lengthy periods of time. Many of the interactions in the play were as such, exploring not only what it is like to migrate or travel, but also what it is like to be a sister, wife, husband or father. I was worried that the cast of characters; a family of wealthy socialites, travel being facilitated by a wealthy, art-collecting matriarch, would leave me without a entry into the world of the play. However, the family dynamics that were shown made the characters believable and the story immersive. The play did a marvelous job of examining the wanderlust exemplified by people who wish to travel, see the world and have unique experiences.
There is hope that this staged reading will be produced as a full production in the future.