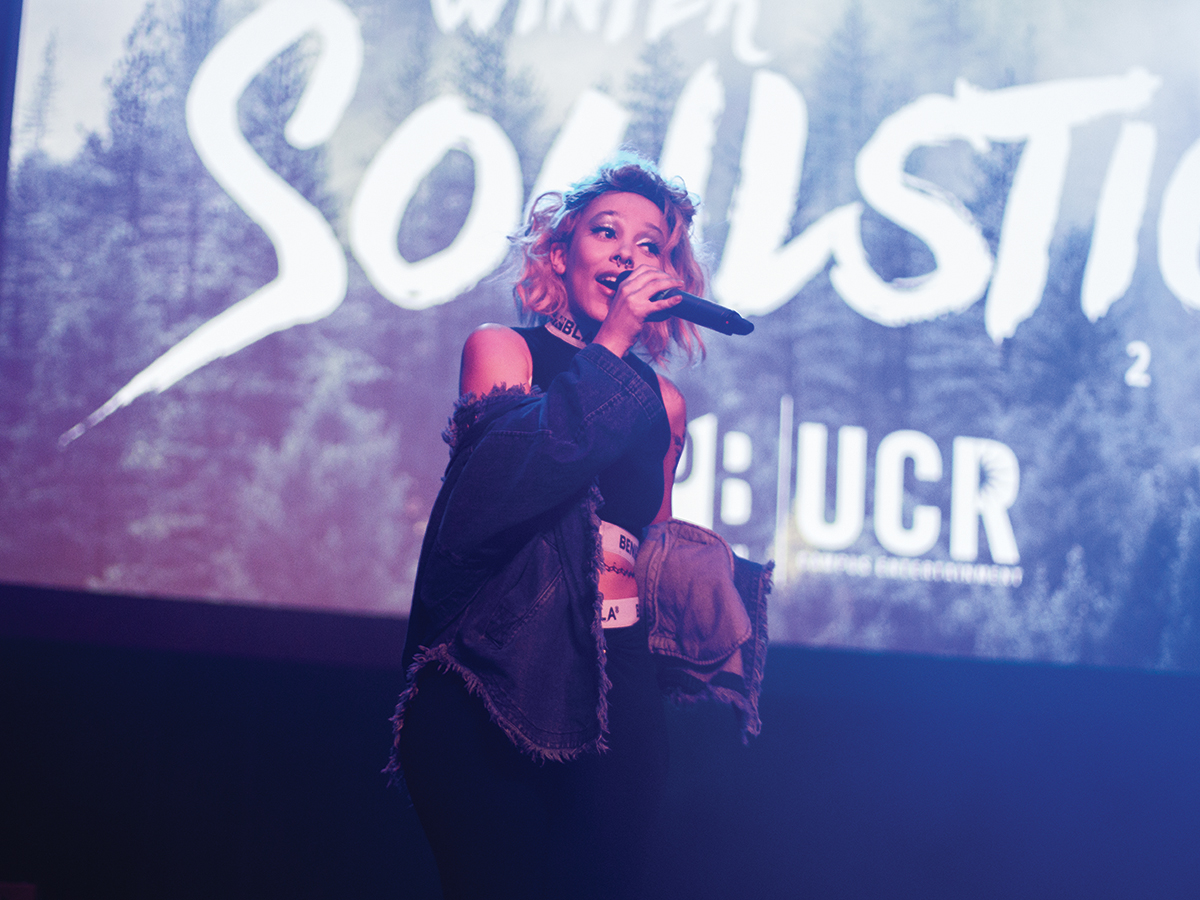 An audience of approximately 400 people filled half of the Riverside Municipal Auditorium with mosh pits, shouts and sexual movements that vaguely resembled dancing, for the Associated Student Program Board’s (ASPB) Winter SOULstice. Featuring performances from Doja Cat, Kelela and The-Dream, the Feb. 18 concert brought together the wildest crowd to the most “turnt” R-and-B performance in ASPB history.

The Riverside Municipal Auditorium was a change of venue for the performance —  typically held at the HUB — which drew a bigger crowd for the winter concert than last year’s, yet failed to fill the venue to its capacity. This hardly mattered for the audience, as the change of space brought a more concert-like atmosphere than the HUB, which kept them energetic for each set.

While each artist delivered strong performances, the deejays brought the crowd to life through songs such as Post-Malone’s “White Iverson” which had a majority of the men in the audience singing along and developing a mosh pit in the middle of the crowd. By the time Kendrick Lamar’s “Alright” came on about four mosh pits developed across the crowd, displaying the audience’s desire to party.

Doja Cat’s performance amplified the crowd as the opening performer. Donning a black midriff tank top, grey sweater, black leggings and white sneakers, Doja Cat showed off a variety of talent for her performance by rapping, singing and dancing.

The LA-based performer released an EP entitled “Purrrr!” in 2014 featuring the popular hit “So High” whose eclectic music video has received over four million views on YouTube. Known for its mixture (or appropriation) of Hindu culture and the artist’s love for marijuana the music video remains the artist’s most iconic work.

Doja Cat began slowly by performing a few of her lesser-known songs including “Candy Salad,” an amped hip-hop track, to begin warming up the crowd. As she danced and hopped across the entire stage, the crowd began shouting “I love you Doja!” as they remained energized with her.

Once Doja Cat got into her hit “So High,” the crowd was already warmed up, singing along with the lyrics. This experience was exhilarating as everyone moved closer to the stage to catch a glimpse of her, as they raised their hands and lighters.

During one of her rap sets, Doja Cat displayed promise until she stumbled on a rap and took a pause. The audience forgave her however, allowing her to continue the energy as she went into “YEEAH!” an electronic-influenced hip-hop song to close out her set.

She also took time to freestyle some lyrics for the audience. Her unique ability as a rapper brought diversity to the concert and assisted her singing throughout the set. Her performance stuck out mostly due to the uniqueness of her set-list and the energy she carried which mimicked the crowd’s.

Next up was R-and-B singer Kelela. Immediately upon hitting the stage, it was clear that the she meant business. The Ethiopian-American artist opened with a short a capella piece that showed off her wide vocal range and consequently captured the attention of the growing crowd. Garnering hoots and hollers from the audience, she moved on to perform her track, “All the Way Down.” Kelela effortlessly moved through her set and although I’m sure everyone would have been happy to listen to her sing and only sing for the rest of the night, she made sure to speak and interact with the crowd as well. “I don’t know about you guys, but one day I could be high and the next day is shit. Holler if you hear me,” she exclaimed to an excited roar from the room.

Kelela continued by giving a shout-out to Doja Cat and expressing her gratitude for being able to perform at such an event. “Three years ago,” she explained, “I was telemarketing. This is a dream come true.” Kelela encouraged all of the college students in the room who feel trapped in a lifestyle they may not want due to pressure from their parents or others in their life. “I was in college for a long time, but I never finished,” she said. “Shout out to anyone doing this right now because they feel like they just have to. She also recognized second-generation students. “I know how that is so double fist pound. My parents were from Ethiopia.”

The 32-year-old got back into the groove of things with songs from her 2013 album, “Cut 4 Me.” The atmosphere remained excited but clearly relaxed, as chatter from pockets of friends near the back of the room was noticeably audible during some portions of her set. However, Kelela snatched some of the attention back by performing her hit and last song of the night, “Rewind.” The crowd bounced and danced to the upbeat dance track before cheering as Kelela expressed her thanks and left the stage.

The last act of the night came in the form of producer and R-and-B singer The-Dream. Random letters shifted and reassembled on a brightly lit screen onstage, forming words like “black” and “dream” in crossword-puzzle fashion. The crowd grew slightly and people who were standing near the back of the room moved closer to get a better look. We watched the The-Dream’s silhouette while he stood in front of the screen, illuminated only by its light. However, the dramatic introduction was a bit too much for some. “He thinks he’s god,” a concert-goer commented while watching the screen. After the letters came to a halt, screams were heard from the audience as it was becoming increasingly clear that his set was about to truly begin.

Donned in a top hat, cheetah shirt, black jeans and shades, he jumped right into his set. The 38-year-old performed new songs as well as some of his older tracks. It was truly a throwback Thursday as The-Dream performed his 2007 hit, “Shawty Is a 10.” Slow recognition crossed the face of many as the audience had an, “Oh it was that guy who sang this song!” moment. While The-Dream sang, videos continued to play on the onstage screen, the projections often correlating with the subject matter discussed in his songs. “Girl I’m here to bury you,” The-Dream ominously sang as a woman’s body lay lifeless in the passenger seat of a car on the screen.

He continued with songs like “Fast Car” and “Walkin’ on the Moon” that undeniably transported most of the college student-filled atmosphere back to their middle school days. The-Dream removed his shades and jacket before incorporating a few slow jams into his set. The crowd grew a bit stagnant but people continued to nod their heads as the music filled the room.
The Dream’s soft and controlled vocals echoed throughout the auditorium as his set soon began to come to a close. The audience received a unique and diverse lineup that put on an electric performance and consequently, Winter SOULstice 2016 was a successful and undeniably soulful event.