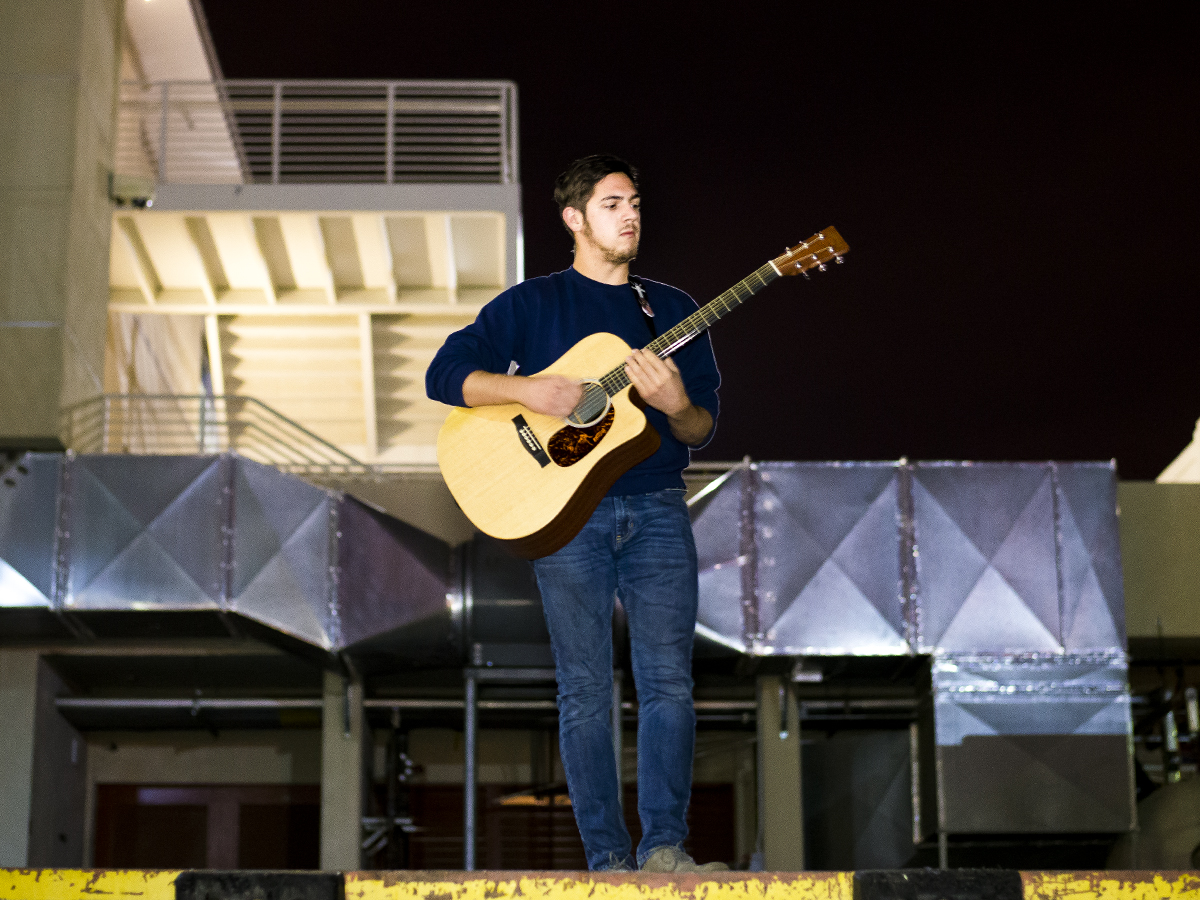 Thechrishaverland is a fifth-dimensional being from the mind of H.P. Lovecraft. Thechrishaverland, stylized all in lowercase, tells “violent stories” with his words as his guitar howls with the rumble of a speeding freight train. He doesn’t do bars, avoiding the crowds of cacophonous drunks and seeks out the weird that haunts the underground and has bred the likes of comedian Andy Kaufman. He has cleared out an entire room with his acerbic wit and seemingly abrasive personality and has also held the rapt attention of a whole audience, every person stock-still and at attention.

When not on stage, Chris Haverland is a resident of the San Timoteo Canyon area of Redlands. Haverland attends the Art Institute, pursuing a degree in acoustics and playing his way across open mics in coffee shops all across the Inland Empire. It was at the Monday open mic at Back to the Grind that I first heard Haverland play, and his style and skill makes him ideal for RADAR Sessions.

His usual kit is a Martin DCPA5 Acoustic-Electric or a ’69 Fender Telecaster with a custom, thinner neck. Haverland explained that this makes it easier to play faster, and seeing him perform, with his unique style of major chords intercut with complex fingering, makes it obvious he needs something that can cater to his intricate playing style. It’s hard to accurately dilute his influences, with the happy-sounding melodies of his guitar contrasting sharply with the visceral melancholy of his lyrics. His best guess is that Elliot Smith has influenced his writing process, and I have to agree. There is, however, a bit of a Southern twang in his vocals and playing that I have a hard time putting my finger on.

Haverland did have something to say about country and country stars in general in our two-hour talk we had after the video shoot. “(It’s) fake country, the person singing about a ‘small town’ with a fake country accent lives in Hollywood and is from California.” While this can be seen as a mere distaste for country becoming more and more associated with popular culture and moving away from its backwater roots, this gives some insight as to where Haverland is trying to go with his music. His stage persona is still very much a concentration of himself, and becoming something fake, is in his words, morally wrong.

Knowing this, Haverland is having a hard time taking the inevitable hits that come with trying to put oneself in the spotlight. There’s marketing, press junkets, criticism and playing show after show to try to make demand for your music, and for Haverland it’s hard to take that step to market his art. There is a freedom to be auteur and “weird” in the underground and taking those steps outside into the light can hurt your eyes and blur your vision.

And Haverland is a child of the underground. He plays basement shows with weird lighting and has lyrics that people can find distasteful and disturbing. He likes art, however, for its freedom to let you say “whatever you want.” His first LP is vividly experimental, almost dichotomous to his usual playing style, but in his words, he “had to make it.” Haverland sees underground music as something larger than himself, a necessary foundation for the rest of musical culture, and its freedom is what molded him, and sometimes leaving home is the hardest thing we ever do.

Haverland does have an ideal future for his music, however. He wants to create a hybrid of musical theater, with his songs accompanying actors and vignettes, creating a larger and more vivid story than he can create with his songs alone.
For now, Haverland is still playing music around the Inland Empire, and is a staple at Back to the Grind’s Monday open mic. I’d say going to see him in person is your best bet, and I strongly encourage you to do so if this article or our accompanying video of his performance piques your interest. His music is also available for download at thechrishaverland.bandcamp.com.