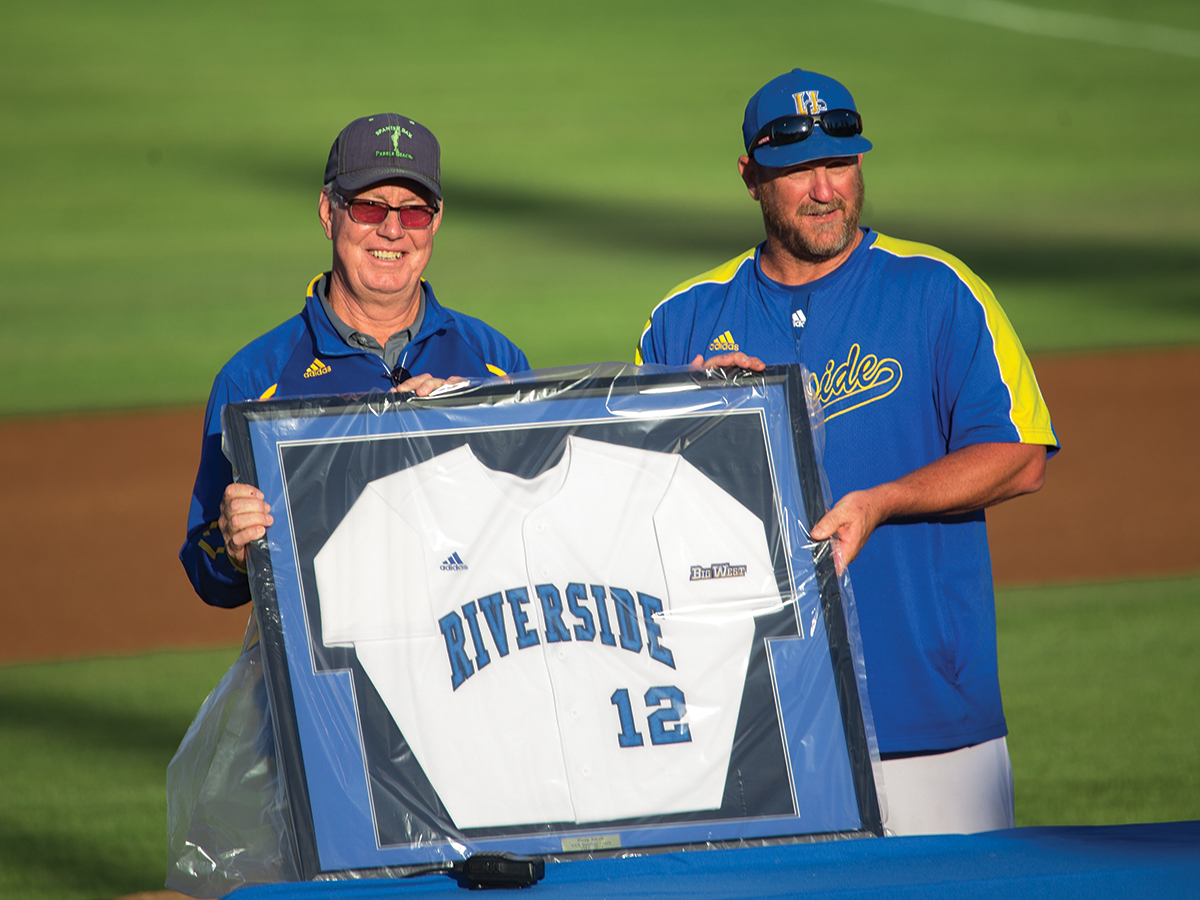 If simply hearing the roar of cheers that encapsulated the Plex on Friday evening, one would not know if it were former UCR baseball head coach, Doug Smith, or John the Apostle who had just walked onto the field to have their jersey retired. Though, perhaps, for the most dedicated of UCR fans, the difference between the two isn’t so distinct. Sure, one wrote the revered book of Revelation, but the other was a part of the program as both a player and a coach for 35 years.

As a catcher, Smith stood out, earning first team all-conference in his senior season for the Highlanders. Though it was his coaching where his biggest impact was made on the program. In his 10 seasons as head coach, Smith led UCR to their first and only Big West Conference title and Division I NCAA Tournament appearance in 2007. Smith also oversaw 34 All-Americans and over 150 players who’ve made their way to the professional level — including his coaching successor, Troy Percival.

The coach who retired at the end of the 2014 season now spends his time roaming the country, is a regular at the golf course and, as of Friday, his iconic number 12 jersey will forever be a mainstay among UCR’s Wall of Fame. The ceremony was short, as Smith preferred, but as his divine, legendary presence graced the field once more, the enthusiasm throughout the field was beyond palpable.

We sat down with Smith just 24 hours prior to this ceremony to catch up on his life post-UCR, involvement with the program and how, after 35 years of being competitively involved in the sport, he views baseball much differently — among other things. The interview has been lightly edited for clarity.

Coming in as a player in 1976, was having your jersey/number retired a goal you had envisioned?

Oh no. You know, when I was a player you’re just hoping to make a positive impact where you get a chance to be a good player in college and I was fortunate that occurred. Then when I started working there (as a coach ), you know, you just hope you do well enough when you’re young to keep your job and keep moving forward and that also occurred. But when it did shake out as it did, obviously you know you can’t look for something like that, but I am very, very thankful that it is.

Well, to a smaller scale, was coaching something you had in mind early in your playing career?

Oh yes it was. I had planned to coach, it was something I had wanted to do and I had really good role models as coaches and people that I had played for, so that’s something I kinda wanted to do as soon as I finished playing and was very fortunate that Jack Smitheran (UCR baseball head coach from 1974 – 2004) gave me an opportunity to be an assistant and it worked out pretty well.

Speaking of role models, do you have a similar relationship with the current team where you serve in a mentorship role at all?

You know, I talk to Troy on a pretty regular basis and obviously Troy played at our place so I’ve known him for a long time. He’s a friend. So I talk to him pretty regularly, you know he played in the big leagues for 15 or 16 years so he doesn’t need much advice but college baseball is different than pro baseball. So we do talk about the differences with it and I enjoy spending time with him.

What are those differences?

You know, the biggest difference is the number of games. In college, the number is only 56 games and every game is really, really critical whereas in the big leagues you play 162 games and some of them are just going to get away from you. And just the management of having guys in class, where in pro ball, it’s nothing but go play. It’s just a little difference at the college level, you’ve got to manage schedules and the whole thing.

So you would say you’re pretty involved with the coaches and players in this current regime?

I would, I would. I talk to Troy a couple times a week typically and I’ve had an opportunity to see them play I think five or six times this year at home and some of the guys on the team are still there from when I coached so yeah, I enjoy a close relationship with them.

What do you think of the direction of the team this year?

You know I think they’re good. Had a good win against the University of Arizona on Tuesday, lost a couple on Wednesday but they’ve got UC Davis in town this weekend and I would suspect at home (they’ll) get (a series win over) UC Davis. I think they’ve got a good club, they’re 10-13 right now but I don’t think that’s indicative of who they are. I think they’re pretty talented and they’ve got a chance to really play well in my opinion.

My time to move on was then and I’m not looking back. I had a great run at UCR, I thoroughly enjoyed it and now I get to be a fan.

Yeah, by the looks of it, coach set them up with a tougher schedule early to get them battle-tested.

Yeah, they had a good schedule. They had Kansas State early and University of Washington in early and those are tough series and they were able to split both. So I think they’re on the right track and obviously Troy knows what he’s doing so I think they’ll be just fine.

What qualities do you think Troy has managed to carry over from your regime?

Switching on you, you’ve been retired for about a year and a half now. How are you spending your time?

You know, I love it. I’m playing golf three or four times a week, my wife and I are traveling, going to New York City next week and so I’m thoroughly enjoying it. You know I miss part of the coaching, I miss the games, the competition, miss the day-to-day interaction with the players and other coaches. But my time to move on was then and I’m not looking back. I had a great run at UCR, I thoroughly enjoyed it and now I get to be a fan.

What is the experience of simply watching the game now after 36 years of being a coach or player?

I enjoy the game more now. You know, when you’ve coached all those years, I don’t want to say it becomes a chore but you’re constantly trying to figure out how to win each ball game. So you’re working it and sometimes when you do that, you lose a little bit of your enjoyment for the game. Now I’ve grown back where I love seeing the game again and really I’ll be honest with you I enjoy it a little bit more.

Yeah, I could see that. Probably a bit more appreciation too in that regard.

Yeah, very much so. You know we’ve got a couple guys in the major leagues this year and so I get to go watch them play and those type of things are always fun to do.