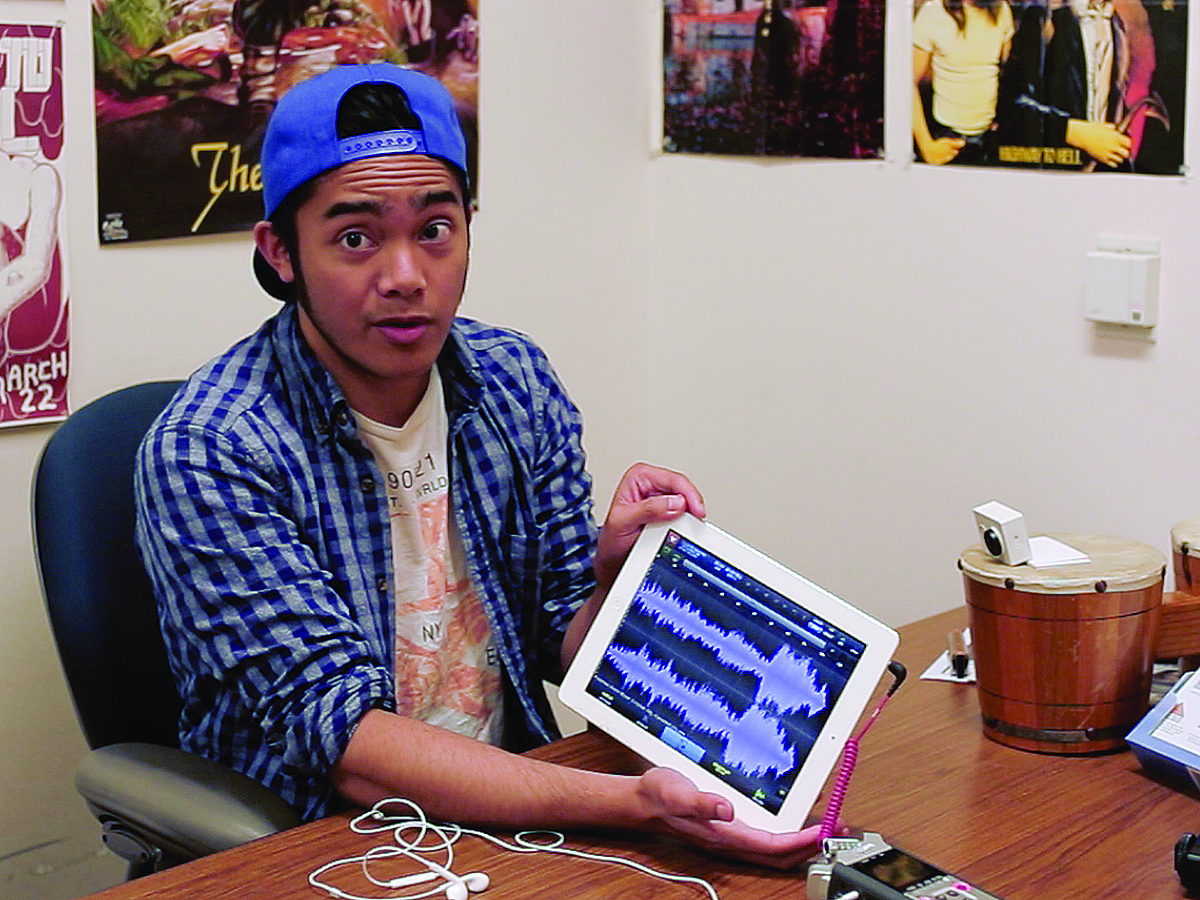 This week’s RADAR Sessions moved away from the more traditional notion of  a university musician as someone with a guitar and a great voice. In exploring the talent at Riverside we have come to find musicians who work within all genres. For this week’s Sessions we had Clayton Pangelinan in the office. Also known as Illin Mic, Pangelinan has been pushing some nasty beats for around four years now.

As he told me, it all started when he picked up three CDs and rapped along with them. He has spent the last four years mastering the art of producing, sampling everything from soul music to Mario from Nintendo 64. But Illin Mic is also a rapper: His flow is smooth, meandering along his downtempo boom-bap beats, and combines lyrical energy with his jazz-influenced beats. The only parallels that come to mind are Joey Bada$$ and The Roots.

When he’s producing beats, he goes by the name of The Microphonist. Programming beats with his iPad, The Microphonist brings about a unique soundscape to his beats, that are modeled on modern jazz rap. His most recent beat tape called “No Title” is downtempo and ethereal. We sat down in the office before a little performance.

As we sat down, I initially asked him, “So I know you, but for the audiences who aren’t familiar with your work, what kind of music do you make?”

I followed up by asking, “How long have you been rapping and producing for? And what made you get started as a musician?”

He thought about it for a minute and said, ”I’d say about four years now. You know it’s crazy, because I’ve been asking myself that same question too, and it’s like, just thinking it over from where I first began and where I started. From an early age I was always really into music. The first few albums I had were “Late Registration” by Kanye West, “The Definition” by LL Cool J and I had Black Eyed Peas back when they were hot, the album was called “Monkey Business.” It was those three CDs I started with, just copying their verses and trying to rap along with those CDs. I’d just practice that, and from there I got introduced to song structure and melody and stuff before I even knew what those things were.”

His range as a musician was surprising. Most DJs and producers I have met usually carve out a sound and stick within that soundscape. Curious about his musical range, I asked him about his “sound” or his style. Illin Mic claimed, “Honestly, it’s kind of hard for me to pinpoint because I have so many influences and I take so many different things from so many different beat makers. Especially from like Madlib and J Dilla, who are huge influences on me. So I mean, I think for right now a lot of my stuff is really boom-bap heavy, really heavy on the drums, a lot of cymbals, a lot of crashes, a lot of high-hats, and the kicks are really deep and boomy. I also try to model my snares off of Dilla, and have the high-hats with a lot of snap.”

Furthermore, I asked Illin Mic about his recent activities, and whether he has any new music on the way. He spoke about his upcoming project, called “The Mind State EP” on which he is both rapping and producing. Apart from beat tapes he has released, this will be his first official release. He also spoke about his most recent drop, which was a beat tape called “No Title” which is kind of inspired by Kendrick Lamar’s “Untitled. Unmastered.” This project, which he released last week is filled with short down tempo snippets that exude a jazzy atmosphere. His music is available for download on bandcamp: http://themicrophonist.bandcamp.com/