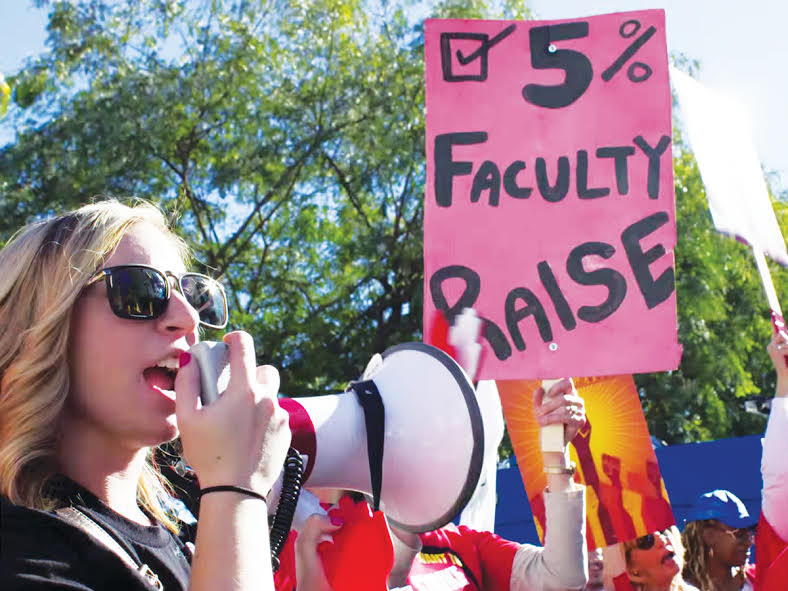 The California State Faculty Association (CFA) and California State University (CSU) administrators have reached an agreement in a yearlong battle over faculty raises. Over the next three years CSU faculty will receive a total increase of 10.5 percent, with faculty receiving a 5 percent increase on June 30 of this year. On July 1, a 2 percent increase will take effect, while the remaining 3.5 percent will be implemented the following year.

In October all faculty members voted to authorize a strike if their demands for a raise were not met, with a majority of faculty members voting in favor of a strike. These strikes were slated to take place April 13-15 and April 18-19 at all 23 CSU campuses, the first CSU faculty strike since 2011.

A fact-finding report was released on Monday, March 25, 2016 and recommended CSU administrators give the 5 percent raise to all faculty by reallocating the money they are spending in other areas such as administrative costs.

“The recommendation to redirect funds is a confirmation that the CSU does not have unallocated resources to meet the CFA’s salary demands,” said CSU spokeswoman Laurie Weidner in an email addressing the fact-finding report.

Despite threats of a strike earlier in the year, the CSU system released a statement reassuring students the strike will not impact their ability to finish the semester and graduate on time. “If a strike occurs, campuses intend to remain open … The California State University remains committed to reaching a resolution,” the statement said.

According to the CSU system, the annual salary for a full-time tenured professor averages $96,660 but more than half of CSU faculty members earn less than $38,000 annually according to the faculty association.

“Faculty, on average, have lost $9,000 in purchasing power over the last decade. It is time to stand and say, no longer,” said Kevin Wehr, the chairman of the union bargaining team.