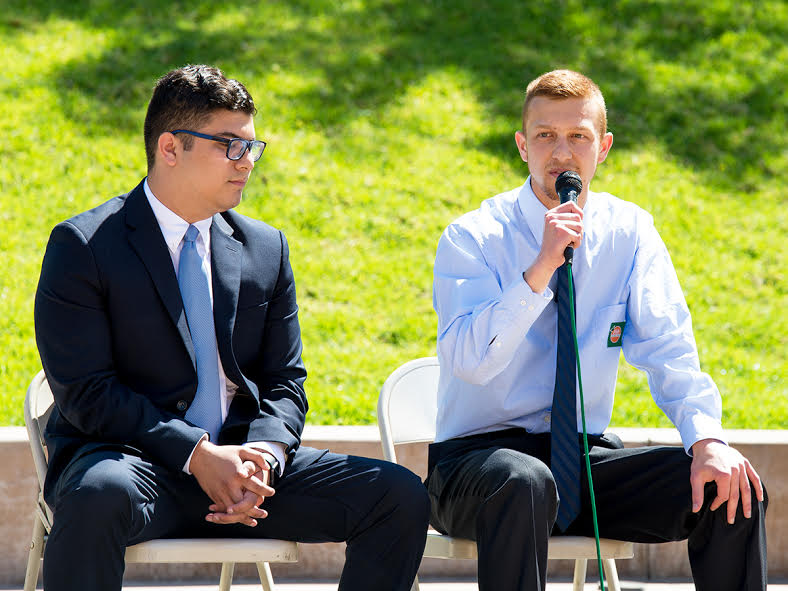 Second-year biochemistry major Wen-Yu Chou from [YOUR]Side is the only candidate for the executive vice president position. Chou plans on assisting the senate and making sure that they are held accountable, in order to help ASUCR run efficiently during their meetings. This includes limiting the number of closed ballot votes and ensuring that senators are on top of their academics and projects.

“As executive vice president you are not the senate’s boss,” Chou stated. “In fact you are the senate’s mentor. You are their guide. And definitely I serve them for them to serve you all.”

Loera discussed student demonstrations and his goals to put pressure on the Riverside community to help overturn the city’s housing ordinances, which restrict more than four people who are not relatives from living in the same housing space and restrict the number of rooms homeowners are allowed to rent out. To do this, Loera wants to build relationships with the city council to assist these changes, but emphasized the importance of aggressive student activism to combat these ordinances.

“For the past two years I’ve worked with the city. I’ve maintained great relationships with the city. But what I’ve found is that the city doesn’t care about you,” Loera explained. “The residents in the city don’t care about you. They continue to push these draconian pieces of legislation that restrict housing … That give you these $1,200 fines just for noise complaints. So instead of continuing this history of pandering to city council, I think we need to start being aggressive.”

Azedi focused on reforming the budget to allow more students to attend conferences across the state, such as the UC Student Association student congress and Washington D.C. conferences. By doing this, Azedi hopes to bring awareness of these issues to the UC Board of Regents, chancellors and congressmen so that they can meet student demands.

“In my opinion this is one of the most important offices,” Azedi elaborated. “It is the direct line from 19,000 students to people like the governor, people like the regents, to Napolitano. We need to put as much money as possible to publicizing this office and making sure that people know this exists.”

The candidates discussed what they believed were the biggest issues students faced on campus. Saleheen stated that student access to resources such as textbooks are a large issue on campus.

“Textbooks are way too expensive. It’s unnecessary for students to be prioritizing textbooks over the mental and physical well-being. I feel that accessibility to resources like the food pantry has really alleviated that … Projects like that really inspire me to create new avenues for student success,” Saleheen elucidated.

“It is not up to me to decide which is the most pertinent or important issue, but to listen in on the student voice and to hear from them what is the most important issue,” Boson explained. As vice president of internal affairs, Boson stated he will help create legislation to combat certain issues students discuss, highlighting problems such as racism on campus and food and housing security.

After their presentations, former vice president of internal affairs Fernando Echeverria asked the candidates about how they would deal with capacity issues, due to UCR’s 2020 expansion plan.

Saleheen stated that while she would work to help students with the campus expansion, it is necessary for her to address the lack of resources on campus such as parking, by working to lower the cost of a parking pass.

“I would like the VPCIA office to make sure we are talking to administration and addressing these concerns,” Saleheen concluded.

Boson discussed current projects that the [YOUR]Side party has implemented to assist students with the campus expansion plan such as citation-free parking during finals week and the bike share program, which will launch in fall.

“As the campus is growing and because there is not enough room to accommodate all the students, there will now be bikes located at central locations on campus … so we’ve already developed solutions for these issues and best believe we will continue to do so,” Boson voiced.