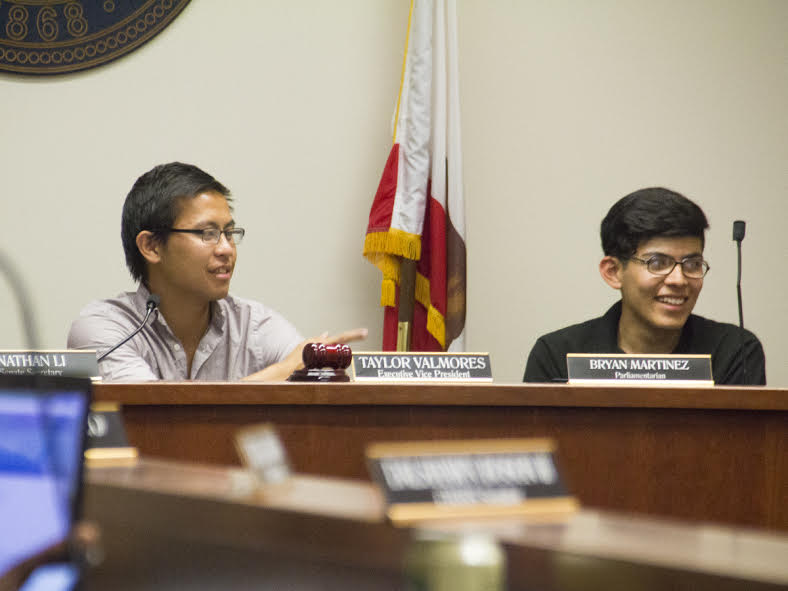 The ASUCR senate convened on Wednesday to discuss and approve two ballot referendums to be added to the 2016 ballot. They included an amendment to the Student Voice Initiative (SVI) referendum and the Highlander Newspaper referendum, both of which passed.

The Student Voice Initiative Referendum was the first to be approved by the senate with no debate on the matter and garnered a vote of 12-0-0. The original SVI referendum was a $1 fee that allocated $0.50 for dues to the University of California Student Association (UCSA) and the other $0.50 toward the ASUCR vice president of external affairs budget “to provide funding for students attending various UCSA conferences statewide.” The amendment, authored by current Vice President of Finance Shafi Karim, seeks to allocate the entire amount of the fee toward UCSA conferences as UCSA currently has its own referendum that allocates $0.75 for dues.

According to Karim, the referendum has been approved by the vice chancellor of student affairs office, Chancellor Kim Wilcox and is currently being reviewed by the University of California Office of the President (UCOP). After it is assumedly approved it will appear on the ballot.

Editor-in-Chief of the Highlander Christal Mims presented the Highlander Newspaper referendum to the senate during the meeting and highlighted her hopes for what the referendum may provide for the student-run newspaper, which included expanding existing departments such as video and marketing and improving staff efficiency, saying, “One of the other things we’d like to focus on is getting more training with senior staff … We don’t have a journalism program here. This is the only outlet for students (who want to pursue journalism) … We don’t have the support of a lot of advisors and … sending our editorial board to more training and conferences could be helpful.”

Because of recent decline in ad revenues, the Highlander Newspaper referendum with its proposed student fee increase from $2 to $4 also hopes to receive a “more stable source of income and therefore rely less on advertisements,” as well as “better serve the campus by meeting the demands of contemporary readers” which includes “an increased presence on campus, the Internet, social media,” and “mobile technology,” among other things.

President Pro Tempore Corey Willis, articulated his dissent for the referendum after Mims’ closing remarks, asserting, “I think journalism and newspapers are a very good thing to inform the student body and hold public officials accountable … But I dislike the Highlander a lot and I don’t know if you’ve ever gotten that vibe because it seems to me that a lot of times there have been misinformation that has been intentionally fed due to a lot of people’s personal biases against different people in the offices.”

Willis continued, “There has been a lot of situations where there was misinformation that was delivered and in some of them — our names and our positions are on our plaques — and there have been multiple instances where people’s positions were gotten incorrect. Last year as well it seems as though that there was … intentional publishing of misinformation or sort of yellow journalism tactics to stir up things and present things in such a manner that made certain individuals look bad … I am absolutely in favor of journalism … but for me personally I wouldn’t support this for the simple fact that I don’t think that students aren’t getting effective journalism as it is now.”

Mims responded to Willis’ comments, stating, “Everyone on staff is very invested in whatever goes on on campus. Personally I take my job very seriously and I would never try to intentionally antagonize anyone through an article and I think everyone on our staff knows that … With something like this we can send more people to training. We can get people going to conferences that teach us more about journalism … and we’d be able to do our jobs better.”

CNAS Senator Nevin Perera was among others who chimed in for support of the referendum, expressing, “With an increase in budget, there would be room for improvement. We can’t expect any improvement if we don’t actually give resources.”

Elections Director Melina Reyes shared opinions similar to Willis regarding the Highlander’s reporting; however Reyes clarified, “Ultimately what’s presented before us is not a matter of our opinion. It’s to pass this along to the students to see whether they feel that the Highlander should have more resources to be able to expand themselves to serve them better … Ultimately our emotions and our feelings, like I said I can share many of the negatives ones as well … It’s not our position to make value assessments like that on this referendum.”

President Ashley Harano punctuated the end of the remarks on the matter, stating, “People who are voting, you represent the voices of the population of UCR not just your own personal opinions … Actually putting it on the ballot and giving students a voice for this could really help not only the students who are working tirelessly in the Highlander but also the students who take the time to read it and those who maybe don’t read it but could read it if it’s (expanded) on social media.”

The referendum was later approved to be placed on the ballot with a vote of 11-1-0 with Willis casting the only dissenting vote.