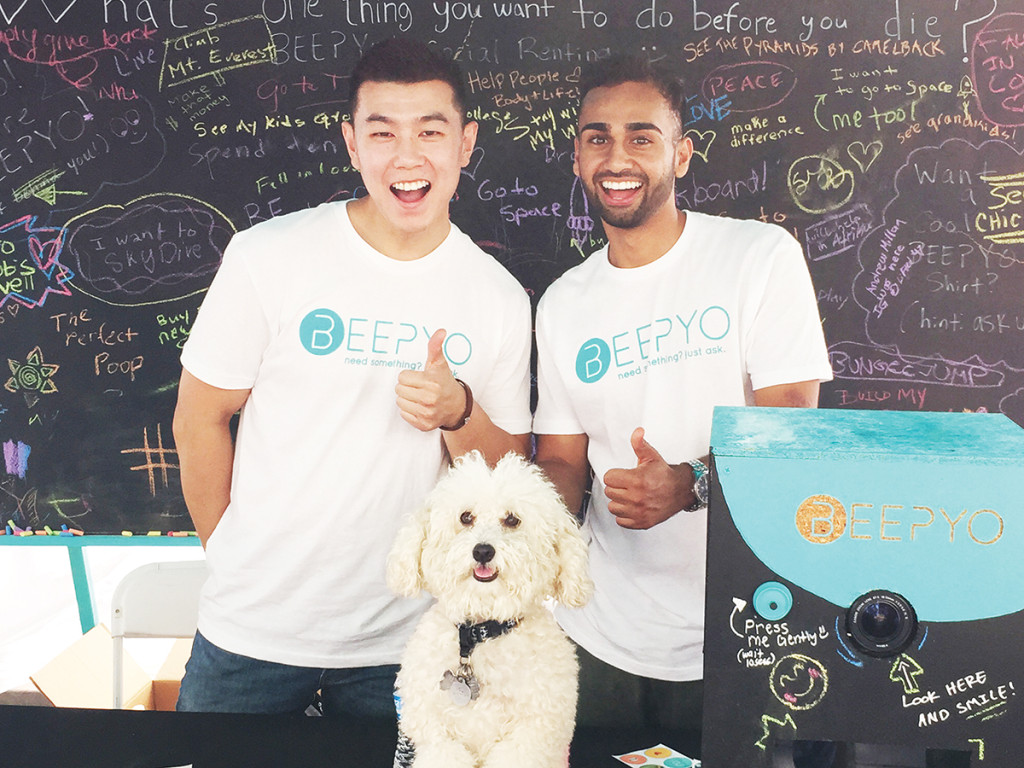 “Here’s a scenario: Let’s say you were camping at Coachella this weekend but you don’t have a tent. But buying a tent for a one-time use can be expensive, so what would you do? You look for one on Beepyo!” remarked Arjun Patel, a 2014 UCR graduate. Beepyo, a start-up app mainly co-founded by UCR alumni Arjun and Bryan Trang, is an online rental marketplace that caters to millennials and particularly college students, to provide them with the resources that they need to have fun and truly live up to the college experience.

The app allows students to request supplies ranging from appliances to recreational equipment and everything in between, so long as there is a willing renter in the local area and both parties agree on a price set by the owner. “This helps us enforce a sense of a community within the area, since we want people to be able to experience everything without the hefty cost of buying,” elaborated Bryan.

After just their first day of launching at UCR, the app has already received roughly 70 members, proving to be a great start to their goal of obtaining 3,000 members in a year. However, the process leading up to the launch was not as simple as they had originally perceived it to be.

In 2014, freshly graduated alumni Arjun and Bryan had similar goals in life: Get a well-paying job, and be set from there. Arjun, previously majoring in business and informational technology, went into the field of management consulting while Bryan, previously majoring in business economics, landed a job as a product analyst. Despite the seemingly stable jobs, Arjun and Bryan were miserable and hated their work, feeling as if they were forced into it instead.

After a year of the dreaded nine-to-five lifestyle, they finally had their “aha” moment. Remembering his previous college days as a member of Delta Sigma Pi, Arjun realized that every time the club had an event, they always needed to buy a lot of things. “For example, I had this brilliant idea of a hot chocolate fundraiser in the middle of spring so I bought this hot chocolate machine for 60 dollars … our only customer was me, and I kept thinking, ‘Man, I wish I could’ve rented this instead to test it out,’” he added.

Even while on a vacation in Hawaii, they still found themselves wanting to rent objects such as a GoPro to make their trip more memorable. “You know what, let’s take the plunge: Let’s quit our jobs and create something,” stated Arjun, finally speaking out on his and Bryan’s common sentiment.

And it was definitely a risky decision to make. Going from having jobs to starting from scratch was difficult, especially financially, but luckily the two have been well-trained in the area of surviving on a low budget, thanks to college. “We only had enough saved up to survive until December, and we quit our jobs in June so it went by really fast. I took up a lot of freelance projects to survive and as much as I hated my previous job, I was able to incorporate some skills I had learned from them and my experience with Photoshop,” said Bryan. “We also hosted pretty legit meditation classes with green tea and watermelon and dressed up in the whole getup! Surprisingly, we actually had two clients and made 40 dollars, which also helped,” laughed Arjun.

By gathering their team of eight people through previous connections with friends and reaching out, Bryan and Arjun were able to establish a group of skilled and ambitious members to put their ideas to the test. Through many cases of trial and error, the app was finally ready for its launch. Inspired by the quote “be in pursuit of odyssey” from one of their favorite books entitled “The Alchemist” by Paulo Coelho, they named the app Beepyo (B-P-O).
Though the app is still in its early stages of experimenting and receiving feedback from students, the Beepyo team will continue with their efforts, eventually expanding to other UC campuses and colleges. “We want to make (the students’) experiences better and maybe even the entire product. We failed a lot in this past year and launched later than expected, but it’s just a matter of sticking through to your vision and challenging yourself to reach your goal,” advises Bryan. “This is also our way to give back to UCR, for everything it’s done to shape us into who we are today,” concluded Arjun.