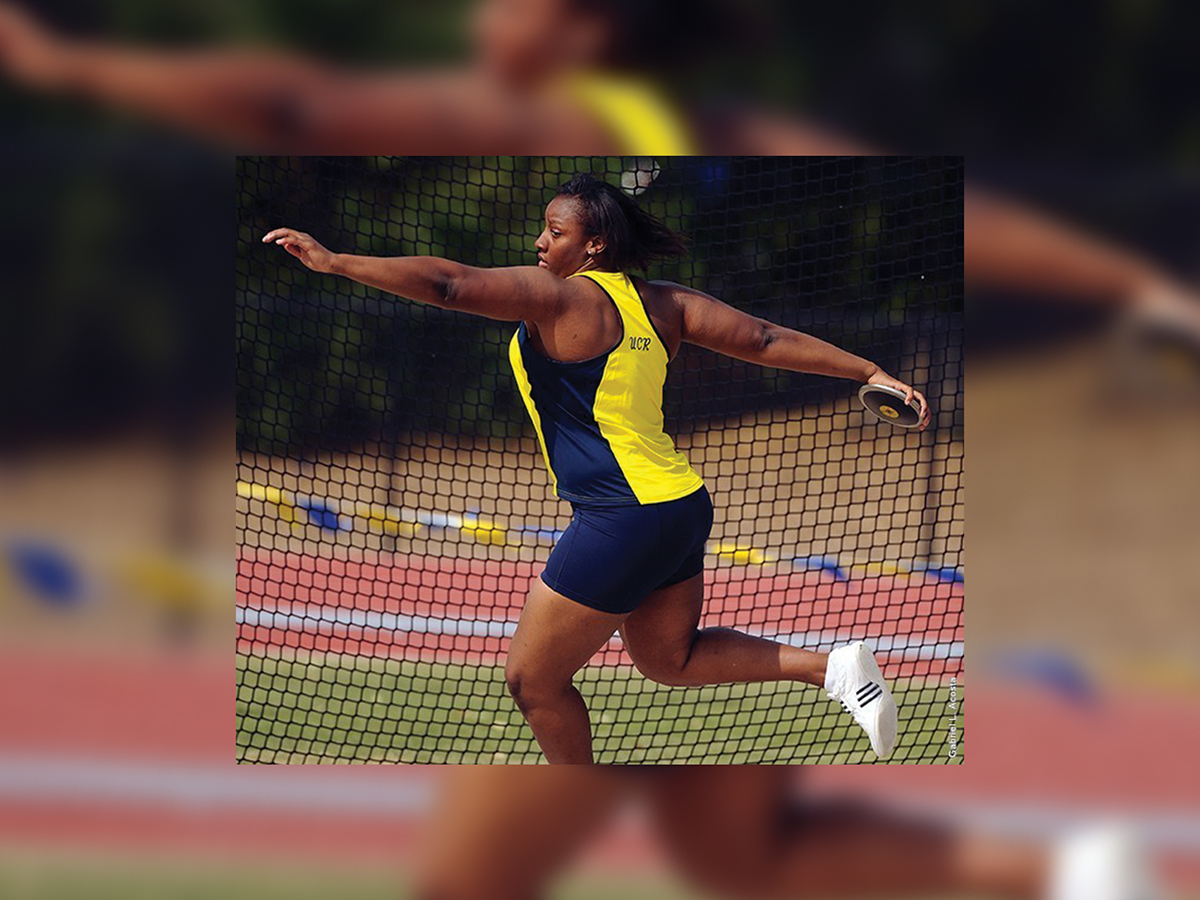 If you were asked to picture someone capable of throwing a nine-pound weight 190 feet through the air, chances are you would think of someone whose physique is a cross between The Rock and LeBron James. Or, maybe you would picture a five-foot-six woman who walks around with a smile and a presence that is more inviting than intimidating. If that is the image that came to your mind, you might have seen her posters or you must already know fifth-year UCR senior hammer thrower Vesta Bell.

Bell loves to win, but she did not always know she wanted to be a national champion hammer thrower — a feat she accomplished on March 11 in Alabama. In fact, while in high school track, she was a sprinter and long jumper who thought throwing was “really boring” and “something for football players to do out of season.” Basically, Bell did not even have throwing on her radar of interests. However, once Bell began her training at Laney College in which she lifted weights three times a week to build muscle mass, her coach immediately noticed and pushed her to try shot put. Bell’s first throwing season was more than a success for any first-time thrower, as she went on to win state championship, and that solidified her fate as a thrower.

Bell earned a scholarship to UCR after her second season at Laney and was recruited exclusively for throwing by then-coach Rica Bush. However, Bell needed to redshirt her first season to practice hammer throw and discus. During her first redshirt season under Bush, Bell struggled as Bush attempted to switch Bell’s throwing technique from a glide to a spin. During Bell’s redshirt season “coach (Rica) would always throw ‘you guys could be national champions’ out there. But I didn’t feel it because shot was going horrendous at the time,” Bell said. However, she overcame her shot put struggles by picking up the hammer throw despite having no idea what it was: “I thought they threw actual hammers around.”

Initially Bell was not planning on specializing in the hammer throw, especially since she was making a transition from a seven-pound shot put to a nine-pound hammer. “I never thought I would be able to throw it far, mostly because it was heavy and my size. I would go to meets and think, ‘wow these girls are big.’” This only made Bell want to go back to jumping even more. Nevertheless Bell kept lifting weights and kept practicing the throwing events as she wanted to believe her coach every time she told the team “you guys can be national champions.” Unfortunately after Bell’s first year at UCR, Bush stepped down from coaching for personal reasons.

I never thought I would be able to throw it far, mostly because it was heavy and my size. I would go to meets and think, ‘wow these girls are big.'”

Bell saw improvement right away and she wanted to get even better as she found herself finally enjoying throwing. Bell and Pagel “set goals (together) every week. And they were realistic goals,” says Bell, which helped fuel her development. However Bell’s success did not come solely from physical training —  she worked hard mentally as well. Bell believes “throwing is 50 percent physical and 50 percent mental” and she began working with Dio Saucedo, the athletic counselor at UCR who deals specifically with mental development and health of the athletes.The following season, in 2014, Coach Kent Pagel joined the UCR track program as a throwing coach. Although it took Bell “about a week to warm up to him” the pair developed a strong player-coach bond. Bell attributes this to the fact that “Coach Pagel reminded me of my coach at Laney, he was always setting goals for us.” In her first year of competition at UCR, Bell excelled at the hammer throw and began hitting marks of 164-196 feet that she never thought was possible when she began. Bell said her success came from diligently hitting the weights and practicing her technique with Pagel.

During their meetings together, Saucedo would “help (her) focus on the positives and what I’m doing right. And help me believe that I am strong enough to throw the distance that I want.” Bell believes she has the physical capability to throw in the upper 190s (she is already at the low end of 190) but stresses that she needs to train her mind to the same level as her body.

Due to UCR’s limited indoor track season, Bell’s mental strength has been just as vital if not more so in her success this season, since Bell is at a competitive disadvantage. “Some schools who have more funding will have nine indoor meets, plus a conference championship. We have four at the most,” says Bell. This stark difference in competition means that with three throws per meet, Bell will get nine throws compared to the 27 throws her competition gets to reach a qualifying mark for Nationals.

However, Bell and Pagel have turned the disadvantage into an opportunity to work harder than the rest of the competition and not let it deter them from staying positive. The most recent example of their positivity was at a recent meet where Bell had difficulty throwing on the more slippery ring the school uses. Instead of lamenting the bad performance, Pagel and Bell used it as an opportunity to see the improvements in her form and how she could further improve it.

Both Pagel and Bell know they have worked too hard to make excuses at this point, and Bell believes “nobody wants to hear your sob story. Everyone competing has a story.” Every competitor indeed does have a story and Bell wants her story to be one of a champion and eventually an Olympian, so she wants to invest her energy into making strides forward instead of dwelling on what she cannot control.

Bell’s plans for making this growth is simple: Make a goal for every meet and do everything she can to reach that goal. On April 14, Bell competed at the Mt. SAC relays, and her goal going into that meet was to throw an astounding 209 feet and she believes that mark “is totally possible.” Unfortunately, Bell did not make the mark she set for herself, but she did break a hammer throw school record with 196 feet, which was the second-highest distance in the relay.

Bell is well aware that her ultimate goal of Olympic trials is a difficult one, as the qualifying distance is 240 feet at the least. But Bell does not care how hard it is because she knows “if it were easy it wouldn’t be worth doing” and she embraces the amount of hard work ahead of her. Outdoor track season can last into mid-June if Bell keeps performing at the level she has been. Bell and Pagel intend to make strides every day until then, and they know if they keep working diligently, mentally and physically, that Bell can accomplish any goal she wants.