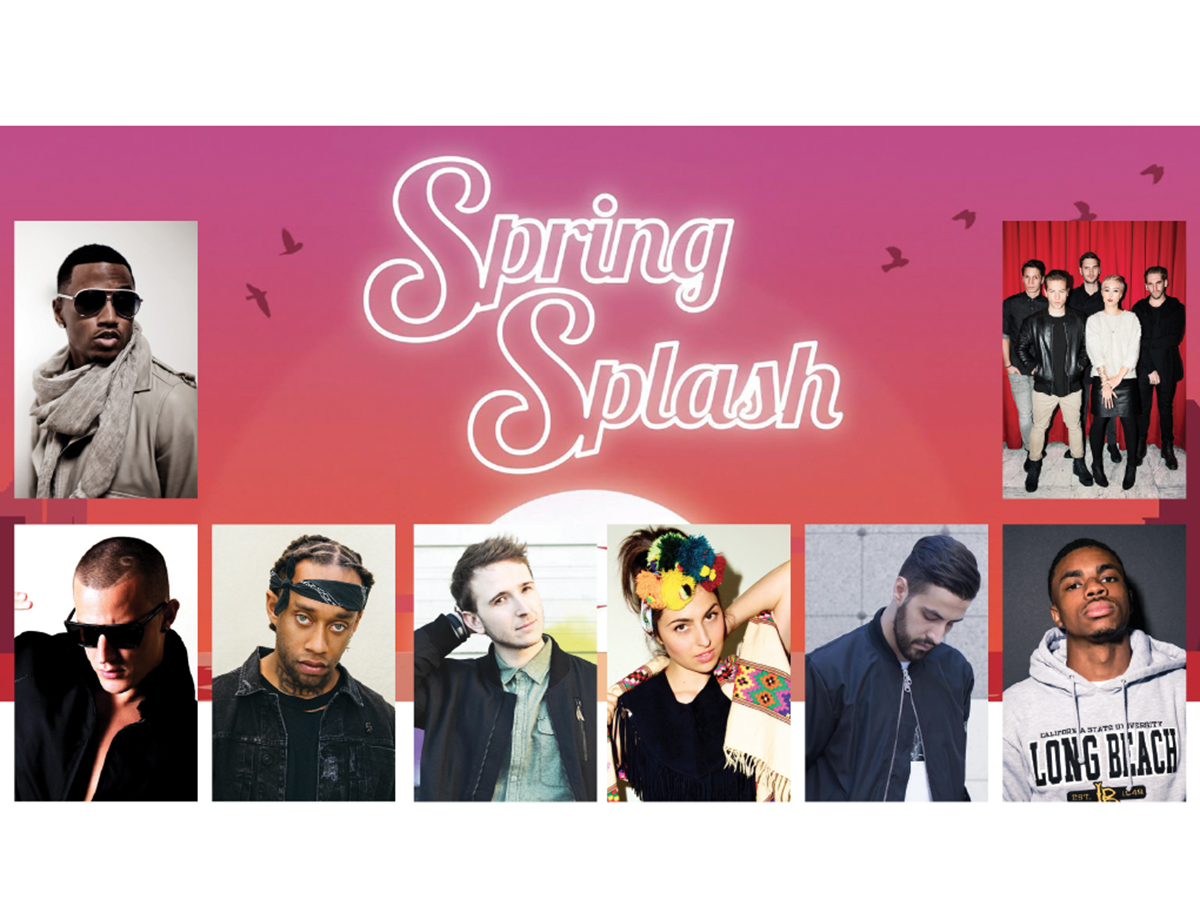 Trey Songz- Spring Splash’s much-anticipated 2016 headliner is none other than Trey Songz. Born Tremaine Neverson, the R-and-B singer caused quite the frenzy when he emerged on the music scene. Hit songs such as “Say Aah” and “Bottoms Up” threw him into the spotlight and, with the help of millions of girls everywhere, helped to keep him there. If you’re somehow unfamiliar with the 31-year-old but willing to give him a chance at this year’s Spring Splash, you can expect a mix of slow jams and party songs about sex, love and navigating relationships. This Grammy-nominated artist is definitely worth your attention.

DJ Snake- DJ Snake is guaranteed to get the crowd moving at this year’s Spring Splash. Famous for hit songs such as “Turn Down For What,” “Middle” and “Lean On,” the Grammy-nominated DJ and producer has created music for artists like Lady Gaga and worked with other well-known DJs such as Diplo and Skrillex. The French artist, whose real name is William Grigahcine, mixes indie, pop and hip-hop to create a winning combination that has earned him the respect of many musicians in the game today. DJ Snake started DJing at the young age of 14 and is undeniably going to show the UCR student body that all those years of hard work has payed off.

Ty Dolla $ign-To start: Ty Dolla $ign is great at what he does. He is not necessarily an incredibly brilliant songwriter, but the hooks on his tracks, as well was the verses he contributes on every one of his features is pure energy. Besides RL Grime, I have a feeling that Ty Dolla $ign’s performance is going to be one of the best at Spring Splash. I can already imagine going wild when “Blase” comes on.

RL Grime- The de facto face of trap, Henry Steinway’s legacy spans over four years and was catapulted into the spotlight with his remix of Kanye West’s “Mercy.” Since the release of his debut album “VOID,” Grime’s sound has taken a shift to a more melodic direction that may be better categorized as future bass, which only speaks to his impeccable versatility as a producer. Countless bangers and sold-out shows later, we find him slated to grace the UCR campus. If you enjoy a high-energy DJ set chock full of ground-shaking bass mixed with a dash of hip-hop, and a crowd atmosphere that can only be accurately classified as organized chaos, check out RL Grime — it’s going to be fucking lit.

Vince Staples- Many Vince Staples fans were slowly introduced to Staples’ downtempo flows through his features on Odd Future tracks. Last year, his first album “Summertime ‘06” was released with much fanfare and critical acclaim. His sound was original, with eerie downtempo beats that play around with jazzy and trappy soundscapes: atmospheric melodies compared with heavy kickdrums. Staples’ lyricism is clever and rounds out catchy hooks to often strange, yet really fun, beats.

Anna Lunoe- One could argue that EDM is a boys’ club, and with good reason. Most of the DJs that non-EDM fans would recognize are the likes of Skrillex and Deadmau5. Regardless, Lunoe is a breakout star, leaving her home in Australia to play festival after festival across North America and Europe. Building a dedicated following and wowing audiences with her performances in spite of her unknown status, Lunoe is equal parts YouTube mainstay and festival showstopper. She’s riding high on the dark energy that pulsates throughout her traps. She’s riding a wave, one that’s bound to wash over at Spring Splash.

The Naked and Famous- While some may gripe that Spring Splash seems to be nothing but hip-hop and club music, it’s nice to see an electronic artist that does more than play with a turntable after they hit the spacebar on their Macbook. The Naked and Famous is that band. Though undoubtedly electronic, their sound is reminiscent of ‘80s new wave with an indie undercurrent. With two albums under their belts and a third in the works, fans of the band may hear some yet-unheard songs during their set, while non-fans who favor other genres may find something they enjoy.

-Robert Lees, Arts & Entertainment Editor
Hoodboi- LA-based DJ Hoodboi is poised to take over the music world very soon. Already having toured with DJs such as Dillon Francis and Flosstradamus, the talented producer and DJ continues to make headlines with his stunning remixes. Hoodboi first started gaining popularity in 2014 with club edits of popular anthems from the ‘90s and he’s gone on to create a DJ crew comprised of himself as well as Promnite, Kitten and Falcons. Hoodboi, whose real name is Roger Schami, has collaborated with other rising DJs and producers such as Alison Wonderland and Lido. With an incredibly bright future ahead of him, you’re not going to want to miss this talented DJ on the Spring Splash stage.