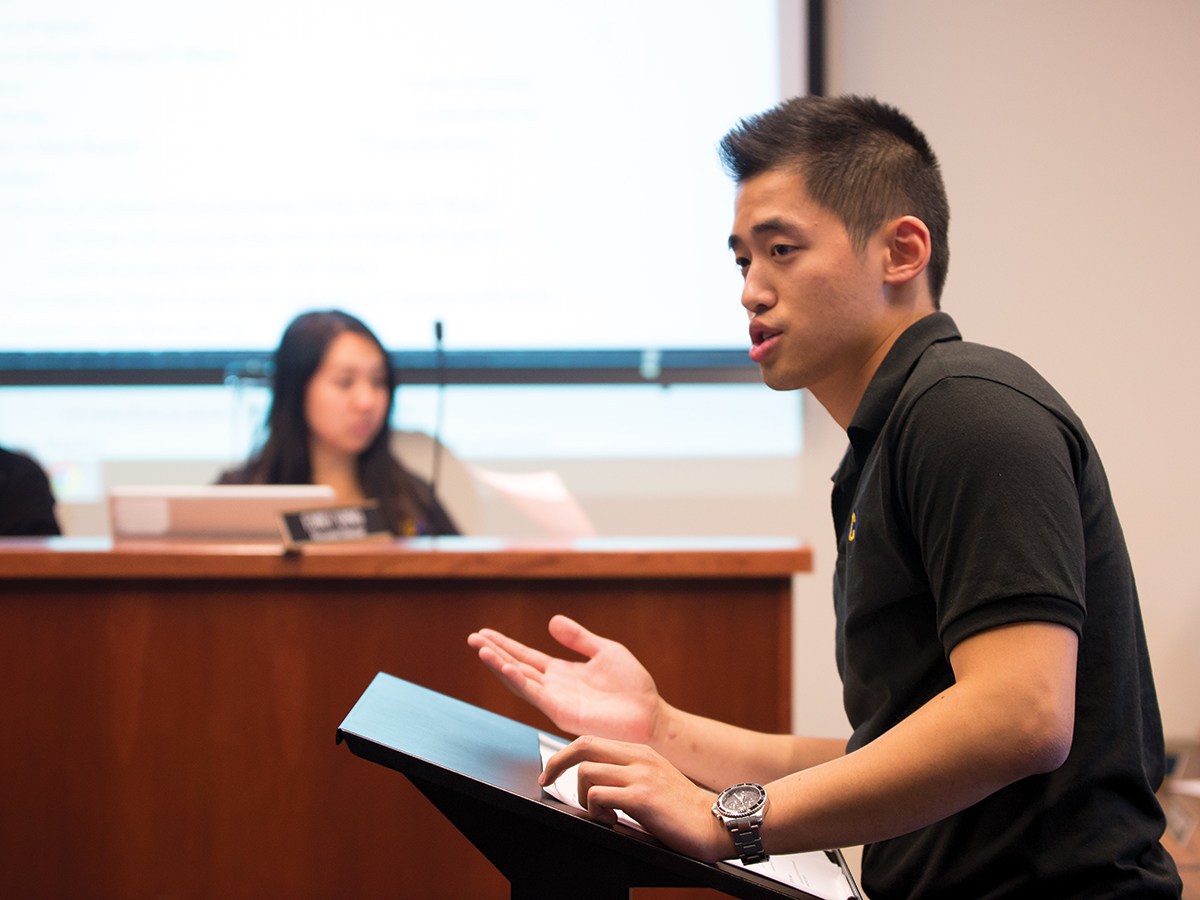 This week’s ASUCR senate meeting saw the continuation of discussion involving the judicial council’s ruling to not validate elections results. ASUCR also passed a resolution calling for the resignation or termination of a “sensitive individual” named Lorraine Jones from the Riverside Community College District because of her mishandling of a sexual assault case.

ASUCR Chief Justice Simon Ho, a fourth-year political science major, spoke to the horseshoe about the judicial ruling to not validate this year’s elections results. Ho read aloud the authority of the judicial branch, the general function of justices and the powers of the judicial branch as outlined in the ASUCR constitution,and described the council as being “the only truly unbiased point of ASUCR.”

“The senate … should be taking the judicial council more seriously in terms of the rulings that are signed by every single member of the judicial council and all the justices,” Ho stated. He further justified their council’s decision after saying that he had spoken to the UCR Office of Campus Counsel and said that they agreed that the judicial branch had not overstepped their boundaries.

“I went to campus counsel in fear of what happened in relation to last year,” Ho explained, referring to when Justice Daniel Ojo sought help from campus administration in addressing last year’s elections controversies.

Ho responded by saying that although it was his decision to talk to campus counsel, the other members of the judicial council were very well informed of this decision. “It wasn’t to seek remedy of any sort; it was just to confirm based on the specialization and law and the legality and the contextual interpretations of these kinds of things,” Ho said.

CHASS Senator Joshua Lopez expressed his concern over how a second elections cycle would would be funded and a new elections timeline approved, all while upholding the elections code. “When you guys executed this ruling, you made it under your best intentions, but did you actually think about the execution of how we can actually make it happen given this policy because we want to achieve the 20 percent voter turnout for the referendums,” said Lopez. Ho advised the horseshoe that these concerns would be answered at the judicial council meeting on Friday.

Justice Jo Gbujama spoke after Ho and explained that during the first two days of elections the elections director received 23 complaints, primarily over laptopping. “Those were complaints that … I personally looked at and we looked at and had a meeting where we came up with the guidelines,” Gbujama said. “It’s not so much that the judicial council is creating legislation, but the aforementioned bylaw (section 10d) basically states that you need the signatures of the … elections director, the executive director and the four justices,” Gbujama explained.

Moving off of the topic of elections and onto public forum, peer mentor Marina Sangit and peer coordinator Kristina Moisa from the group SAVE (Sexual Assault and Violence Education) voiced their issues with ASUCR’s perceived handling of certain events. Sangit expressed her negative reaction to “The Haze,” a tragicomedy written and performed by Heather Marlow on the topic of sexual assault, that had been held on April 19 and how she felt that the genre of a tragicomedy had been a poor way to discuss a topic that she felt was so serious. She also expressed discontent about the lack of a trigger warnings before the event started, to which President Ashley Harano assured her that there had been trigger warnings at the beginning of the event, but that Sangit may have missed them.

Moisa brought up an email that was sent out on April 21 that she felt only advertised the group Highlanders Against Sexual Violence and acted as if it was UCR’s only student-initiated, student-led peer education program on sexual violence and assault, despite SAVE being in its fourth year of existence. Vice President of External Affairs Summer Shafer apologized to Moisa for being the one to send the email after the group Highlanders Against Sexual Violence had reached out to her.

Dinah Muhammad, a second-year student and senatorial candidate who ran with the Orange Party in elections, spoke as a representative of the Diversity Council, which consists of a group of representatives from different programs and centers of Costo Hall, over her concerns that the Beyond R’Margins Conference that took place on April 30 was being inappropriately marketed in association with elections. This was despite the conference being funded by various centers of Costo Hall as part of the Highlander Empowerment Referendum. “The Beyond R’Margins Conference was publicized simultaneously while a particular political party was tabling and campaigning,” Muhammad elucidated.

In response to Muhammad’s comments, Senator Dalshawn Boson explained that the conference was advertised within the buzz of elections to help promote it, but eventually they were separated, saying, “There was a decision made that there must be a complete separation made to the R’Margins Conference and a political party, and from that conversation there was no longer any type of affiliation.”

After public forum concluded, Sammie Ayoub, a student-trust elect at the Riverside Community College District (RCCD), elaborated on the hiring of Lorraine Jones. Prior to the hiring of Jones at the RCCD, she had been accused of mishandling the rape case of Aarefah Mosavi during her time working at Mount San Antonio College. After Ayoub read Mosavi’s story, a resolution formally asking for the resignation or termination of RCCD Director of Compliance Jones was unanimously passed by a standing vote.

Next, President Pro Tempore Corey Willis read aloud the changes and additions made to the elections code. Willis presented the new definition of verification of elections results and the other bylaw code changes. “Judicial’s understanding of what verification meant is that they thought it gave them the right to validate or to not validate. It is my personal opinion and the opinion of some of the members of the LRC (legislative review committee) that they did not have the ability to do that as I mentioned earlier.”

Arturo Gomez, an independent candidate who ran for president in this year’s elections, countered the changes made in the elections code asking, “What purpose does changing the elections code here serve in regards to the judicial council’s current mandate?”

“The point of this is that judicial’s interpretation of what verification meant is differed from what the senate believed verification meant,” Willis replied. He further explained that the senate did not agree that the language of the elections code allows for the judicial branch to decide whether or not they wanted to validate the elections results. “The point of changing this … is more to expand upon … what verification means.” Changes in the code only allowed the refusal of validation of elections only if a third-party vendor notified that there was a technical error in the numbers they provided.

Amendments made to part 5, item 9, section A of the elections bylaws, adding the definition of verification of elections results, were approved by a vote of 12-0-1. Changes made to part 6, item 1, section A, amending who is allowed to call for new elections, were also passed with a vote of 11-0-2.