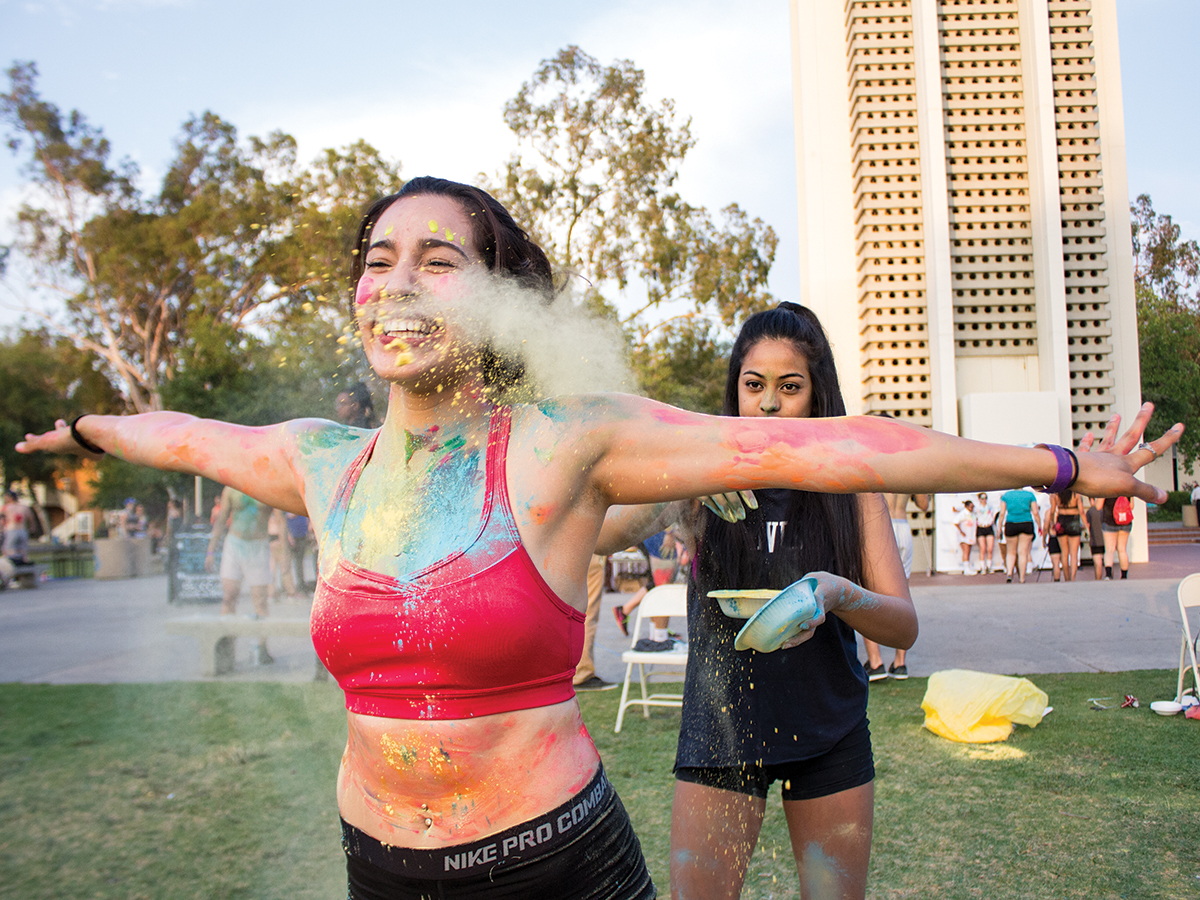 Therefore, “undressing” ourselves from these facades can not only break down barriers that prevent us from connecting with others but also help us accept our bare, naked identities rather than the mask of conformity that society imposes on us.

This was the purpose of the first Undie Run, which occurred at UCLA in 2001: To allow students to unashamedly put themselves out there — literally — to promote body positivity.

On Tuesday, May 17, ASUCR brought the tradition back to UCR by hosting their sixth annual Undie Run at the Bell Tower, except, according to CNAS Senator Melissa Vargas, “(we) want to redefine what the undie run is. (We want) people to be comfortable with who they are. We want to promote body empowerment. We just want people to feel ok with who they are and love themselves.”

Not only did the Undie Run exist to spread positivity but also to raise clothing donations for ASUCR’s R’Closet project, which provides generously donated clothing for students who may not have the means to purchase them. This mission ties into that of the Undie Run because they both reflect how ASUCR aims to make students “feel proud of who they are and love themselves,” said Vargas.

Indeed, at 6:30 p.m., 30 minutes before the first run started, the students surrounding the Bell Tower were being painted and powdered with self-love as they splotched one another with colors from the “Body Empowerment” station. The station allowed  students to highlight their physical features and pronounce the individual magnificence of their own body.

Upon decorating themselves with pigments of body positivity, students could proudly model their vibrant bodily artworks by taking pictures at the photobooth. They could even take pictures on Snapchat with an individualized UCR Undie Run filter.

To give context to the event, chalkboards scattered around the Bell Tower read important statistics regarding body image, such as, “58% of college age women feel pressured to be a certain weight. Approximately 91% of women are unhappy with their bodies.”

As it neared 7 p.m., the Bell Tower became more colorful as more runners appeared. Many of the guys wore flamboyant underclothes, such as tight, pink underwear and zebra-striped thongs, while the girls generally wore Spandex shorts and sports bras. Whether someone’s attire was prominently flashy or slightly conservative, the Undie Run — which spanned past Watkins, behind Rivera Library, past Orbach and back to the Bell Tower across the Life Sciences buildings — paved a safe space in which everyone was accepted for who they are instead of what they wore.

Afterall, the flyer for the event said, “(runners) can wear whatever (they) are comfortable in, whether (they’re in their) underwear or fully-clothed.”

Meanwhile, anticipation accumulated as DJ’s Ernest Ho (Echo) and Randy Huang (RND) lit up the afternoon air with an exhilarating mix of electro-R-and-B and disco, from Omarion’s radio hit “Pose To Be” to “Love Never Felt So Good” by Michael Jackson.

Finally, at exactly 7 p.m., Vargas completed a five-second countdown over the intercom and a vibrant streak of approximately 40 runners in unique, personalized undergarments dashed across the Bell Tower and toward Watkins Hall.

Although it may have been a peculiar sight for onlookers to see a crowd of stripped-down male and female students jogging across campus, it was undeniably liberating. Third-year sociology major Rori Pang said, “My favorite part has been running with friends half-naked.” Even more than just unifying with friends to promote a common cause — these students were boldly defying every barrier that would have otherwise separated them into exclusive groups to have fun and take a run together.

At 7:27 p.m., the first runner returned and the rest gradually followed. They were clearly tired, for their faces were red and they were panting. However, many of them looked to the ground and smiled to themselves knowing that they had accomplished something great and took pictures with their friends to commemorate the special moment.

Fourth-year psychology major Jonathan Caplan said, “I felt tired …(but) it felt good to feel comfortable with my body and see everyone else doing it because not everyone’s perfect.”

For the remainder of the hour, five more runs took place and after each one, the same proud, joyful smiles graced the finish line. Not only had these participants just completed a noteworthy run but they had also manifested a brave statement on behalf of the entire student body: All of us can come together and accomplish great things when we are “stripped down” of our barriers and united as our most “naked” selves.