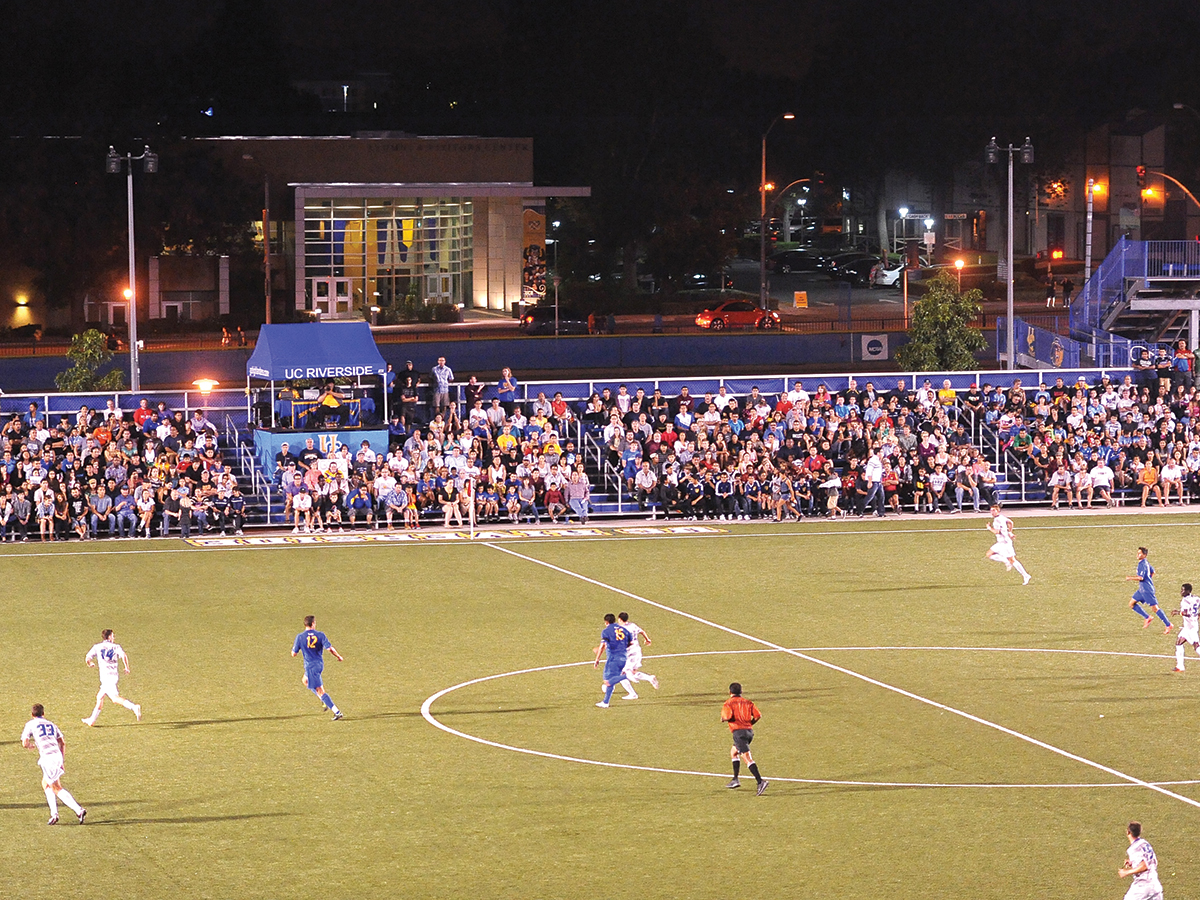 It truly takes a village to cover and recap all 17 Division I sports at UCR. The stats and stories on gohighlanders.com do not get there on their own nor do the interviews of coaches, teams and players that the Highlander feature do not coordinate themselves. All of these things are handled by the two-man village, populated by John Maxwell and Jeremiah Smith, that is UCR’s Media Relations Department.

Describing the average workweek for Maxwell and Smith is a difficult task, since their work never ends. As Maxwell and Smith explain it, “everyday is Monday around here,” and there is always plenty of work to be done. Their week starts with recapping the previous week’s stories and updating stats, then they prepare for their coaches’ radio show that airs every other week. The radio show allows for listeners to connect to UCR coaches on a more personal level as well as keep up with their respective teams.

Of course, all the home games they work have to be operated as smoothly as possible, so Mondays feature a communication meeting about any and all game-day operations. This involves working with the entire game-day staff in order to ensure that fans and players have the best experience possible.

When Maxwell and Smith are not in the office tracking stats and compiling stories, they are out traveling with the teams they cover. While UCR’s men’s and women’s track and field was trying to complete competition despite tornado warnings in Kansas, Maxwell was there updating stats and keeping the UCR community up to date. If you like tracking golf stats in the Arizona desert, then Smith can tell you all about his experience covering the men’s golf team in their regional tournament.

While the duo has their own designated sports they cover, they also help each other stay on top of everything from honoring alumni at games to writing the recap of the UCR-Hawaii game that ends at one in the morning. Smith mentions that the pair “understands one another’s areas of common error,” so they can edit each other’s work, especially with weekends jam-packed with competition. To put it lightly, Maxwell and Smith operate in a fast-pace and demanding work environment. When asked if the duo had a full plate, Maxwell more than agreed. “It’s on the plate, on the table and it’s falling on the floor,” to which Smith added with a smile, “and the chef is cooking more.”

While Maxwell and Smith love to see the UCR athletic programs succeed in competition, they also want to see these programs succeed in impacting the community. Maxwell notes the efforts that all the coaches and players make to help the community, whether it be youth camps or letting local kids run the bases at baseball games. These events are exactly what Maxwell and Smith want for the university as a whole, explaining “not every kid that comes to a camp will play Division I athletics, but they might have a great time while they’re here and decide to come here.” Ultimately Maxwell and Smith want to see the attendance of all UCR sporting events packed with students and community members to reciprocate the support the teams give to the university and the community.

Now, wanting to make positive impacts on the community is probably what you would expect those who work in media relations to say, but Maxwell and Smith truly believe in it. For Maxwell, he wants to see UCR’s sports culture grow to resemble his alma mater, Davidson College. “(Davidson) is a small liberal arts school that values its academic reputation way more than its athletic reputation, but it has a really nice balance between academics and student athletes, to the point where people who go there and compete there have a great experience and then give back,” Maxwell explained.

Smith echoes Maxwell’s sentiments, stating that he wants to see UCR “win and dominate in this area … we have an opportunity to grow from the inside out. People in the community have not had the experience of coming to a Division I sporting event and may think of professional teams 50 to 60 miles away, but they don’t realize they can get that same experience here.” Smith also wants to see the athletic reputation of UCR match the academic reputation the university has, mentioning “we have very notable educational programs in biology and agricultural science, and if we can build our athletics to match that, that would be ideal.”

At the end of the day, Maxwell and Smith run their two-man shop, no matter how much chaos is involved, with a great deal of pride. But they are not running it for their own personal gain, they do it for the athletes, the coaches and the students of the university. They want to see that the community and the university are intertwined with one another to form personal bonds between community members and university members. To quote one of the most well-known sports movies of all times, “Field of Dreams,” “if you build it, they will come,” and UCR’s dynamic duo of media are going to continue to build it.