Highlander
Home Features “A Symposium: Towards a Critical Refugee Studies” presents art as a place... 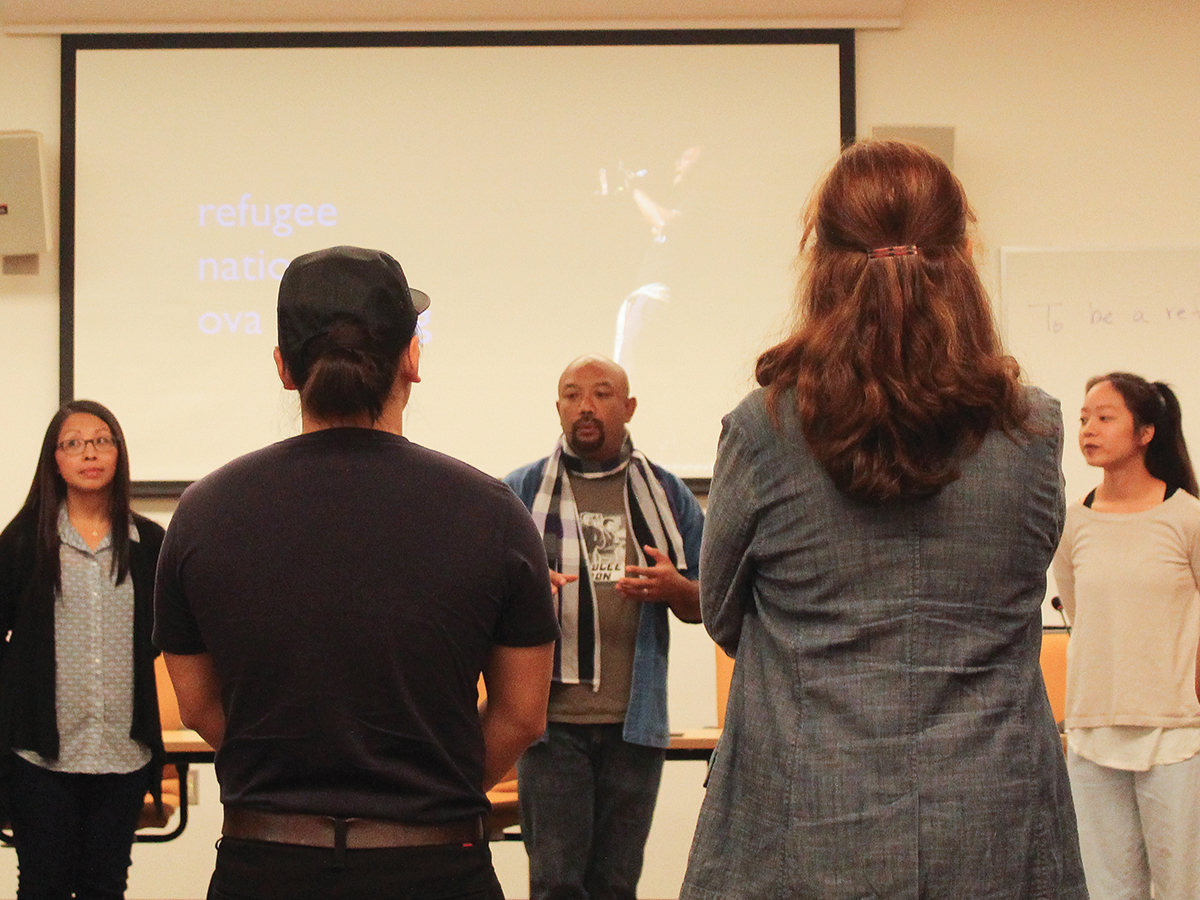 “Today I have brought with me my grandmother,” said a participant during an ice-breaker led by Ova Saopeng, creative director of the theater production Refugee Nation. “Without her coming here after (the) Vietnam War, I wouldn’t be able to be standing with you today as a second (generation) here in the U.S. Aloha.”

To start off the “A Symposium: Towards A Critical Refugee Studies” conference, audience members were required to present a memory of someone who was responsible for their presence at that time and place, which, more specifically, was Wednesday, May 25 in INTS 1113 and 1128.

What the activity aimed to achieve, however, was not an explanation of how they physically got up from their beds that morning to get in their cars and go to the conference room but to introduce a narrative from a collection of academics and creatives to voice and shed light on the often quiet and invisible roles of refugees.

“’Without her coming here after (the) Vietnam War, I wouldn’t be able to be standing with you today as a second (generation) here in the U.S. Aloha.’”

Although the term “refugee” is globally recognized to mean anyone who flees their country to escape persecution, many people who are labelled as such feel as though they are being unfairly differentiated from other U.S. citizens as being a mere “other.” Although the conference consisted of artists and scholars from different backgrounds, upbringings and careers, each one of the presenters expressed the same reluctance toward being called a refugee and were thus united by what they were separated with.

Duong mentioned during a Q-and-A session by the discussion panel that “refugees are made to feel like others or (are pressured to become) more familiar with American culture (because native citizens) are less reluctant in accepting refugees.” She offered an example from 1975 when hundreds of thousands of Hmong civilians immigrated to the United States due to the collapse of the communist party in Laos. A large number of these immigrants converted to Catholicism in hopes of being accepted by their American peers, but many were still viewed as “others” and were subject to discrimination.

“…many people who are labelled as such feel as though they are being unfairly differentiated from other U.S. citizens as being a mere ‘other.'”

For decades the United States government tampered with classified archives and documents to cover up their unethical affairs in the Vietnam War, furthering migrants’ disconnect toward their communities and blurring their cultural backgrounds into obscurity. The concept of secrecy as it relates to the discussion of cultural erasure was expanded upon by Ma Vang, an associate professor at UC Merced and the author of “The Refugee Soldier.” The secrecy that the U.S. employed to cover their tracks has been very costly to the refugee communities that were displaced from their homes. Over 3.8 million citizens were uprooted by the bombings and many were forced into aiding the United States military overthrow the Vietnamese Liberation Army. This process of erasure is used to rid America of its guilty conscience but ends up destroying remnants of the past for the victims who are displaced.

Despite the adversity impelled upon these citizens, it was apparent, through their vivid dialogues of contemporary America and heated passion for justice and recognition in their works, that art offers a space for them in which their stories and diversity are embraced. Poet Mai Der Vang, winner of the 2016 Walt Whitman Award, said, “As I wrote, I started to hear the voices of my ancestors. I write for the ancestors, what they couldn’t say, then what I wrote for the community. Writing for the voices they couldn’t say.”Through a much different medium but nonetheless communicating the same grievances, a rapper named PraCh, whose family immigrated to the United States from Cambodia during the 1970s, used rap as a means to express himself and provide social commentary on the poor living conditions of Asian immigrants in urban America. In “The Great Escape,” he discussed not only fleeing to the border near Thailand when the Vietnamese Liberation Army took over Cambodia but also the constant strife of trying to escape from poverty and poor living conditions in America, which came in the form of living in the projects, growing up on welfare and being endangered by the prominent riots and violence in LA at the time.

“…’art,’ as Duong put it, ‘(provides) a space of refuge … where we can share safely our practices and theories.'”

The ceaseless spirit that each of the artists have invested into their work conveys that although they may not have the safe space they dreamed they would obtain in America, “art,” as Duong put it, “(provides) a space of refuge … where we can share safely our practices and theories.”