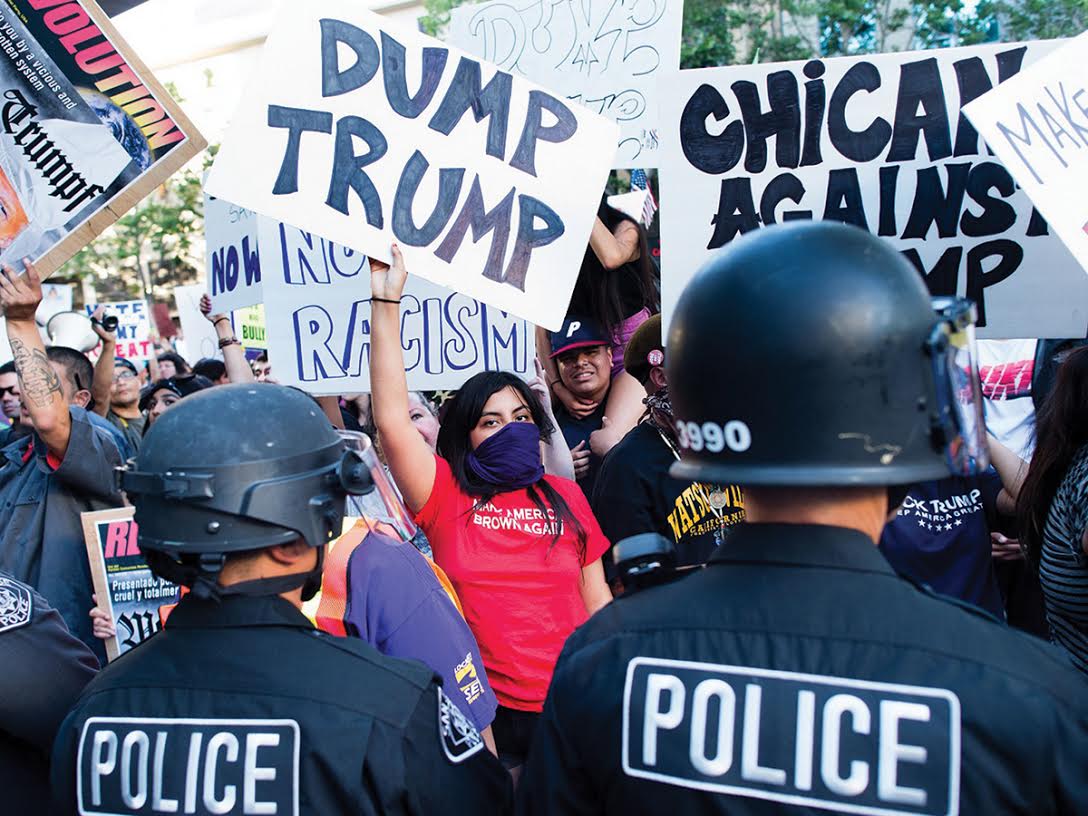 Like how sausages or babies are made, democracy has an ugly side that has been exposing itself in the wake of presumptive GOP presidential nominee Donald J. Trump’s travels around the nation. With riots becoming a common occurrence at every stop he makes, some local politicians have not only taken a weak stance against the violence, but have been disingenuously using it to score political points.

When Trump held a rally in San Jose the police apparently did not have enough manpower to cope with the violent protesters and left Trump supporters open to being freely assaulted. San Jose Mayor Sam Liccardo, an ardent Clinton supporter, quickly opted to condemn Trump instead of focusing on the actions of the real troublemakers by saying, “It’s a sad statement about our political discourse that Mr. Trump has focused on stirring antagonism instead of offering real solutions to our nation’s challenges.” Liccardo later told the Associated Press that, “At some point Donald Trump needs to take responsibility for the irresponsible behavior of his campaign.”

When his weak leadership resulted in mayhem, Liccardo attempted to shift the onus to Trump, implying that the protesters smashing noses and stomping on cars on his city streets were not on account of his poor governance, but a presidential candidate’s words. California state law mandates that the office of mayor be a nonpartisan position, presumably to keep the focus at the local level. But, Liccardo ignores his mistakes and glosses over the violence to focus only on what he cares about: Political points for his party at the national level. The well-being of his city comes second.

I smelled the smoldering anger and saw the conflict firsthand when I attended the Trump rally held at the San Diego Convention Center last month. The crowds that cause ruckus outside of every Trump rally were there although, unlike in San Jose, the police struck the perfect balance between restraint and authority, meaning there was no chaos.

However, at the 11th hour of the protest, comes Bryan Pease, a candidate for city attorney of San Diego. This was long after all the Trump supporters were gone as were a majority of the anti-Trump herd. Pease stuffs his pocket with bail money and arrives when the police move in to arrest the handful of protesters that remained in an isolated pocket far from where the rally was held. With no goal other than to get arrested as a political stunt, he succeeds in antagonizing the police and is thrown in jail.

“Most of the people behind held were falsely arrested under similar circumstances,” wrote Pease on his Facebook. “When I’m city attorney, the police department will be required to respect free speech and not treat people like this.” What Pease neglected to mention was how the police had garbage thrown at them, were repeatedly provoked and the fact that protesters were blocking a major city thoroughfare and refused to disperse despite countless warnings over the course of a long period. It comes as no surprise that he finished last in a field of five candidates. The voters of “America’s Finest City” roundly rejected such a repulsive brand of politicking. The position of city attorney must be occupied by someone with respect for law and order, not someone who tries to rouse sympathy for lawbreakers to win attention for his campaign.

There is nothing more un-American than attacking someone else’s right to free speech. For these politicians to even suggest in the slightest that somehow a group deserves to be targeted for their beliefs is against everything the first amendment stands for. It wasn’t designed to protect beautiful speech after all. Politicians across the nation at all levels must take a firm stand and stop these mobs from ruling the streets whenever the candidate that they disagree with comes to town.