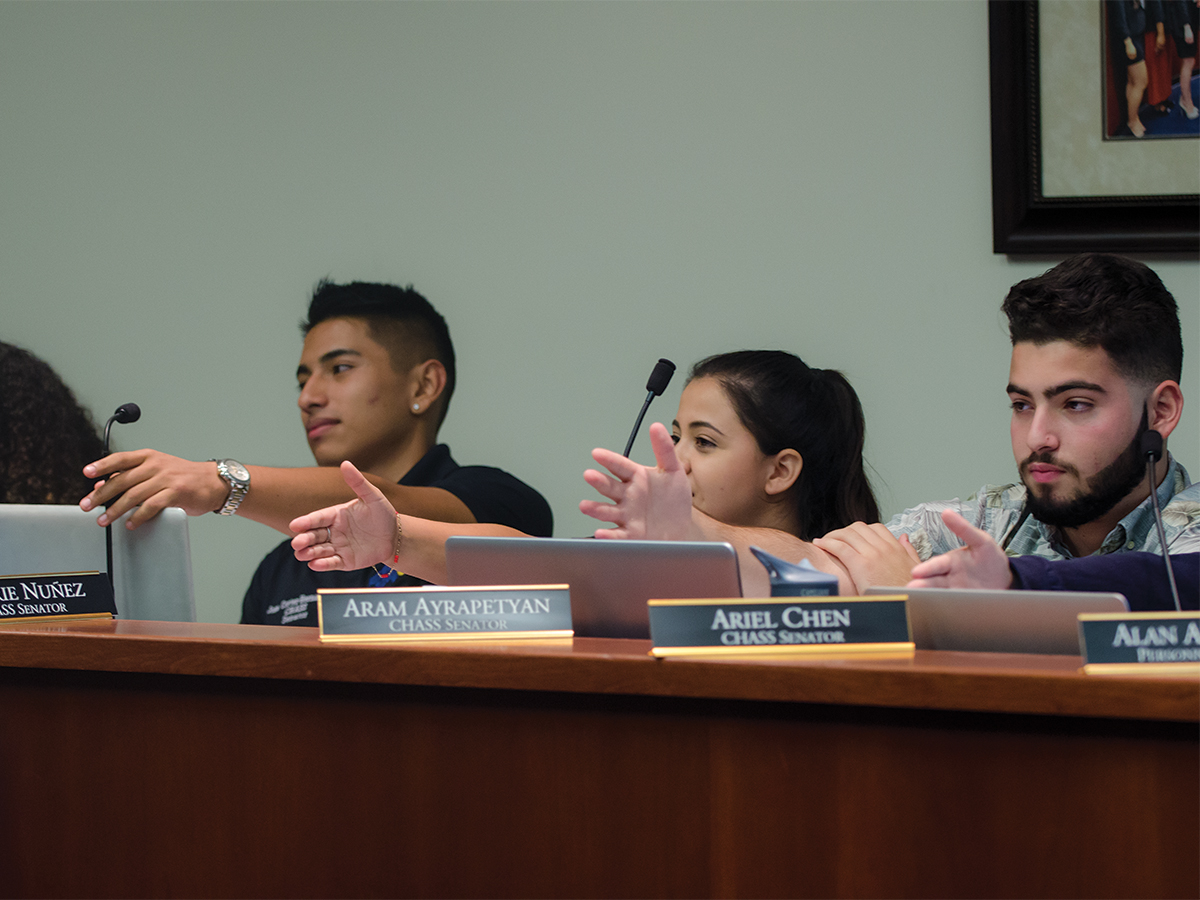 ASUCR held its second state of the association meeting on Wednesday, Oct. 28, in which they passed two resolutions — one in support of Proposition 55, and the other encouraging transparency throughout the process of the demolition and relocation of Canyon Crest Family Student Housing. An outline of the 2017 elections timeline was also approved.

During the Green Campus Action Plan (GCAP) committee report, a GCAP grant of $4,000 was allocated to the building of a hydration station near the Bell Tower, with approval of 13-0-0.

President Pro Tempore Johnathan Li presented the legislative review committee report, beginning with Senate Resolution F16-001— a resolution in support of Prop 55, which will be on this year’s California ballot. If passed, Prop 55 will continue the measures created by Proposition 30 passed in 2012, in which the increased tax rates imposed by Prop 30 would continue to be used for education and healthcare funding. Support for the resolution was unanimous.

Li then yielded his time to CHASS Senator Jose Cortez-Hernandez, who presented a resolution entitled, “Resolution in Demand of Transparent and Consistent Updates in regards to UC Riverside Master Plan and statistics involving Family Student Housing.” The resolution calls for transparency in regards to the demolition of Canyon Crest Family Student Housing and relocation of existing residents, as outlined by Chancellor Kim A. Wilcox’s, “UCR 2020: The Path to Preeminence.”

In response to the UCR 2020 plan, Vice Chancellor of Auxiliary Services Andy Plumley established the Family Housing Transitional Committee to assist in the process of moving students and their families from family housing by July 14, 2017. Cortez-Hernandez pointed to the implementation of this committee as an example of the lack of transparency from administration, as it does not include students outside of the family housing demographic.

“This committee wasn’t … really made public to the students at all because I didn’t know about the committee until I personally spoke with him (Plumley) myself,” Cortez-Hernandez explained. “So pretty much … we’re advocating for a representative from ASUCR to sit on that committee and relay information that’s discussed in those meetings back to the senate, and hopefully back to the student body.”

The resolution also, “demands Vice Chancellor of Auxiliary Services, Andy Plumley provide transparent and bi-monthly updates in regards to the master plan and housing statistics for Canyon Crest Family Student Housing locations and facilities to the entire student body of UC Riverside.” The resolution was passed with a vote of 12-0-0.

During executive cabinet reports, Executive Vice President Wen-Yu Chou discussed working with Li to begin hosting workshops aimed to educate senators, as well as other UCR students, on how to write legislation.

Lastly, Elections Director Marcy Kuo presented the elections timeline for 2017. Kuo announced that elections would continue to be a three-week-long process, in an effort “to uphold our motto that we are students first.” Campaigning will take place during the first two weeks of spring quarter and elections will occur during week three, according to Kuo. Candidate debates will now be held on both Wednesdays and Thursdays during the elections cycle, with elections results set to be announced the first week of May. The timeline was met with approval of 11-0-0.