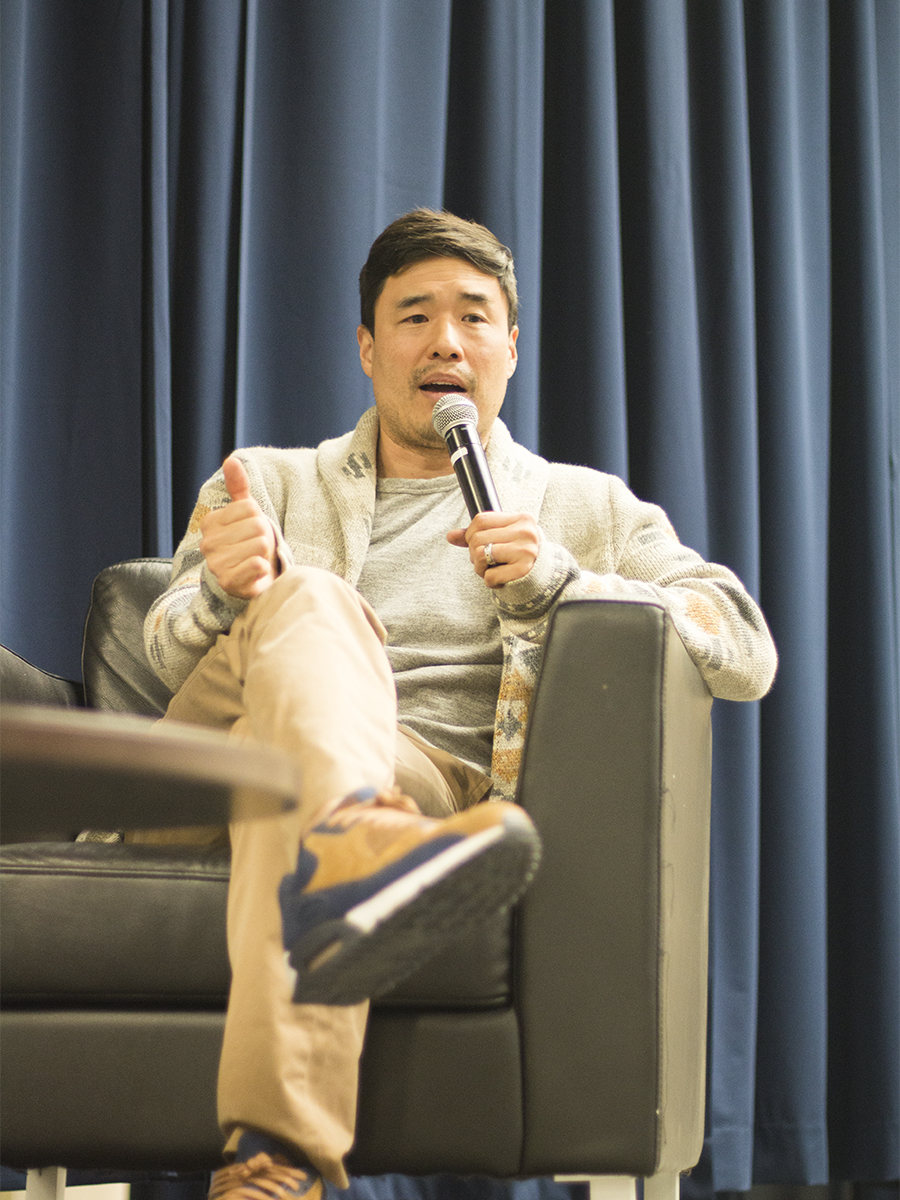 I have nothing to lose and even if I don’t make money off this — even if I’m broke — at least I’m doing what I love.

On Tuesday, Nov. 22, Asian Pacific Student Programs welcomed actor Randall Park to UCR for their lecture series. Park currently stars as the funny and loving father on ABC’s hit comedy show “Fresh Off the Boat” and has graced the big screen in comedies such as “The Interview” and “Trainwreck.”

Despite it being near Thanksgiving break, a good number of excited students walked into HUB 302 and took their respective seats. “It’s so important to see minorities being portrayed in the media,” Brenda Rendon, a first-year political science major, commented in regards to why she showed up for the event. Her friend Selena Razo, a first-year media and cultural studies major, added, “The industry mostly showcases the typical Caucasian family. It’s nice to see an Asian-American family on ‘Fresh Off the Boat.’”

It’s so important to see minorities being portrayed in the media.

The moderator for the evening was Donatella Galella, a theatre history professor at UCR. She introduced Park, who was greeted with enthusiastic applause, to the stage. Galella opened up the evening by asking Park a series of questions concerning his acting career. Park discovered his passion for acting as an undergrad at UCLA, where he studied English and creative writing. “I didn’t know what I wanted to do with my life,” Park remarked. “Then a professor said, ‘You should write; you’re a good writer.’” From that point on, Park delved into playwriting and soon found himself acting in theater groups at school. “I knew in the back of my head that I wanted to be an actor for a living,” Park recalled. As with any actor’s journey to success, Park faced a handful of challenges, but that didn’t stop him. “I was working these regular jobs to have a living, but what was constant was the fact that I was performing on the side,” Park noted. After going back and forth with different professions and experiencing a terrible break-up, Park decided to truly chase after his acting dream.

Park then addressed the issue of being an Asian-American actor. Since the room was mostly filled with Asian-American students, everyone sat up in anticipation for what he was going to say. Park noted that he had an entire community behind him that has been underrepresented in the industry for a long time. Park had to choose his roles wisely because he wanted to represent Asian-Americans accurately and that involved refusing roles infused with stereotypes.  “The industry and my parents were telling me my dream was impossible,” he remarked. But Park didn’t let that bother him. His passion was acting and no one could change his mind. When Park reached his late 20s, he came to a point where he simply proclaimed, “I have nothing to lose and even if I don’t make money off this — even if I’m broke — at least I’m doing what I love.” Park sharing this changed the tone of the conversation, for it reminded everyone that they should not listen to what people want them to do but instead pursue what they truly desire.

Galella then asked about his experience on “Fresh Off the Boat,” which stars the first Asian-American family on network television since 1994’s “An American Girl.” “There was a lot of pressure on us,” Park commented. “Most shows just have to deal with being good and getting ratings, but we had to make sure we were doing right by the community.”

Most shows just have to deal with being good and getting ratings, but we had to make sure we were doing right by the community.

Galella asked, “What impact do you want this show to have?” to which Park responded, “I hope the audience really feels the warmth of the family. I also want this show to reach across the board. You don’t have to be an Asian-American to enjoy this show.”

Park left the stage and the audience with a little ounce of courage that they originally didn’t have. He’s not only gaining national recognition for being an actor in general but he’s also proving that Asian-Americans hoping to fulfill a career in the entertainment industry may achieve this dream despite the limits the industry may place on minority groups.The evening then segued into a Q-and-A session with the audience. One audience member asked about Park’s experience portraying North Korean dictator Kim Jong-un in “The Interview.” “Other people were more worried for my life than me,” Park joked. “People would come up to me in the grocery store and ask, ‘Why aren’t you in hiding?’”