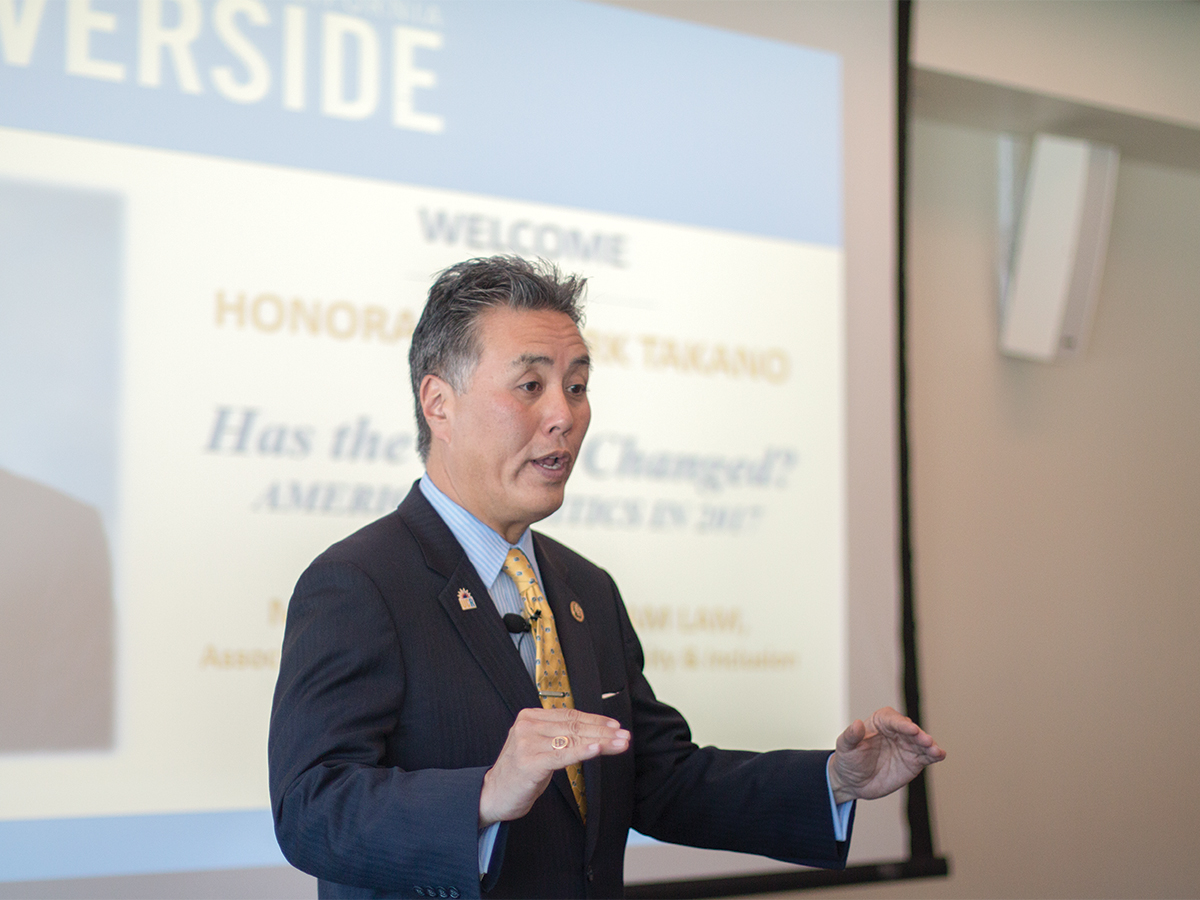 On Tuesday, Jan. 17, Rep. Mark Takano (D-CA) visited UCR to discuss the incoming Trump administration and how he believes the political landscape is going to change in 2017. During the event, titled, “Has the Game Changed? American Politics in 2017,” Takano held a one-hour Q-and-A session in HUB 355, in which he opened up the floor to address the various concerns that members of the Riverside community have about the incoming president and potential U.S. policy.

Takano began by addressing the question in the title of the event, to which he replied simply with, “It has and it will change.” From there on he made the decision to delve right into students’ questions, the first of which pertained to the protection of diversity and the inclusion of people from all backgrounds into the political landscape. Takano answered the question by stating that, “There seems to have been some moderation since the (Trump) campaign … we just don’t know if what he said will be translated into policy or action.” Takano acknowledged that while his words do not bring much peace of mind, it is important to stay hopeful.

Next was a question in regard to California’s clean air initiative and whether it will still be upheld under the new administration and Congress. Takano admitted that Trump’s nomination of Scott Pruitt to head the Environmental Protection Agency, especially considering Pruitt’s denial that climate change exists and the fact that he has sued the agency in the past, is concerning. He explained how science used to be bipartisan and that all that he could do now is monitor the libertarian initiative to create more states’ rights in order to help preserve California’s climate laws as well as help to progress environmental standards. He also stressed the need for scientists to be effective political commentators in order to better create bipartisan discussion on the issue of climate change.

Another question asked was why Takano decided to be one of the over 60 congressmen and congresswomen who refused to attend the inauguration on Friday, Jan. 20. Takano explained that while he was continually debating whether or not to go, he never wanted to make a big deal about it by going public with the decision. It was not until President-elect Trump attacked Representative and Civil Rights Leader John Lewis (D-GA) on Martin Luther King Jr. weekend that Takano decided to publicly announce his decision to not attend.

After the event, Takano discussed, in a private interview with the Highlander, what the future of bipartisanship is in the government and the increasing costs of higher education.

On the issue of bipartisanship Takano pointed out that while “Congress has been highly partisan for a number of years,” much of Trump’s political agenda are at odds with what the Republican party has historically stood for. One of the examples that Takano gave was of how the “Republicans tend to be in favor of things like Trans-Pacific Partnership and in favor of trade agreements such as NAFTA (North American Free Trade Agreement)” as well as “a hawkish position in regards to Russia.” He added, “It remains to be seen how much cover the Republicans of Congress are willing to give to a Republican president who is very much at odds with their political agenda.”

Lastly, when asked if he would sponsor legislation that would make higher education more affordable or free, as he has previously done in the past as well as sponsor pro-student legislation, Takano stated, “Yes. I don’t know if I believe in completely free education, though. At one point higher education was conceived of in California as free under the California Master Plan for Higher Education. In reality it was never really free but it was far more affordable.” He also added how there is a need to generate the will to create political action because it is not fair that the current generation of university level students have a much larger burden than previous generations.

UCR students also weighed in on these issues. A first-year pre-business student (who wishes to remain anonymous) said, “People say that America should educate its people more. But increasing tuition stops this because not everyone can afford this.” A first-year CNAS student (also requesting anonymity) added, “It makes me wonder what they are doing with all of the money since UCR is so overcrowded that some students aren’t able to graduate since the classes they need are full.” The CNAS student continued, “People look at things only economically and not how it will affect America.”

Between the students and Takano, the sentiment for the coming year appears to be the same: “Hope for the best and plan for the worst.”