At the center of the dimly lit theater room at the Culver Center of the Arts sits Jill Alexander Essbaum, bespectacled and sporting a colorful green dress. Essbaum is a noted American poet and novelist whose recent debut novel, “Hausfrau” published in 2015 was a New York Times Bestseller. Her work has been frequently anthologized in publications such as “Best American Poetry.”

On Thursday, February 9, Essbaum was a guest of the Inlandia Institute, an organization based in the Inland Empire which promotes the work of local writers. The program, titled, “Conversations at The Culver,” brings together local poets and writers to read and discuss their work at The Culver Center of the Arts in downtown Riverside, and Essbaum was specifically discussing “Hausfrau,” which tells the story of an American woman named Anna living in Zurich. Touching on themes as diverse as motherhood, depression and even national identity, this touching novel has won accolades across the country.

The conversation began with Essbaum providing details about her time in Zurich, which led her to write the novel. She spent a few years living in Sweden with her ex-husband, which she described as a difficult period in her life. As Essbaum suggested, however, the character Anna was not exactly based on her, but the trajectory of the novel was based on her time spent in that city. She began working on this novel after she left Zurich and settled in Southern California.

As Essbaum began reading a section from the novel, the members of the audience were rapt with attention, listening to the flow of language as she read from her polished, detailed prose. After she finished reading a short passage, the curator of the event Cati Portner, who is also the director of the Inlandia Institute, turned to the audience for questions. I was able to comfortably ask her whether writing a novel was difficult, given her background primarily in poetry, to which she replied, “I wrote it the way I write poetry: Word after word, after word. But it took longer and knowing I had to come back to it and comb through it for editing was challenging.”

The overall atmosphere of the theater lent an intimacy to the entire event underscored the casual nature of the conversation between the audience and acclaimed author. Audience members asked questions ranging from how she found an agent to the backdrop of her writing. Commenting on the divergence of subjects from her poetry, an audience member asked whether the novel was less focussed on religion and spirituality than her poetry. Essbaum stated that she did in fact include passages about religion, but wanted to “answer some of the more existential questions about God.”

Moreover, she continued by discussing her favorite authors and how they inspired “Hausfrau.” She stated, “Joyce Carol Oates is an author who I always come back too, and when she retweeted me that was like the most exciting moment.” But she also said the two novels which were her major influences for writing this were “The Virgin and the Gypsy” by D.H. Lawrence, as well as “Madame Bovary” by Gustave Flaubert.

After Porter concluded the event, Essbaum passed out custom stickers which she made for the release of her novel, and met audience members to sign copies of her novel. The Conversations at the Culver event provided an illuminating discussion with a talented novelist. 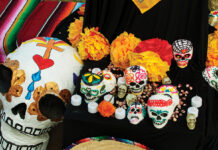 Honoring the spirits of lost loved ones with Concheros, Mexica Art at UCR 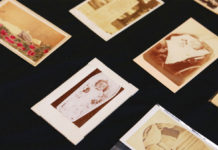 Embracing the spirit of memento mori