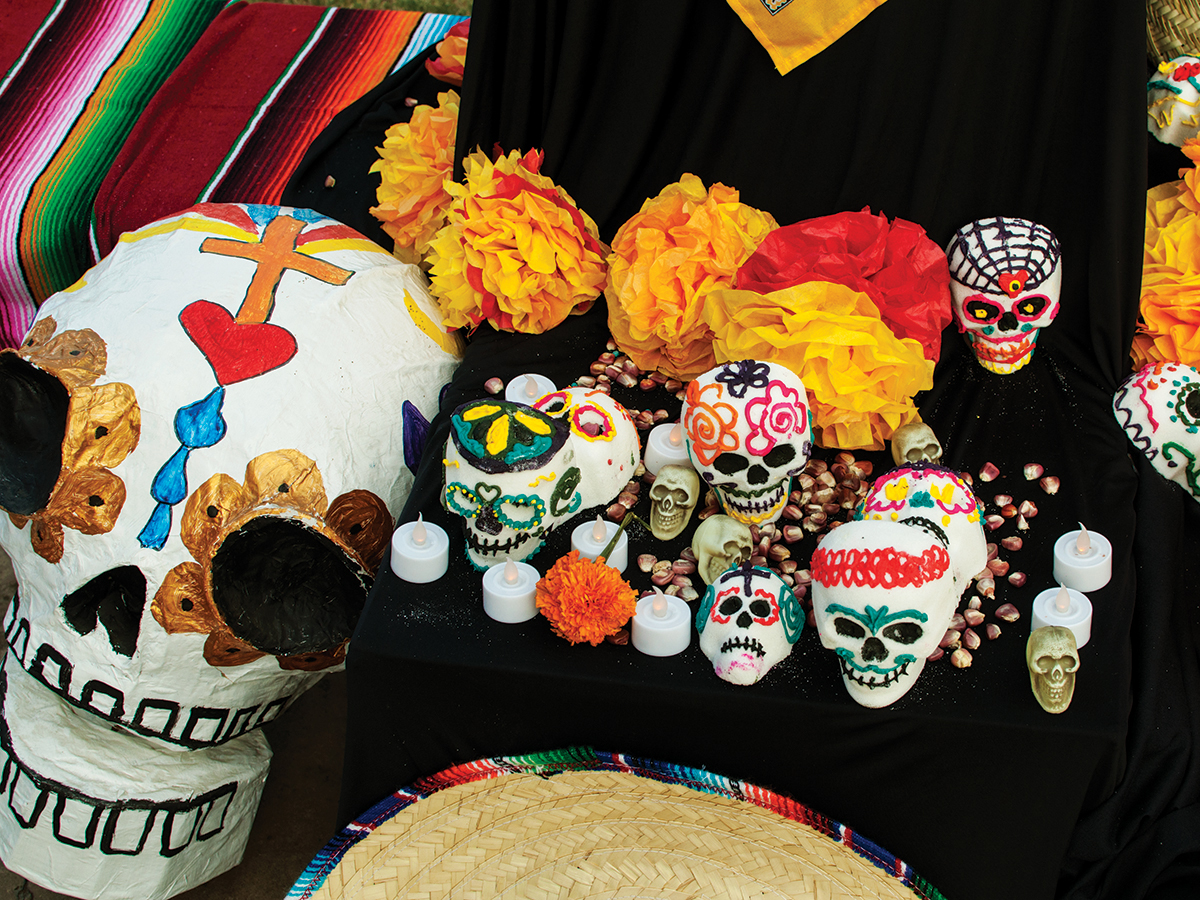 Woodwind sounds of the Conchero dancer’s whistle and the steady, percussive beating of huēhuētl, a cylindrical drum made of wood and swamp cypress, marked the commencement of the Day of the Dead procession. Native American Student Program director Joshua Gonzales began with a blessing, offering song and then prayer to begin the ceremony. Martin Tellez led the trio of Aztec dancers adorned in feathered headdresses and regalia, distinguishing features of Aztec royalty. After circling the Bell Tower to bless the memoriam altars created by various student organizations, a crowd of onlookers gathered with curiosity to see what the Concheros would do next.

Nov. 2 marks the annual observation of Dia de los Muertos, a custom passed from generation to generation of people descended from present day Mexico, Central America and regions along coastal California. There are many practices that vary based on culture and country of origin, but the sole purpose is to recognize the passing of loved ones. Lore holds that the spirit of family and friends who have died return to visit those who maintain practices to remember them.

Traditional Indigenous arts have been kept alive through time and celebrate spirituality in what is known as elementos naturales: fire, wind and de tierra, the earth. The sun, believed to be the creator of all life in Mexica religion, is represented by smoke from the burning of aromatic tree resin, copal. Its sweet scent engulfed the UCR quad as Tellez blew the conch shell trumpet to begin the first dance.

There is great attention to the intentional foot movements. The entire body shifts as the half-noted drum and handheld instruments create a rattle effect and capture the spirit of unwavering rhythm. Dance is a core element of the Conchero tradition. Movements that make up this performance are highly symbolic of the aforementioned natural elements. The beat of the drum calls forth the spirit of the fallen, both past and present.

“In Tlanextli Tlacopan” came to a climax with an Aztec fire dance. Lupe Tellez, co-director of the group, lifted an altar, set aflame, to the sky to begin the final ceremonial dance. The altar is set on the ground while each dancer has an opportunity to spin and twirl about the fire. One dancer approaches the flame with a cool confidence and places his bare foot directly on the open heat. His rattle shakes as he turns on one foot. Martin Tellez kneels before the altar, placing a turquoise ball into the fire and tossing the ignited object between his hands.

To be alive is to navigate the world without fear. This tradition, presumably quite painful or intimidating to attempt, is exemplary for embracing the elements that make up our Earth rather than to allow ourselves to be consumed by fear. In spirit, as steady as the beating drum, the people who predecess us ever remain by our side.

Each tradition and act of celebration displayed pre date the Columbian settlements during Spanish colonization. Efforts to eradicate the instrumentation and practices developed by Mexica people were futile as Indigenous people continue to uphold the customs passed down to them.

Following the Concheros’ performance, spectators found themselves in the heart of la cultura, as co-sponsored by Chicano Student Programs. Lowrider vehicles were parked on display, embellished with decorative skulls. Vendors selling hand woven throws, jewelry and calaveros — the iconic sugar skull most closely associated with Dia de los Muertos — had students lined up along the row of tents.

Finally, the Inland Empire local Afro-Latin group Quitapenas took the stage to close out the Day of the Dead festivities. Their blend of post industrial instruments like the drum machine, electric bass and guitar with staple instrumentation in the Latin musical tradition, namely maracas and cowbell, create an innovative blend with calls to familiar music. The Quitapenas sound is reminiscent of Chicano Batman and other titles that occupy the Latin indie-rock scene.

In the age of mass consumerism and late-stage capitalism, it is necessary to give a platform to Indigenous traditions that continue to honor the deceased on Dia de los Muertos. The art and visual expression of, but not limited to, Aztec, Maya and Mexica identifying-people extends far beyond aesthetics. “In Tlanextli Tlacopan” and the danzas, dances, presented this week are not merely performances for entertainment purposes. Every item, every movement and each detail is carefully thought out and acted out with immense intention. They are a sacred form of art the community at UCR had the immense privilege to be a part of, if only as bystanders. It has been said that these practices are the way each of us ought to be remembered by. These songs and traditions will be practiced by the family we eventually will leave behind.

Life, as well as death, can be painful. Grief is not a linear process. We may find ourselves unable to remember the slightest details about the people we lost, and then in an instant some specific memory may come flooding back like it was only yesterday. Celebration, song and dance: these are the reminders that there is very little that is guaranteed in life. All we can do is dance and sing to the spirits and know that they are dancing and singing back to us too.