Folks, it’s Oscars season and we all know what that means. That’s right, “La La Land” unsurprisingly will outperform everything both foreign and domestic because the Academy loves itself some masturbatory congratulations. But aside from that, it exposes many people to the greatness that is foreign cinema.

“The Salesman” is Iran’s entry for Best Foreign Film at this year’s Academy Awards. Directed by Asghar Farhadi — who will not be able to attend the event due to President Trump’s immigration ban, and whose film, “A Separation” won the aforementioned award in 2011 — the film follows an Iranian couple who, upon moving into a new house formerly occupied by a “promiscuous” woman, encounter hardships. As the title suggests, there is a connection to Arthur Miller’s classic, “Death of a Salesman” in the form of an adaptation in which the two main characters have a large part.

There is a revenge story in here somewhere, but it’s nothing like the visceral tale of revenge in Paul Verhoeven’s, “Elle.” In fact, the film draws several comparisons to other films including Yuri Bykov’s, “The Fool” and Michael Haneke’s, “Cache,” while retaining a distinct and, overall, memorable plot, more restrained than these distant relatives. In any case, the inciting incident is still woefully cliche — Rana (Taraneh Alidoosti) is assaulted by an unknown assailant after accidentally opening the door under the assumption that it was her partner, Emad (Shahab Hosseini). How they got to that new, sketchy house was a result of their previous building nearing collapse following neighboring construction work — a narrative feature which cheekily toys with the audience’s expectations at some points later in the plot.

“Maybe it’s a former client of the previous tenant,” posits Babak (Babak Karimi), a friend of Emad and Rana and a cast member in their theater troupe’s rendition of “Death of a Salesman.” From there, Emad sets his mind on catching his partner’s assailant; never mind that Rana is dealing with extreme trauma and needs comfort, Emad is a man and has to do his manly best to do what he thinks is right. This miscommunication sits at the heart of “The Salesman”: This sense of inadequacy in his ability to protect her guides his path of vengeance punctuated by an incredible slow burn of a climax.

The ethics of revenge and how masculinity comes into play when dealing with trauma are interesting talking points the film heavily revolves around, but the decision to have the characters be actors in a “Death of a Salesman” production was an odd one. The theatrics of expression both on and off stage (wonderfully juxtaposed between scenes) certainly layer the critique of masculinity this film appears to be a vehicle for and the two works share a fair degree of parallels, but had Miller’s play been replaced with anything else little more than the parallels would disappear. The film also has a way of subverting expectations in a way that almost betrays keen viewers who pick up on environmental cues or literary parallels — again, odd, begging the question if Farhadi is a masterful conniver or if he didn’t believe certain elements needed reinforcement. What is for certain is that Farhadi is masterful in his direction over the stars in every scene: Each measured conversation pushing the subdued revenge plot that much closer, fleshing out Emad and Rana’s disparate relationship further and further.

As a whole, “The Salesman” succeeds in delivering a subdued thriller for fans of heady drama. Farhadi paces the film’s 2-hour runtime exceptionally well, serving thought-provoking drama full of emotion and impact. 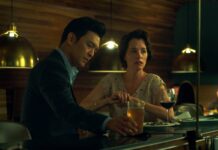 In Retrospect: ‘Columbus’ reflects upon Kogonada’s delicate ode to architecture and those who long for more