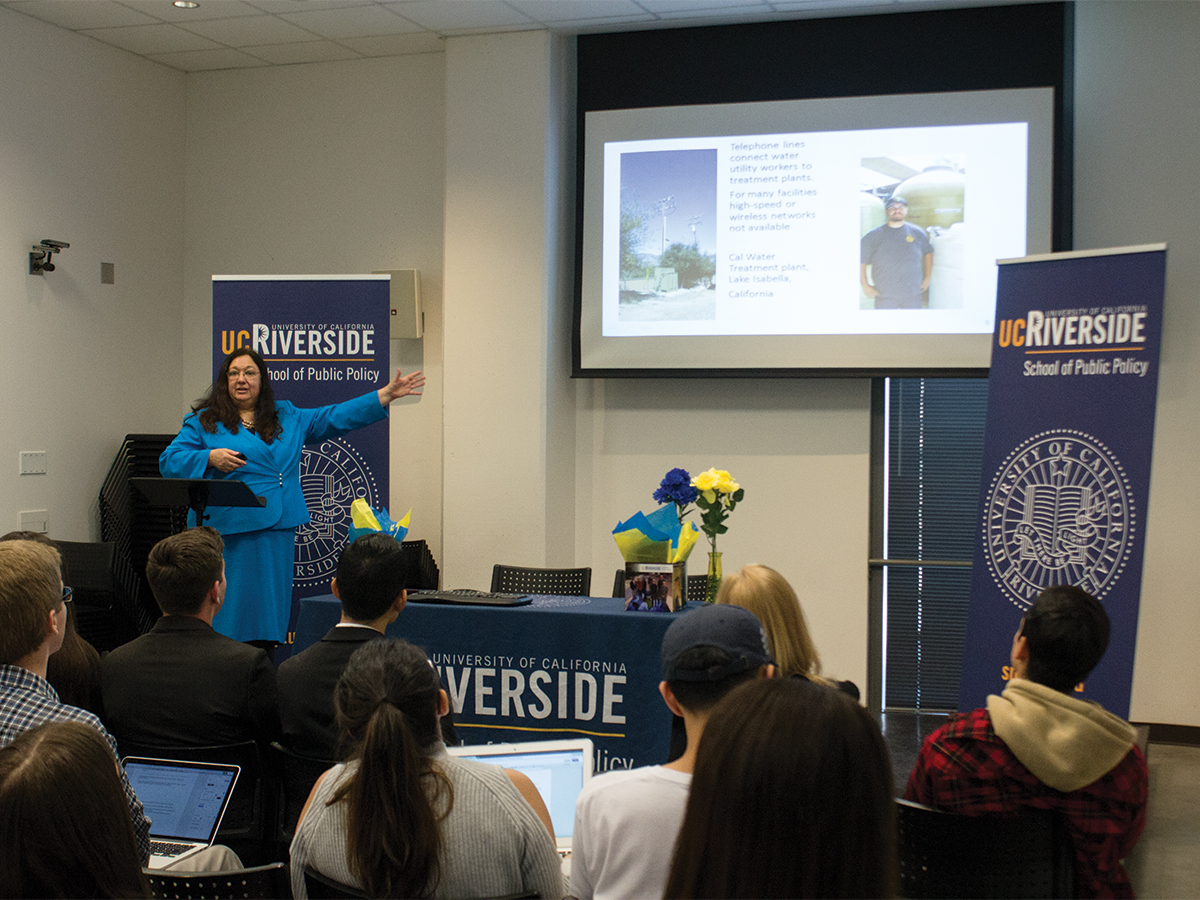 The School of Public Policy (SPP) hosted former Commissioner of the California Public Utilities Commission Catherine J.K. Sandoval for a seminar titled, “Broadband Internet for Managing Water, Energy and Community Needs” on Thursday, March 2 at 12:30 p.m. in INTS 1109. Sandoval discussed her research in “communications and energy access gaps in California, and the central role of communications technology and policy to the management of energy and water resources.” The seminar concluded with a short statement from a representative from the Morongo reservation, followed by a Q-and-A.

To begin, Sandoval discussed how broadband internet is used to communicate vital information. This is important because the use of broadband internet enables the state to monitor operations and maintenance, as well as achieve major policy goals like conservation. Sandoval stated, “Access to communications infrastructure and services are predicates to achieving these synergies.”

In terms of communications, Sandoval discussed how, while it may seem that there is broadband access everywhere, there are actually many areas that are underserved and still use services like dial-up internet. Speaking locally, Sandoval explained how both the Soboba and Morongo reservations, which are in Riverside, utilize dial-up internet for their communications in residential areas. She added that California’s rural and tribal lands are the most underserved and have little to no energy access, often causing schools on reservations to use diesel generators. This motivated her as a commissioner to work with various tribes across the state to bring energy to their reservations and research the environmental impact of diesel generators. While discussing the harmful effects her team found, she said, “It is just heartbreakingly terrible (…) no children should have to live like that, let alone children in California.”

After explaining the use of communications for daily operations, Sandoval further elucidated on how communications prevents disaster and why it is important to provide broadband access to all communities. She cited the flood in San Jose on Feb. 22, 2017, in which the Anderson Dam overflowed, despite system warnings. Sandoval criticized the local officials for being “wed to their model — which is only intended to predict how something may behave — so much so that they were willing to ignore real time data.” The evacuation of 40,000 residents followed after several days of heavy rain and the release of water from the Anderson Dam due to overflow.

Sandoval also argued that gaps in communication make it difficult to evacuate communities. Undocumented individuals who live in low income areas sometimes do not evacuate for fear of deportation. She cited the arrest by Immigrations and Customs Enforcement of two undocumented men leaving a hypothermia shelter in Virginia. She also said low income families are at a disadvantage since they may not be able to afford broadband services or understand English and therefore may not know where to go in the case of an emergency. Her hope is to find a solution for these individuals, such as emergency sirens.

She then explained why the state depends mostly on telephone lines versus wireless internet and satellite. She argued that satellite is too costly, has data caps and is not the most reliable since interference is often caused by simple factors such as rain. Concerning wireless internet, she said it is not feasible since wireless still requires a wired connection to public switched telephone networks and internet backhaul. While present in much of California, the internet backhaul is not as prevalent as the state requires and presents difficulty with reception due to line of sight interference.

In closing, Sandoval who currently works as an associate professor at the Santa Clara University School of Law, invited a representative from the Morongo Reservation to speak. The representative explained how the reservation is working to establish internet access so that their students can take online classes and not have to be driven off the reservation for schooling.

The next seminar of the series will be co-hosted by the SPP and the Center for California Studies and is titled, “Bipartisan Leadership in California” and will feature Anthony Rendon, California assembly speaker, and Assembly Republican Leader Chad Mayes of California. The event will take place from 5:30 p.m. to 7 p.m. at the UCR Alumni & Visitors Center on March 14. Attendees are encouraged to RSVP at http://spp.ucr.edu/events/.