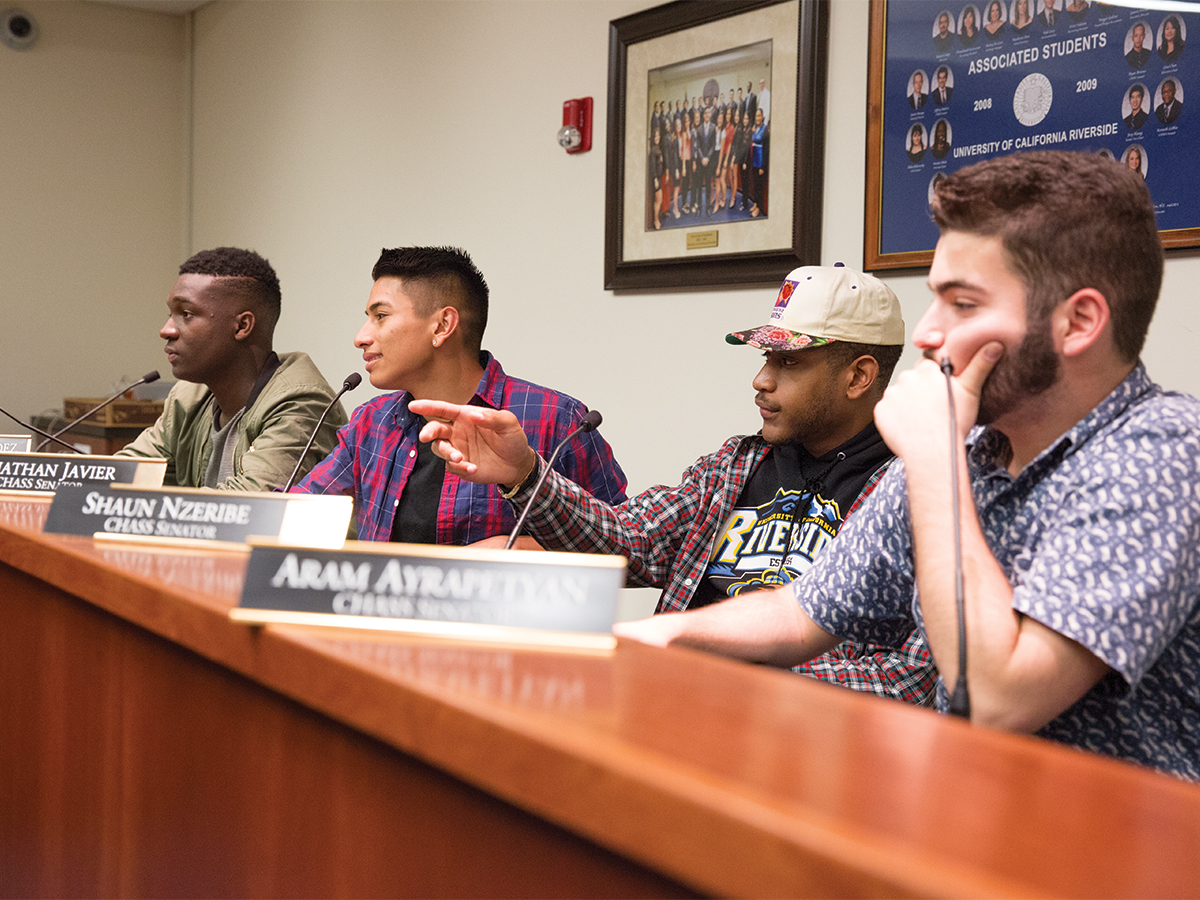 The second-to-last senate meeting of winter quarter commenced at 6:16 p.m. on Wednesday, March 1.

During the Green Campus Action Plan’s (GCAP) report, Undergraduate Sustainability Director Bryan Martinez announced the addition of five new solar umbrellas on the HUB’s terrace. The umbrellas — instead of solar tables which were too expensive at $10,000 per table — will arrive between March 27 and 28, 2017 at a cost of $14,390. The allocation of the funding passed 10-0-1. Later on, HUB Director Brendan O’Brien announced the installation of an additional five solar tables.

Wednesday, March 8 will be ASUCR’s third and final State of the Association meeting of winter quarter, scheduled for 6:10 p.m. in the senate chambers on the second floor of the HUB.

On Thursday, March 3, around 11:15 a.m., the UC Riverside chapter of California Public Interest Research Group (CalPIRG) staged a human oil spill at the Bell Tower to “bring attention to the negative health affects (sic) of fracking and oil spills on human health,” according to their press release.

Twenty-five students clad in black, laid mostly face-up on the lawn in front of the Bell Tower displaying signs saying “ban fracking California” and “out of the 750 known fracking chemicals, 29 are linked to cancer.”

The demonstration was part of an effort which has spanned the entire quarter to motivate California Gov. Jerry Brown to ban fracking in California. Fracking, formally referred to as hydraulic fracturing, is the process of injecting liquids, usually consisting of water, proppants and chemicals into wellbores at high pressure to force open cracks in the earth’s rock formations and extract oil and gas. Due to its potentially harmful environmental impacts, hydraulic fracturing has been the center of controversy in most developed nations, including the European Union and the United States, leading to moratoriums in New York and Maryland, as well as outright bans in Ireland, the Netherlands, Scotland and France.

As part of their effort, UCR’s CalPIRG chapter has collected more than 800 signatures on campus for their petition asking Brown to ban fracking in California.

First-year environmental science major and CalPIRG member Alex Miller described the protest as successful. “We hoped to, and were successfully able to, draw greater attention to the issue, and illustrate one of many of the awful things it (fracking) furthers in the environment,” stated Miller, who went on to say, “We were able to educate the people around campus, and therefore promote democracy.”