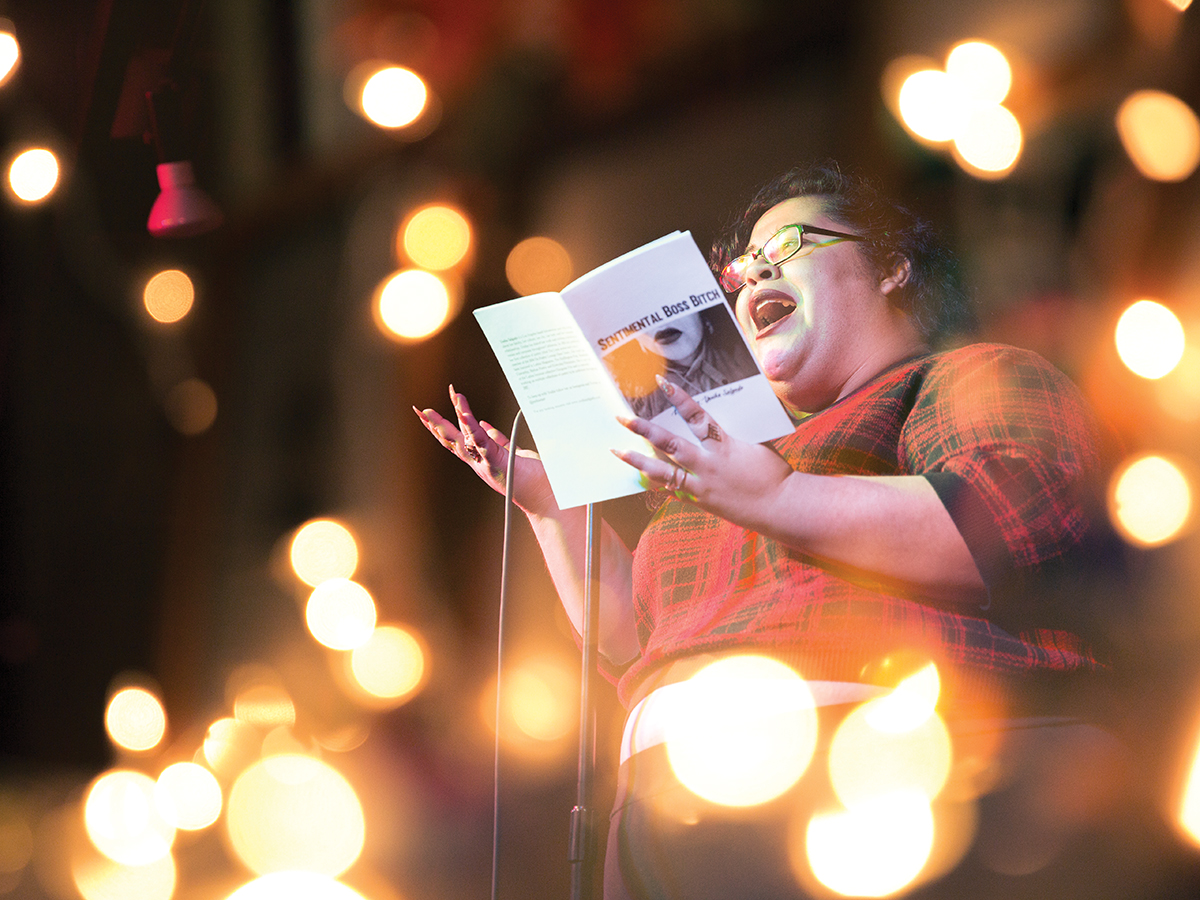 At 5 p.m. on Monday, Feb. 27, doors opened to HUB 355 as students grabbed a Mujer journal and a pin before filling in the seats for the opening event of Semana de La Mujer (or, “Weekend of the Women”). Before the event began, Arlene Cano, social and cultural programmer for Chicano Student Programs, described what Semana de La Mujer is.

“Semana de La Mujer is a weeklong series that highlights and recognizes, commemorates and celebrates the contributions of Chicanas and Latinas to the larger Women’s History Month program,” opened Cano. “I want us to take a moment to thank our (ancestors) because our theme this year is ‘The strength of our past runs in the blood of liberated women,’ which means that we all have the potential inside of (our hearts) to be a liberated woman.”

The event began with a presentation by Estefania Garcia Bautista, a fourth-year theater major,  about Queendom. Queendom is a genderless term about “taking ownership of who and what you are,” stated Bautista, who then provided examples of other figures who she felt embodied Queendom: Ana Tijuoux, Rebecca Lane and Hijas del Punk.

Edith “Chata” Macias, a fourth-year ethnic studies major, began the first performance with “El Milagro,” which was a short story about how her mother was her miracle  during the time when her family was homeless, as well as her introduction to the Virgin of Guadalupe, more commonly known as Our Lady of Guadalupe, through a circle of prayers in a church where Macias’ family received food aid.

… our theme this year is ‘The strength of our past runs in the blood of liberated women,’ which means that we all have the potential inside of (our hearts) to be a liberated woman.

Victoria Rios, a mathematics major, presented a poem about her memories making tortillas and tamales with her family during her childhood. She then performed a monologue in Spanish from an anthology about the many adjectives of women.

Bautista continued the performances by presenting two poems: “Immigrant Backpack,” which is featured in the Mujer Journal and is about an immigrant crossing the border to make a better life while remembering all the people that didn’t make it past the border, and “Chingona,” a poem in Spanish that compares the associations behind the words ‘chingon’ (Spanish masculine word for “annoying”) and ‘chingona’ (Spanish feminine word for “annoying”) with specific qualities that highlight the sacrifices women make for their families.

Kat Zoque, a fourth-year ethnic studies and gender and sexuality major, started their performance with a poem entitled “You Learn to Hate,” which was inspired by conversations they held about toxic masculinity and the hate that is also spread by some cisgender women. Their second poem, “You Can’t Buy Freedom,” stemmed from Zoque pondering about freedom itself.

Afterward, Bautista ended the event by hosting a quick writing workshop where the audience wrote a poem about what being a ‘mujer’ (or woman) meant to them before and after the event, the obstacles that hold women back and what they will do to overcome those obstacles. Bautista then encouraged everyone when they go home to reflect on what they wrote and bring their poems to “Poesia Peligrosa.”

In HUB 355, La Semana de La Mujer Week continued with their second event, Las Profes Panel, on Tuesday, Feb. 28. The panel included Ethnic Studies Professor Jennifer Najera, Professor of Public Policy Cecilia Ayon, Music Professor Xochitl C. Chavez and Media and Cultural Studies Professor Amalia Cabezas. They each shared their journey to becoming a professor and the obstacles they faced along the way simply because they are women of color. Not only was this panel informational, but it also showed young Chicana and Latina women, and all those in attendance, that they are able to reach their dream career regardless of background and upbringing.

Marlen Rios-Hernandez, a Ph.D candidate in ethnic studies, and Crystalbell Miranda, a third-year transfer Latin American studies and law and society major, opened the event. They expressed honor in celebrating these four women who have “prevailed in their academic career,” remarked Rios-Hernandez, and who have paved the way for other young women to follow.

Although their stories differed in place of study and how they grew up, they all shared the common theme of struggle and the importance of having a strong support system. Najera shared that she almost quit graduate school on several occasions because of the level of difficulty. Her family told her to hold out until the end of the semester, and she ended up finding other Chicana and Latina women who were going through the same difficulties. “We supported each other intellectually and emotionally,” Najera remarked.

Although their stories differed in place of study and how they grew up, they all shared the common theme of struggle and the importance of having a strong support system.

The event transitioned to a Q-and-A session during which students in the audience asked about graduate school. “Network. Get to know your professors,” Cabezas commented. Ayon added, “Expose yourself to different disciplines,” and Chavez stressed the importance of keeping your mental health in check throughout the entire process.

Las Profas Panel articulated that the path to success is not an easy one and that it is also different for every individual. The event showed why representation is so important, and now young Chicana and Latina women have physical proof that they are able to reach whatever goal they set up for themselves and maybe one day will find themselves on the other side of the panel.

On Wednesday, March 1 at 6 p.m., a dialogue circle was held in HUB 379. Open only to those who identified as women, the dialogue centered around the hardships and personal struggles experienced by current women attending UCR and their relatives. The dialogue was facilitated by Emilia Ortega-Jara from Corazon Counseling Services, an off-campus resource. Ortega-Jara was encouraging and supportive of the different experiences from the women. Even though crying may be embarrassing for some people, Ortega-Jara promoted the expression of emotions among the attendants as she expressed, “Don’t apologize for your emotions.”

On Thursday evening (March 2) in The Barn, UCR’s Chicano Student Programs, along with aid from Teatro Quinto Sol, hosted the Poesia Peligrosa. This quarterly sponsored event highlights the elegance and inherent beauty that comes along with being a mujer citizen.

The Barn boasted a wonderful energy, as people socialized while checking out the unique vendors before the festivities began. Along the outermost perimeters of The Barn were vendors selling beauty and skin products such as organic soaps, lip balms and student-curated magazines filled with poetry. Adorning the walls were majestic Spanish paintings, many featuring breathtaking water color that enriched the nighttime environment. Once the event began, everyone sat down in anticipation for the special guest, Yesika Salgado, to take center stage. Salgado is an LA-based Salvadoran poet and has been published in various outlets such as Buzzfeed and Huffington Post.

Before introducing Salgado, one of the key coordinators, Estefania Garcia Bautista, fifth-year theater major, reinforced the fact that the room was a safe space for anyone willing to share. Bautista also stated that the Poesia Peligrosa was “created for artists, immigrants and dreamers to share how you feel. We do not judge. Our objective is to love and unite.”

After the introduction, Salgado was welcomed on stage with raucous cheers from the enthusiastic crowd. Salgado immediately enticed the crowd by displaying her sarcastic and potty-mouthed candor. After rushing through LA traffic she remarked that she wanted to hear the crowd resonate with her on every level, so if anyone felt a certain way during her readings, they were more than welcome to express themselves. Salgado began reading from her third collection of poems titled, “Sentimental Boss Bitch.” The anthology was a tribute to her vigor as a plus-sized woman with a passion for romance. During one of her poems she proclaimed that she “was the type of freedom that terrifies folks.”

“(Poesia Peligrosa was) … created for artists, immigrants and dreamers to share how you feel. We do not judge. Our objective is to love and unite.”

Salgado read through more poems, many about her eclectic encounters with significant others, while others recounted powerful family memories. She spoke with a passion that can’t be practiced. Several times throughout her readings, Salgado would interject to make sure everyone was actively listening. To end on a uplifting note, she thanked the crowd for being positively receptive to her story. “Keep writing, keep expressing yourselves. The world needs more voices. Every time we come together to share each other’s voices, we’re resisting,” Salgado revealed before she made her way to the back of The Barn to sign copies of her work.

The last portion of the event was an open mic available to any poets who wanted to share their stories as well. Many people took the stage, some belting out chants of freedom, while others read off poignant poems in Spanish. Salgado’s bravado undoubtedly left a mark on every budding poet who followed her.

The Poesia Peligrosa was a very enlightening event. It showcased the beautiful struggles of a culture that hasn’t always been given their chance to shine. But on that night, everyone’s light shined brilliantly.