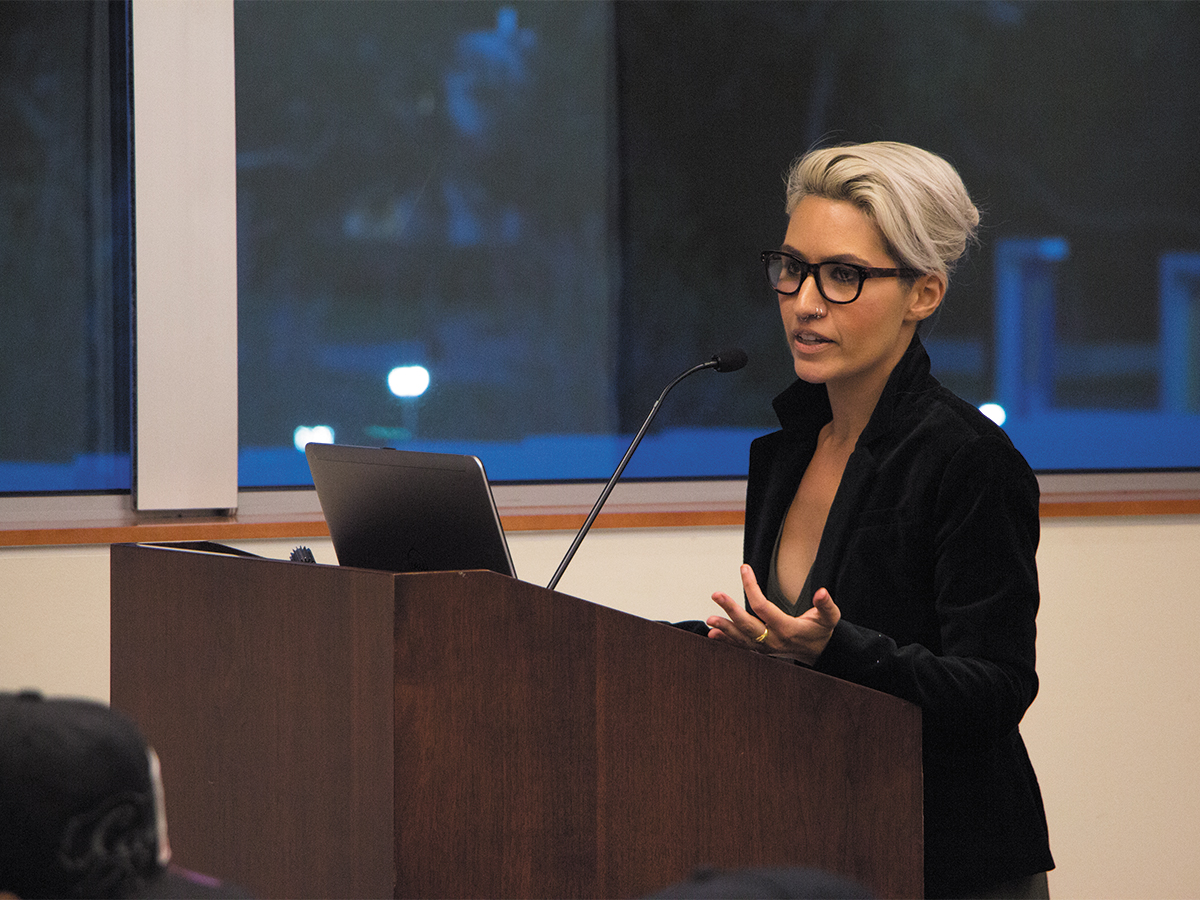 On Tuesday, March 7 at HUB 355, UCR’s Women’s Resource Center, LGBT Resource Center and Middle Eastern Student Center hosted acclaimed writer and sexuality educator Wazina Zondon to speak at UCR regarding her experience dealing with homophobia in the context of being raised as a Muslim.

Zondon chronicled her life from adolescence to adulthood. She started her testimony by informing the audience that the current political climate left her in a vulnerable state, leaving her with a myriad of emotions. Because of this uncertain time, she began to reflect on her life, finally deciding that sharing her story could incite a fire in someone else to help others in similar situations. She transported the audience back to two decades ago by unearthing how her childhood has forged the woman she is today.

During her teen years, Zondon mostly hung out with male friends and chose to sport more casual wear instead of dressing up with floral print dresses and skirts. In ninth grade, Zondon finally realized she was gay after someone blatantly asked her. She described her coming out experience as “anticlimactic” because it came with no struggle or second guessing compared to other gay individuals who often have to jump through hurdles.

Zondon’s family, who practiced Islam, frowned upon her homosexuality. She remembered having to guide her parents through the reality that she was gay. Zondon felt as though she had crushed her mother’s dream of having a heterosexual daughter with a nice husband and a house with kids. Zondon recalled going to a a Boy George concert at Radio City Music Hall and seeing many people in drag at the show. She admired how they seemed to stand apart valiantly from the rest of the crowd. It was also then when Zondon began to wonder why one marginalized group such as those who practice Islam would have so much trouble accepting another disenfranchised community. For example, her dad would tell stories of Judgement Day in an attempt to use religious rhetoric to scare her out of being gay.

Once she moved out of the house and began to attend State University of New York at New Paltz, she began to experience a new sense of independence. In college, she could embody various personas because college was essentially a blank slate of people from various communities assembled into one campus. She did, however, reveal that it became tiresome because everyone seemed to have a different expectation depending on who she was with. Her “brown” friends saw her in one light, while her queer friends saw her through another lens. In a period of social upheaval following September 11, Zondon resolved to be a pillar of strength by speaking out against social injustices that plagued Islamic and Muslim communities after the American tragedy.

As she immersed herself in college, however, she noticed that her kinship with her family was withering. During her stint in college, Zondon would travel home to visit her parents and brother. Because of the demanding nature of post-secondary education, she often felt compelled to go back to a world that felt simpler. They commonly watched family videos from her childhood. As Zondon viewed the videos, she felt as though the child in the clips was a completely different person. “It’s the emptiest feeling in the world when you realize your parents only know one part of you,” Zondon expressed. When she visited home she would style her hair more elegantly instead of her flaunting her pixie cut. Covering her tattoos was also something customary since she felt it was rude to show off her ink to conservative parents.

After college, she collaborated on a project called, “Coming out Muslim: Radical Acts of Love,” a performance series that utilizes storytelling as a medium to discuss sensitive topics like homophobia and coming out. To Zondon, it was a way of letting marginalized people know that they have an ally who can offer support.

It’s the emptiest feeling in the world when you realize your parents only know one part of you.

Now Zondon goes around the country giving lectures, speaking in her podcast (“Follow That Flannel”) and doing shows by which she is constantly advocating love and acceptance. According to her, some days feel like a mountain to triumph over, but she keeps hope alive by reminding herself that she is going against the grain to spread positivity. “Isolation is the tool of the oppressors, so it’s important to rally together and share each other’s ideas,” Zondon asserted. She advised people to breach their comfort zones because it is the only way that we can experience growth.

She concluded her speech by making a bold statement: She declared that Allah made her gay through His will and that she doesn’t question Allah because that would be a disservice to Him, so she would like to think that who she is was purposely intended.

After finishing her presentation, the coordinators opened up the floor for audience questions. One of the questions regarded the difficulty in admitting she was gay and the current status of her relationship with her parents. She remarked that her parents respect her boundaries now since she is adamant about keeping a low profile around them out of respect. She described it as a, “Don’t ask, don’t tell” situation. However, Zondon praised her father for defending her from her uncle who, at one point, was asking invasive questions about her life. In retrospect, she was deeply touched by the leaps and bounds her parents had gone through to accept her lifestyle decisions. “I’m not the one they wanted, but they still invite me home,” Zondon proclaimed with a smile.

Zondon’s final words to the audience were a call to action. She advised everyone to assert their unique nature instead of conceal it because that makes people stand out from the crowd. Zondon’s presence at UCR is testament to the inclusiveness the campus exudes to all communities. Even with the world in political turmoil, it’s refreshing to see brave souls like Zondon share her empowering story to inquisitive minds on colleges campuses.