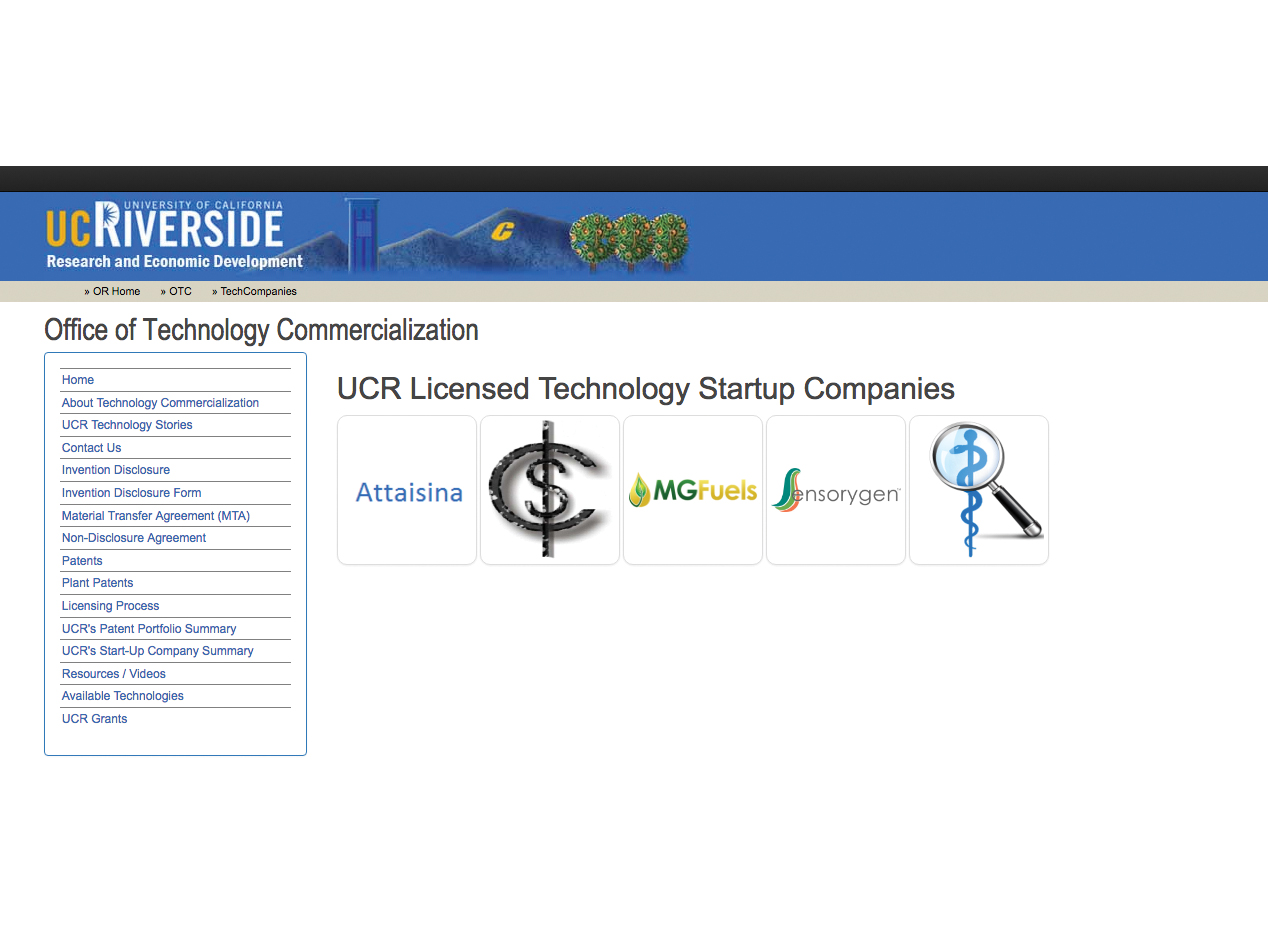 This past fiscal year, UCR has given six commercial licenses to six UCR-affiliated startups.

The startups include FarmSense, a computer algorithm designed by computer science professor Eamonn Keogh to monitor, predict and classify insects. The company is led by another UCR graduate, Shailendra Singh. Another UCR-affiliated startup garnering national attention is Sponge, which uses technology developed by engineering professors and graduate students. Their product is a reusable material designed to help capture oil. The innovation came in second place in Climate Launchpad 2016, one of the biggest clean technology innovation contests in the world.

Another startup company is Agrobiomics, started in 2014 by UCR researcher and extension specialist Philippe Rolshausen. Rolshausen has been studying agriculture, specifically tree crops such as citrus, grapes, almonds and avocados since 2009. He recently patented a commercial sealant called CropSeal. “When you cut yourself, you need to put a band-aid on the cut and if you are worried about infections, you put lotions on it to clean the cut. CropSeal is like that but for grape vines. We make bandages and lotions to put on pruned tree edges. Without CropSeal you expose the vines to infections and other diseases,” said Rolshausen. Rolshausen is currently working on expanding CropSeal to other tree crops as well as a new product called biopesticide.

In addition to these startups, UCR also helped three other startups this fiscal year, including SmartDocFinder, SureHarvest Services and TusPark Ventures GTQY USA. In addition, Director David Suh of the Office of Technology Commercialization is in additional negotiations with four other startups here at UCR. Numerous patents, companies, licenses and startups have come from UCR since its founding. Suh’s office is looking forward to working with various new departments on campus such as the School of Medicine to continue coming up with new commercial products and help UCR leave a lasting mark in all specialties. “UCR’s biggest blockbuster is the Easy Peel Seedless Tango Mandarin Oranges, a variety of oranges often found in big brands such as Halos and Cuties,” said Suh. Since it’s founding in 2005, the Tango oranges have acquired over 40 commercial licenses worldwide.

In addition, the Office of Technology Partnership offers resources for undergraduate students such as guidance on patents, innovation and entrepreneur groups and classes to help students with their own ideas as well as mentors for interested undergraduate entrepreneurs. The office also holds events such as Quickpitch which offer students the chance to pitch their ideas to other entrepreneurs. On April 18, UCR will be launching a makerspace in Orbach library.