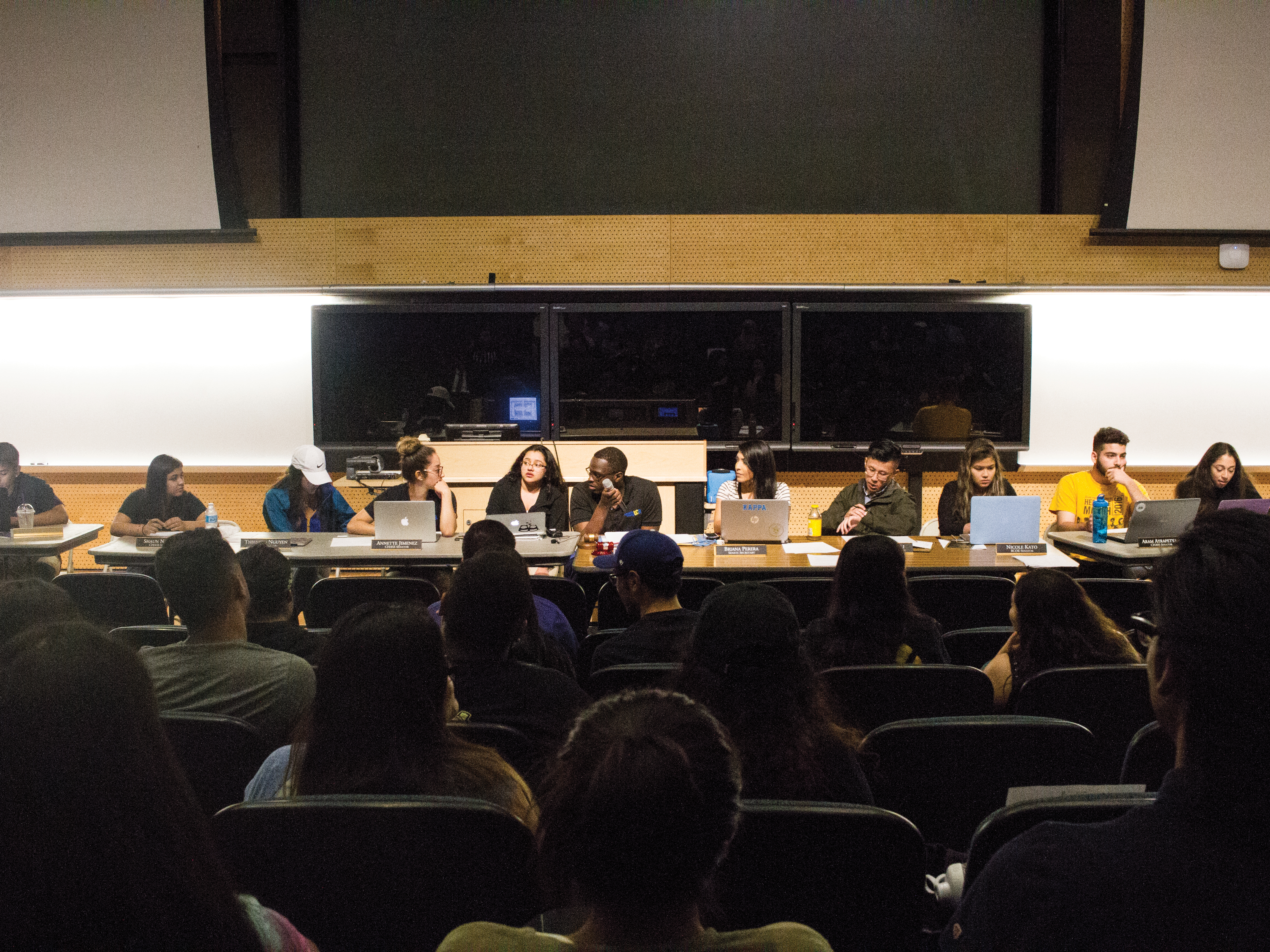 On Wednesday, April 12 at 6:12 p.m., the second senate meeting of spring quarter convened in UNLH, with the room change made to accommodate an anticipated larger-than-usual student turnout.

The meeting began with Chief Justice Jo Gbujama announcing the issuance of preliminary strikes (based on the case of W17-C2, which was a complaint from former Interim President Arturo Gomez), against three ASUCR officials for malfeasance regarding the signing and distribution of noncompete agreements issued in 2014-15 and valid through 2018.

Gbujama stated the number of strikes and the punishment for each senator:

Cortez-Hernandez responded by asking for thorough elaboration on the reasoning behind his four strikes and Gbujama replied that it could be further discussed and addressed at the next judicial meeting on Tuesday or a detailed report would be sent out close to the date. Executive Vice President Wen-Yu Chou then called an executive session at 6:33 p.m. to discuss the validity of the strikes and censures against present senators.

After reconvening at 6:41 p.m., Chou stated, “It would be wise for us to table whatever is on the agenda tonight. The reason as to why is because judicial has issued strikes toward multiple senators sitting here tonight, however, there has been no explanation given. We are not saying that judicial is wrong, but we also don’t know if they are correct as well. Therefore, we want to talk more and discuss more and why this conclusion was reached. There are important things on here tonight, such as impeachment, which require two-thirds of the senate to vote in favor.”

The vote to adjourn, however, was pushed until after public forum had been held. During public forum, several students in the gallery, such as Ruben Rodriguez, Julia Schemmer and Alexander Wilson Jr., spoke about the lack of student representation at senate meetings, criticizing the reason to adjourn and its impact on the upcoming election and disappointment in ASUCR representatives who were involved with the impeachment case.

“I feel like because of the severity of issues such as impeachment, there should be increased importance in terms of reaching out to students because it’s really important that more people are here. We have a lot of space open so we should have a lot more students present to represent the student body. I feel like there is a certain number of students from one fraternity here and they can’t be the only ones representing the student body of 22,000 people,” voiced Wilson. Chou responded by reading an email that was sent out to all organizations regarding time and place of spring quarter senate meetings.

Another student said, “You’re saying that there is a lot of committees and stuff that is going on and that have importance by directly impacting the students, but you have someone on your senate currently who has been talking about backdoor deals within ASUCR and the party that ran and won the candidacy. These issues also affect students too, not just committee meetings.” Chou once again responded by claiming that she herself was not aware of such backdoor deals nor how they could be the cause of the issued censures. The back-and-forth between the gallery and the senate concluded with a 1-5-1 vote against postponing the impeachment hearings.

Chou ended the senate meeting at 7:28 p.m. after a motion to adjourn and continue with the impeachment trials. Gbujama took over as executive and began by calling for the students on trial, ASCUR officers President Shafi Karim, Vice President of External Affairs Oscar Loera and Personnel Director Alan Alcantara. Despite a summons letter sent a week before the senate meeting, none of the officials on trial were present and also failed to notify of their absence 48 hours before the meeting as required. Gbujama decided to proceed because, as the Chief Justice, had the right to do so considering they failed to provide proper evidence. Gomez filed this case against the previously stated ASUCR officers on grounds of a noncompete contract for the 2015-2016 [YOUR]Side slate that threatened financial extortion of $2000 “from any individual who would break it. Not only was this contract not notarized, it is also not legally binding.”

The charges as per Article IV, section J of the ASUCR Constitution state that, “Any member of the Executive Cabinet may be removed from office for malfeasance or dereliction of duty.” Gomez, the petitioner of the case, opened with his complaint and went on to describe the various evidence provided: [YOUR]Side’s noncompete agreement form, written testimony of a former [YOUR]Side party member, screenshots of Facebook group messages showcasing Karim’s involvement with the contract, and Google Drive evidence relating to budget options as well as violations of elections code.

“Regardless of the personal relations with these individuals, it is quite clear this will not be an easy vote. In fact this vote will define the tone of ASUCR relationships with its constituents for years to come,” concluded Gomez in his closing statement. Gbujama then closed the floor and the senators exited for deliberation at 8:23 p.m.

The next ASUCR meeting will be held at 6 p.m. on Wednesday, April 19 in the senate chambers.