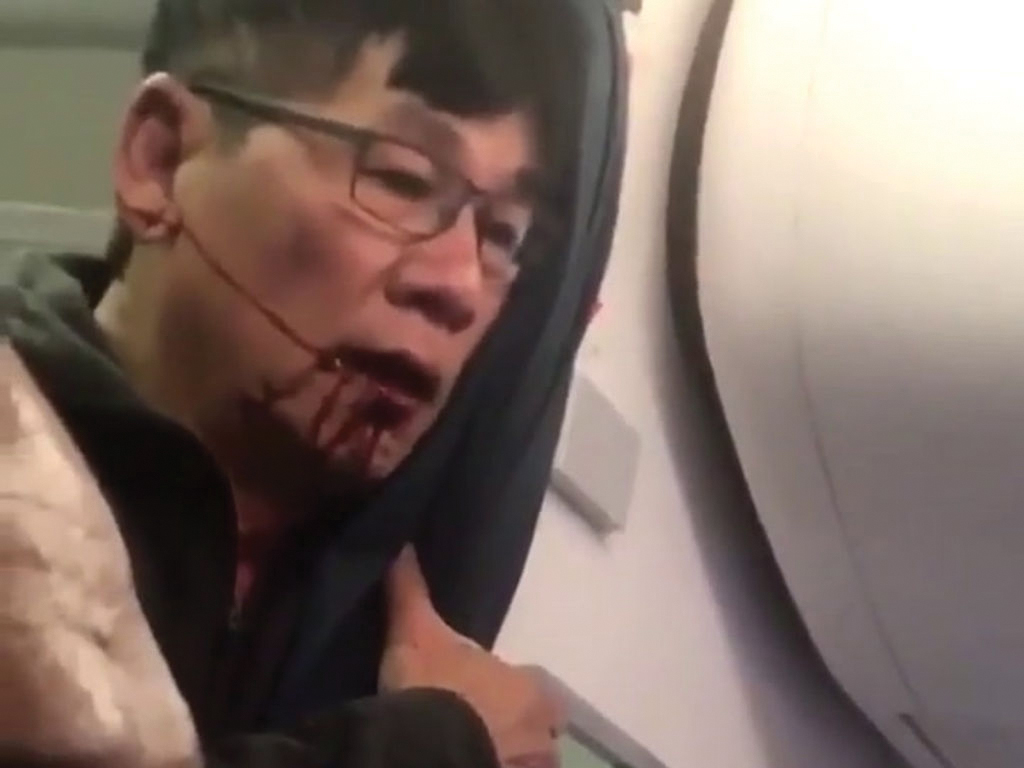 On Sunday, April 9, an Asian doctor refused to leave an overbooked United Airlines flight from Chicago to Louisville because he had to see his patients the next day. He was brutalized by policemen at the request of the airline and viral videos of the engagement show him being slammed against an armrest, then being dragged off the plane, immobile. Another video shows him back on board, but standing at the back of the plane repeating the phrase, “Just kill me” while blood streamed out of his mouth. The passenger suffered a broken nose, a concussion and the loss of two teeth.

The Louisville’s Courier-Journal released the victim’s information: His name is David Dao; he is a doctor who practices in Louisville. The journal also publicized Dao’s criminal history: He was convicted of drug-related offenses in 2004, had his medical license revoked in 2005 and was only allowed to return to practice in 2015. This was of course completely irrelevant for United Airlines; his past trouble with the law does not justify the airline’s claim that he was a problem, and his past was not at play during the event. It is hard not to see a parallel of this event with prior instances of leaked criminal records of black victims of police violence. This curbing of narratives has become something of a norm. The press congratulates itself on being evenhanded but instead the authority is exonerated in the public eye while the guilt is shifted onto the victim.

A broader interpretation of the trend in police brutality and media misrepresentation is an effort by the dominating population to maintain white innocence. Dao can be considered  a member of the “model minority” stereotype, a person of color with a noble profession committed to helping people. But a member of a model minority is only exemplified insofar as it is compliant to white norms; should there be no compliance, it instantly reverts to its original state of lawbreaking.

The term “model minority” was coined in 1966 by white sociologist William Petersen, to deploy a rhetorical attack against “problem minorities” who don’t conform to the way of life of white, middle-class people. The Asian-American population falls into this stereotype because they overperform in some sectors of standardized tests and are overrepresented in skilled professions. This perception of Asians is anything but flattering. Since the mid-19th century when Asians first immigrated to the United States in large numbers, they were perceived as savages; the mere human who could never assimilate into white culture. Asians were highlighted in gang wars, illegal drug dealings and prostitution. Perhaps worst of all, they engaged in competition with American workers for jobs. Over time, even when Asian-Americans gained entry to skilled professions, discrimination and competition persisted; if Asians are now seen as civilized, they still remain a threat to the other, and thus they’re met with visceral hostility.

According to this prevailed perception in America for most of its history, Dao is stealing resources that belong to those more deserving; any measure to eject him, no matter how violent, is justified. The narrative most often applied to Hispanic immigrants, black Americans and Muslim refugees can easily be applied to him as well. None of this implies that all nonwhite minorities are treated equally poorly by the state. Rather, the social power that permits one to safely refuse the commands of the state will never be extended to anyone who is not clearly middle-class as well as white. There is a lesser chance that Dao would be met with violence if he was a white physician.

The United Airlines confrontation is not an isolated case but a part of a growing pattern. As anyone who has been paying attention to current politics, one can assume that things will not be easier for Asian-Americans. President Trump’s rhetoric attest the language that revise Yellow Peril: The Chinese are “raping our economy” and “stealing our jobs.” Alongside that, our president narrates that Hispanics are breaking down American borders and Muslims are assaulting American liberties. The still foundational anti-black hatred is now being complemented by an increased hatred of other nonwhite populations.

The logic goes that if America is no longer great and America is never to blame, then “the others” must be responsible. Whether rich, middle-class or poor, the Asian-American population could become an inviting target for nativists as scapegoats.