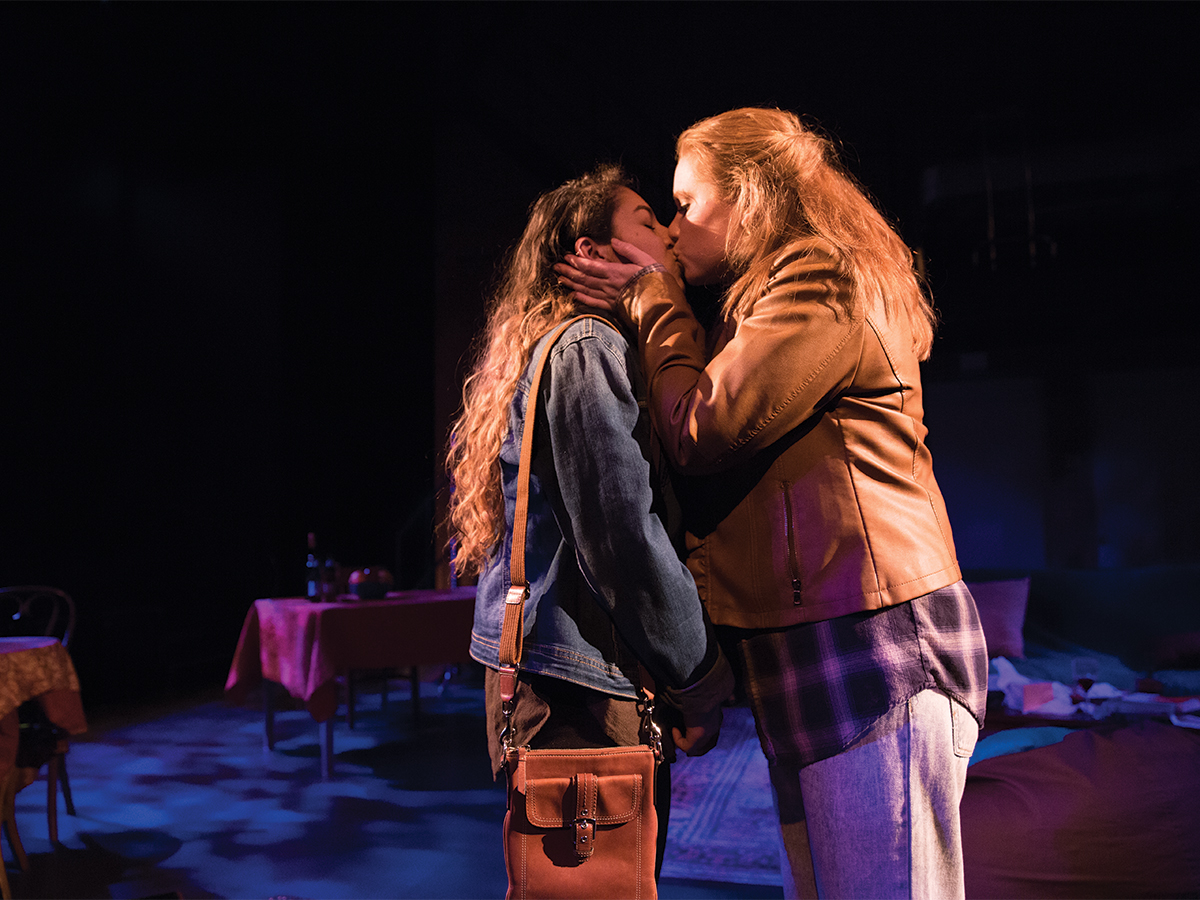 “Stop Kiss” is a play written by Diana Son in 1998 — the year it also takes place in — and tells the story of two women, Callie and Sara, who slowly develop romantic feelings for each other before a heinous hate crime interrupts their friendship-turned-love. UC Riverside’s Department of Theatre, Film and Digital Production’s rendition of the drama was directed by Bella Merlin and starred Dana Peirce as Callie and Gloria Olivas as Sara.

Like all shows in ARTS 113, “Stop Kiss” was presented to a modest crowd, the smallest stage many have seen a performance in short of someone’s own house. Needless to say, the atmosphere was warm, cozy, an inviting air that made the performer-audience dynamic more interactive and streamlined. The two hour-long production began with the sound of music being played over the speakers, iconic Europop quartet ABBA’s “Dancing Queen” singing to the 30-something-year-old traffic reporter Callie of her golden teenage years. Great song, quite a bummer though. Sara’s just moved to New York from St. Louis, and as a friend of a friend of someone she used to know, Callie promised to take care of the out-of-towner’s pet cat. Sweet.

There’s a powerful degree of nonverbal communication at play in the two protagonist’s interactions whenever the story places them together in Callie’s apartment. Peirce and Olivas convincingly go through the motions of two women whose feelings of sexual identity are perplexed, not by choice but by necessity. As if falling in love with someone you just met isn’t wild enough, the external forces — the ex-boyfriends, the family, the work, the uncertainty — all exacerbate the difficulty of this situation. Merlin’s direction never framed the two in any contrived movie moment wherein their deeply hidden love is revealed, rather she directs her leads more subtly and respects the audience enough to be the judges of their interactions.

But “Stop Kiss” is more than just a love story. Son’s play is one about the egregious yet wholly, if not surprisingly, tangible forces at work that often extinguish loves like that between Callie and Sara. It never explicitly displays it, but a crucial incidence that drives the other half of “Stop Kiss” is a hate crime committed against one of the characters in the story. The hate crime is investigated, abysmally, by one Detective Cole, whose victim-blaming vexation stings almost as bad as the crime itself. I’m not one to spoil, so suffice to say that the play’s tonal shifts are melancholic and deeply troubling when it jumps from scenes prior to and following the incident.

But with the temporal shifts comes an obnoxious storytelling device that permeates the production. It’s a minor one, and maybe permeation is over-emphasizing its role, however the sound effect that accompanies every scene transition is “Stop Kiss’” one major fault. Where the rest of the production respects its audience to engage with and fully engross themselves into the play to extrapolate key bits of information, these sound bits, less than five seconds in length, are the equivalent to hand-holding storytelling. The stinger is literally nothing more than what sounds like a stock sound effect of a woman screaming punctuated by the breaking of glass — a scream that doesn’t fit the context of the crime and glass that wasn’t present either. The counterargument that I would expect posits the significance of the scream as a symbolic tool that disrupts the audience to relive the horror of the event. Or something. It’s really a minor thing, but not a complaint I am alone in having judging from the post-show conversations I eavesdropped.

“Stop Kiss” really is more than the sum of its parts. I’m a movie guy, and I understand there exists a sizeable gap to bridge when going from film to the stage. Merlin’s direction and the two lead’s solid performances warrant viewing for the visible hard work and energy allotted to make Son’s play — in all its starkly conflicting tonal shifts that require attention to detail as to avoid failure — work so laudably.

“Stop Kiss” will be running its final productions this week from Thursday, May 11 to Saturday, May 13 from 8-10 p.m. inside ARTS 113 with a 2:30 p.m. matinee showing on Saturday. Tickets are free to current UCR students and can be picked up from the University Theatre Fine Arts Ticket Office from Monday to Friday, 10 a.m.-3 p.m.