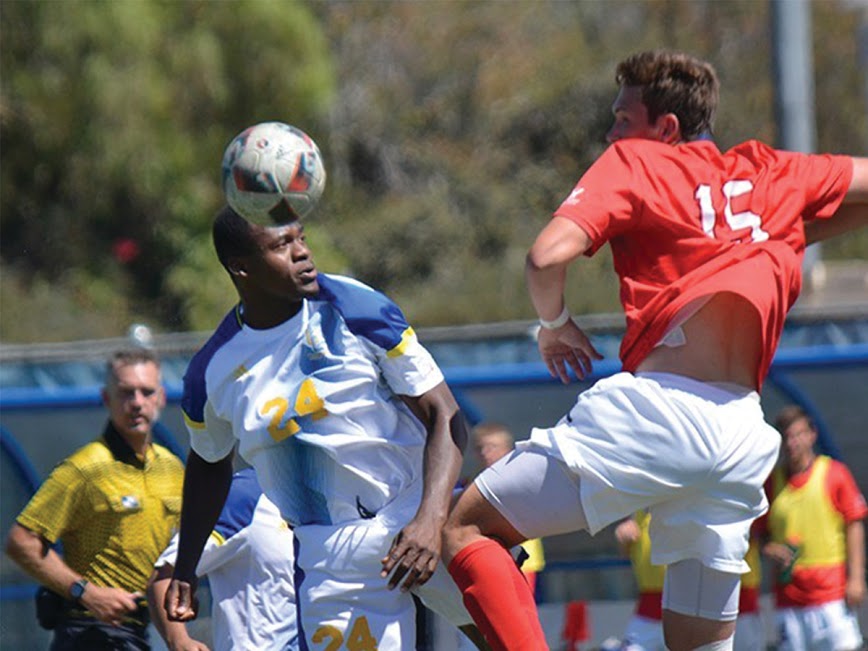 The Highlanders men’s soccer team (0-6-0) has had a rough start to the 2017-2018 season, losing all six of their games. Despite the slow start, Head Coach Tim Cupello says there’s more to those six games than what shows up in the loss column. “It’s been a challenging schedule,” admits Cupello, “our first five games were on the road so we’re away from home, coupled with a large number of incoming players into the program. So we were utilizing those first games to try and get a rhythm and figure out what our identity is going to be like for the season.”

While the team is struggling to find their stride early, they should find comfort in the fact that last season they didn’t have the hottest start either. The team went 2-4 in their first six games before having one of their best seasons in school history and finishing with a 9-10-1 record. Cupello believes the schedule has definitely influenced the slow start, saying, “Being on the road is a physical and a mental drain just because you’re constantly traveling, coming home, traveling, coming home, so you’re not sleeping in your own bed and you’re not in the kind of comfortable environment that you’re used to.” Cupello also recognizes the effect of the opposing team’s fan support, suggesting, “Their fans build them up and heckle our guys and it’s all part of that experience.”

The scheduling is just one factor contributing to soccer’s struggles. The team also graduated five players last season, most notably leading goal scorer Romario Lomeli, whom they now have to attempt to replace. “We have a large incoming class. We brought in 11 new players this year,” says Cupello. “We graduated a large class last year so we knew that we would have to integrate the new players and establish some new players on the team and that obviously doesn’t happen overnight, that takes time. We were expecting us to compete well once we get into conference play and come together as a group during our non-conference play.”

Adding 11 new players makes winning early extremely difficult because so much of the roster doesn’t know the philosophy or know their teammates’ tendencies, or where they want the ball. Since there are 11 players on the pitch, it’s essentially as if they added a whole new squad. Cupello has been through this before and used the same approach last season, using the games before conference play to find their footing before the games that matter.

Despite this group’s short time together, Cupello says the team has the same strength the program has always had: Unyielding determination. “I think the strength of this team and of our program has always been a never-give-up attitude, playing with a little bit of a chip on their shoulder. We’ve had some years where we were overlooked in the past and we’ve done really well. We’ve proved to people that we’re a strong program. I think we maintained that same character and that same DNA.” So far this season that persistence hasn’t done much for their record, but Cupello thinks it’ll help once the team get back onto its home turf. Nine out of the Highlanders’ first ten games this season are on the road.

Cupello reiterated that scheduling has played a large factor in the 0-6 start because his team loves playing in front of its home crowd. “Our home games are great for us. Our guys love playing in front of our home fans,” attests the third-year head coach. “They love when our students come out and with school starting soon, the students will be back on campus and when we get good student support our players feed off that energy and we’ve had games where we’ve had a sellout crowd with fans that are cheering and chanting and getting really into it. That helps.” The Highlanders won’t be able to afford that luxury too much for the remainder of the season as only five of the team’s remaining 11 games are at home.

There is plenty for this team to improve on throughout the remainder of the season but Cupello finds that “it’s just little details. We’ve created some really good chances to score and haven’t finished. We’ve had small defensive errors that allow teams to get a goal on us. We’ve lost four games by one goal. It’s just little mental lapses, being confident in front of goal when we get chances and being stingy defending our own goal.”

The Highlanders will try to improve on all of the little things and more while playing their remaining 11 games. Cupello and company are excited to finally get to play in front of UCR’s students on Oct 5 and he made a plea to the team’s fans to come out and support the squad. “Come out to our games, it’s a great environment when the students are there and when the students are there they get behind us. The Riverside community comes out as well, but students are the ones that bring the energy on a college campus. Hopefully we’ll see a lot of them out there.”