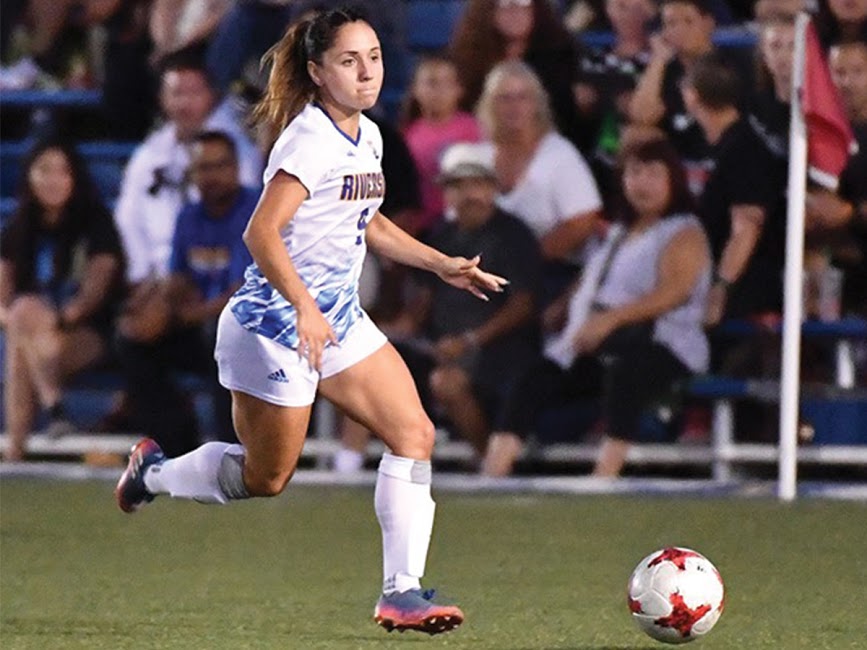 The UC Riverside women’s soccer team (3-7-2) split their first two games of the week after losing to the University of San Francisco (4-5-2) on Friday, Sept. 22 before bouncing back in a big way to take a 3-1 victory against Cal State Bakersfield (5-7-0) on Sunday, Sept. 24.

A common denominator in both of these games was the defensive pressure exerted by senior forward Ashley Webb. Despite not being able to put one in the back of the net, Webb had three of the team’s five shots on-goal in the game against San Francisco. She finally got on the board against Bakersfield and also set up junior midfielder Quinley Quezada for a goal.

Last week, Head Coach Nat Gonzalez mentioned Webb as a player he wanted to see continued improvement from and he definitely saw some in her recent performance. Gonzalez knows Webb is a huge part of this team due to her athleticism and three years of experience, both of which help her to lead the team’s offense and put pressure on the opposing defense by constantly getting in front of goal.

Gonzalez noticed Webb back in 2016 during her time at Los Cerritos and knew he wanted her in his soccer program. In our conversation last week, Gonzalez recalled noticing she was “very athletic, good dribbler. She had a very competitive personality. That goes a long way when you’re up against it.” Webb’s competitive spirit is something that has an effect on the whole group according to Gonzalez. “I think what she brings is a personality at the top that’s contagious. I think she’s gonna lead by example a little bit more versus being a vocal leader.” Gonzalez also noted that, during practices and games, Webb’s teammates see how hard she’s working and mimic her effort every time they’re on the pitch.

Webb also has a physical style of play which is beneficial for her and the team because she’s able to handle physical defenders without getting worn down. Gonzalez emphasizes that it’s important for Webb to be able to handle that kind of physicality every night so she can continue to put pressure on the defense and give the team a chance to win.

When reflecting on the win over Cal State Bakersfield, Gonzalez sees it as a potential turning point for Webb and the whole team. “The Bakersfield game was the first time that I really saw her … (slow) her brain down to where she was able to look up and find options,” he says. “Getting a goal and an assist proved that.” Gonzalez added that he feels his team is in a great place going into conference play after changing tactics to pressure the ball constantly, and having some success.

The head coach admitted that the team didn’t have the best of starts, but he isn’t too concerned about it. “We had a rough first half of the season. I normally like to call it non-conference season. It’s funny, our freshman call it our preseason.” Gonzalez began to welcome the freshmen definition saying, “To me preseason is more like practice and this is the first year