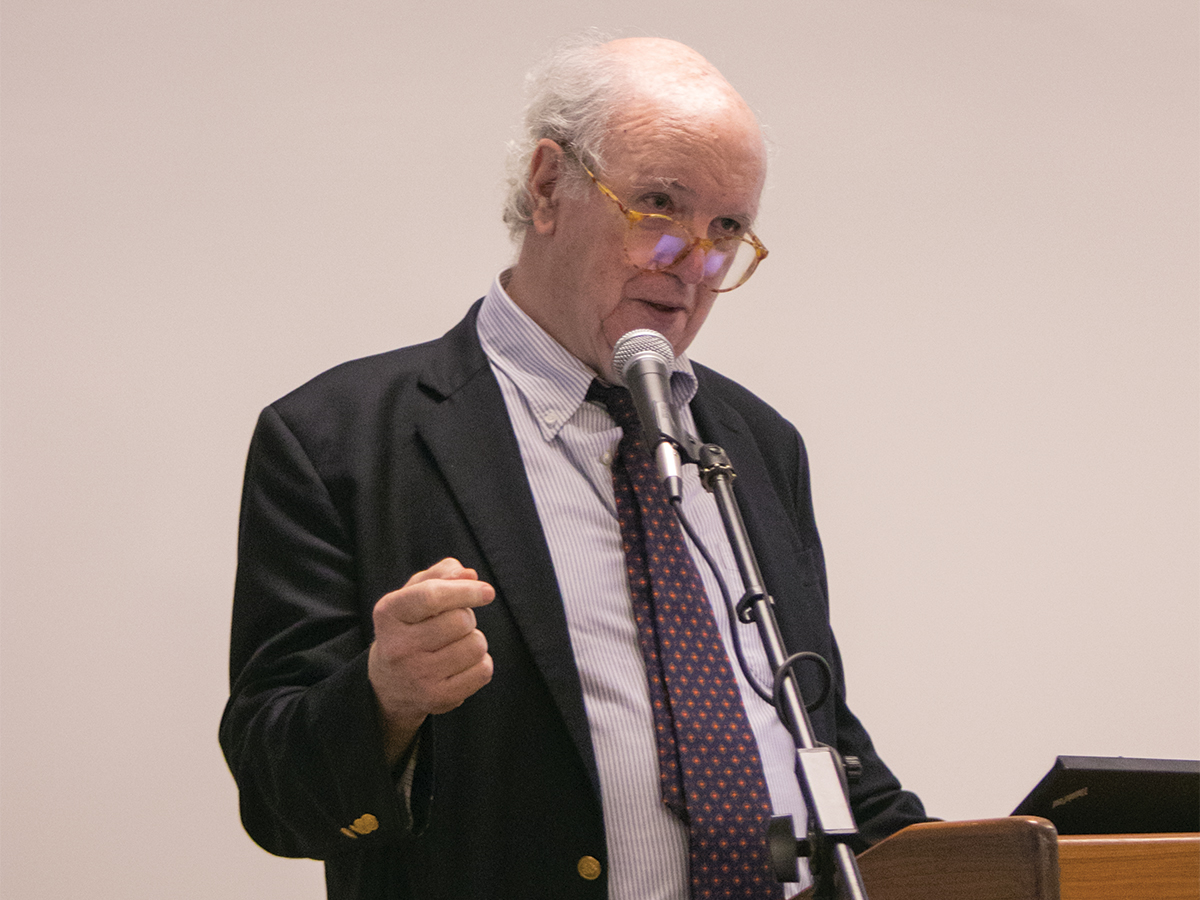 Thomas Edsall, leading political columnist for the New York Times, delivered a pointed assessment of the current political climate to an audience of about 40 students and faculty inside CHASS’s Interdisciplinary South 1113 on Thursday, Oct. 12.

The data and cultural contexts that inform his work were the focus of Thursday’s seminar. Entitled “Politics in the Era of Donald Trump,” Edsall’s lecture was premised upon two social developments he believes to be of equal salience when observing President Trump’s rise: The growing importance of white identity and the fear and hatred enlisted by red-blue polarization.

The former, per Edsall, is not a new development but one which he says first surfaced to the forefront of political discourse when President Lyndon B. Johnson and Republican presidential nominee Barry Goldwater were publicly divided on the Civil Rights Act in 1964. “This was the first time you have leaders of the two parties going head-to-head on a major civil rights issue,” stated Edsall. “That began when the Democrats … were seen as more racially liberal and the Republicans were seen as the party that was more racially conservative.”

Edsall argues this gap has noticeably widened since and, in the Trump era, has become convoluted by the relatively new political concept of white identity. “These are whites who see themselves as white and it’s important to their sense of who they are,” Edsall says when describing white identifiers, a term for white extremists.

Their thinking, though misguided, did not emerge without reason, according to Edsall. Consider that the glaring racial inequality of the 1960s led to greater cooperation between a socioeconomically diverse black community, driving the successes of the civil rights movement, or, that similar inequalities were the impetus for the unity that helped the Chicano movement achieve improved education and rights for agricultural laborers.

White nationalism, according to Edsall, is driven by a similar logic. Its followers — generally of the white working class — not only view their setbacks (affirmative action and mass immigration, to name a couple) as of equal magnitude, but as justification for newly empowered supremacist beliefs. Edsall detailed this in his Aug. 24 column: “The furious reaction to many different historical and cultural developments — mass immigration; the success of the civil rights and women’s rights movements; the election and re-election of a black president; and the approaching end of white majority status in the United States — has created a political environment ripe for the growth of white identity politics.”

Edsall elaborated on this idea Thursday, noting that while white identity was underlying prior to Trump — Richard Spencer coined the term “alt-right” almost a decade ago — the notion surfaced at an unprecedented rate during Trump’s campaign. “The idea of white identity has not really surfaced in the kind of strength that it has until this last election,” he stated. The attraction between Trump and white extremism, according to Edsall, is evident partially through the first survey he referenced Thursday, which, in 2016, found that 81 percent of those who voted for Trump in the Republican primaries considered white identity as “very important.”

The effect, he suggests, is a greater disparity between the political red and blue. “It is now such that the two sides see themselves not just as political adversaries but as literal enemies,” Edsall stated during his lecture, “both sides … see each other as hostile to their way of being.”

Still, the tenability of intensified white nationalism in a country where Edsall says the white working class is a declining constituency incites a fair amount of grey area. When a faculty member in attendance questioned whether the recent rise in white pride is sustainable or merely a “death rattle,” Edsall offered, “It’s too early to tell. No one thought that Trump could win … a lot of people thought that the Obama coalition created in 2008 and 2012 was going to be a majority coalition that would sustain the Democrats … and Trump would be a knock off. It wasn’t. So something is going on and I don’t think we have an answer to that question.”

Edsall has been writing for the Times since 2011 and has previously served as a professor of public affairs journalism at Columbia University, where he continues to teach in an adjunct capacity.

Edsall’s lecture was the inaugural event of “Responses to Economic Inequality,” a fall seminar debuting courtesy of the Mellon Advancing Intercultural Studies project funded by a $250,000 grant from the Andrew W. Mellon Foundation awarded to UCR’s Center for Ideas & Society. The center will be holding their 2017 fall reception at 5 p.m. this Thursday, Oct. 19 inside College Building South.