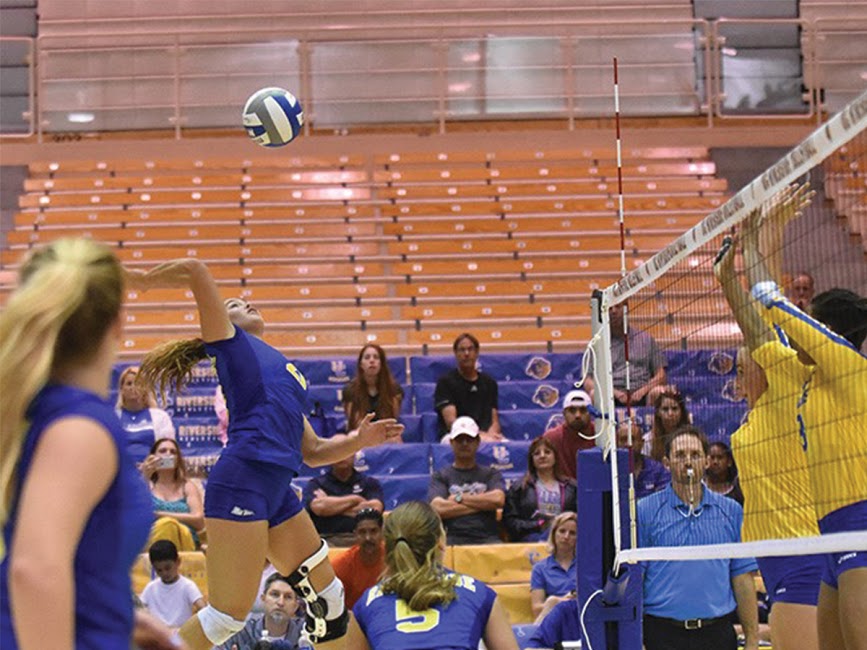 After picking up their first Big West Conference win against Cal State Fullerton 3-1, (4-15, 0-7) the Highlanders (9-10, 1-6) took a rough loss 3-1 at home to UC Davis on Friday, Oct. 13 (11-9, 3-4). The Davis game also ends the Highlanders’ three-game homestand and begins a tough three-game road trip. However, sophomore outside hitter Mickayla Sherman feels like this team is just now reaching their potential for how well they can play. “I feel like the Hawai’i game was an eye opener for us, in terms of what we can do,” explains Sherman, “We can compete. Definitely.” In said Hawai’i game, the Highlanders actually took the first two but were unable to close the match out.

While the Hawai’i game was an eye-opener for the team, it was not for Head Coach Michelle Patton-Coleman, who already believed this team was a legitimate competitor. “I know what they look like individually on their best days,” Patton-Coleman explains of her players, “Now it’s about ‘Can you put it together?’” The Highlanders have certainly showed signs of being able to string together multiple sets at a high level, and junior outside hitter Kaiulani Ahuna sees it developing in practice, saying, “We’ve come a long way in practice, we’ve been grinding. And we want to show everyone how much.”

The practice atmosphere has been hugely important for the Highlanders this season. As Ahuna mentioned on Friday, not having a defined star has allowed multiple players to step into a leadership role in both practice and games. Patton-Coleman believes that the team’s lack of a go-to superstar keeps all of her players sharp at any point of the game, and creates a trust in one another. When asked about her team-leading kills-per-set average, Ahuna exemplified that trust, saying, “I give a lot of credit to my setters and my passers, can’t do anything without them.” For Patton-Coleman, this has translated into positive results on the floor, as she explains everyone wants “To be (who) the ball comes to. And they’re all capable.”

Patton-Coleman spoke to us a few weeks ago about how she sees the most important aspect of the game as “not who starts, it’s who finishes,” and finishing matches is something the Highlanders are trying to improve on. Sherman in particular believes that energy and positivity are the components this team needs in order to finish matches as strong as they start them.

Unfortunately, the Highlanders were unable to translate their energy and positivity to their matchup against UC Irvine (17-2, 5-1) as the Anteaters took the match 3-0. UC Riverside’s offense was unable to get into a rhythm this game, evidenced by the 27 total kills from the whole team. The Highlanders did make the final set competitive, however, with a five point run at the end of the set to close the gap 23-21, until the Anteaters pulled away.

UCR is back on the court Friday, Oct. 20 in Hawaii’s gym, for a rematch of one of the closest matches the Highlanders have played all year.