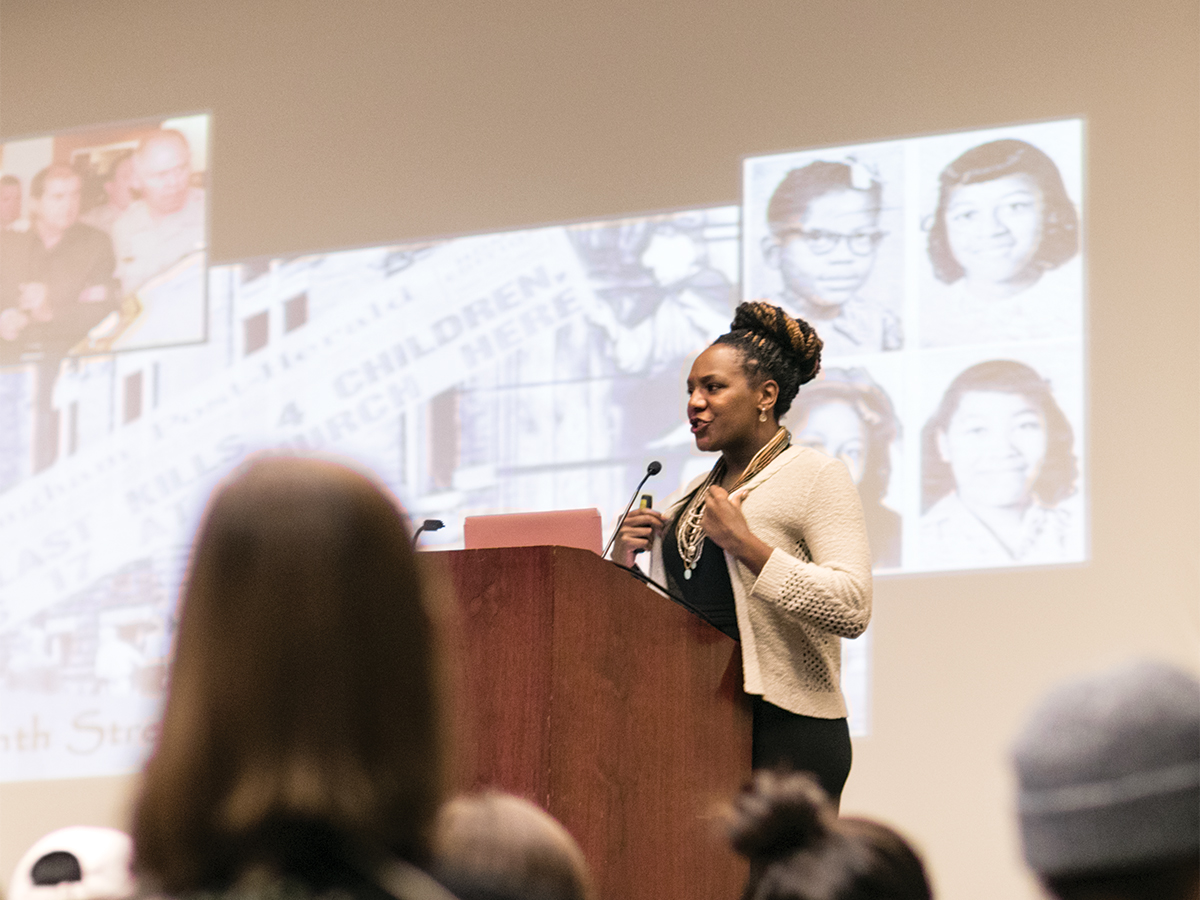 There is a moment in the autobiography of Dr. Martin Luther King Jr. where, when reflecting on his time as a freshman at Morehouse College in 1944, King recalls becoming enlightened by Thoreau’s theory of civil disobedience. “I became convinced that Noncooperation with evil is as much a moral obligation as is cooperation with good,” he writes.

Bree Newsome revisited King’s words at the start of her seminar held Wednesday, Oct. 18 inside HUB 302, juxtaposing them alongside the photo of King’s arrest following a nonviolent protest in Birmingham in 1963 — a seminal period in the Civil Rights Movement. That year, leading civil rights figure Medgar Evers was murdered in his driveway by a white supremacist in Jackson, Mississippi at the age of 37. That year, Cynthia Wesley, Denise McNair, Carole Robertson and Addie Mae Collins perished in the Sixteenth Street Baptist Church bombing carried out by Klansmen in Birmingham, Alabama.

If Newsome’s name sounds familiar it is likely because of what occurred outside of South Carolina state capitol grounds in June of 2015, when Newsome — a Charleston native — scaled a 30-foot pole to remove its Confederate flag, influencing a social media campaign to #KeepItDown. Directly, the act was a response to the tragedy eerily reminiscent of the ‘63 bombing: White supremacist Dylann Roof opening fire and killing 12 black churchgoers inside downtown Charleston’s Emanuel AME Church.

More broadly, Newsome’s attempt at removing the flag was a minor retaliation against the systemic and explicit affliction of black people across the diaspora — from slavery to police brutality to environmental racism. The flag represents its persistence. Removing it, is Newsome’s civil disobedience.

In more ways than one, Newsome is still climbing. Since 2015, she has led a number of grassroots efforts in Charlotte as a community organizer, working with social justice groups like IgniteNC and The Tribe. Today, her focus is centered on obtaining housing justice for low-income men and women of color in Charleston.

This is part of the reason why, when she and I spoke following the lecture, the 2015 incident wasn’t mentioned but twice. Rather, she elaborated on her current efforts and spoke at length about permeating the system and adjusting the approach to modern day activism.

On the transformation of combatting racial injustice …

I think what is maybe different now is people aren’t talking about assimilating at this point. There is no assimilating into white supremacy. We’re talking about the collapse of white supremacy, we’re talking about the changing of institutions from being fundamentally racist into being institutions that actually work for everyone. A lot of the ideas around what that looks like are theoretical because so much of it we haven’t had a chance to put into practice yet. A lot of people are really operating off of theory right now. Practically, though, if you’re asking what I think that looks like, I think we need major constitutional change at the very start. I would like to see us have maybe a new Bill of Rights that affirms human rights, that defines things like housing and healthcare as being a human right — just basic things like that. Is that where we’re at in 2017? No. In 2017 we’re just a few months into the Trump administration and I don’t know how that plays out.

On the role of social media in contemporary activism …

I think social media is a powerful additional tool and that’s kind of how I would describe it. I don’t think it is a replacement for anything that has existed prior to now. It’s a great tool for globalization, it’s a great tool for awareness, but if we’re really trying to move some stuff, that’s not happening on social media. That’s still old-school. We’ve got call lists, we’re making phone calls … Because if we’re trying to change culture and community, you have to be face-to-face, you have to be interacting with people for that. It can’t just be on social media and we show up at a rally as a mass and then we just disperse … or a hashtag, or just communicating online. It doesn’t work. A lot of people in my community are not online, they’re not on Twitter.

On her efforts to obtain housing justice in Charlotte …

We have an affordable housing crisis. But it’s really even more than affordable housing, because the way they define affordable housing is by whether or not a family is spending more than 30 percent of their income on housing. That definition cuts a whole lot of people out, because 30 percent is more for some people than it is for others. So that’s why I prefer the term “housing justice,” and I think that speaks more to the right of a human being to have access to this essential part of living — a house. So I’m doing a lot of organizing around pushing for that right now because I think that’s at the intersection of so many issues. A lot of people are being displaced. So not only is the cost of housing going up but people who have lived in neighborhoods that have been segregated for decades, where the city is not investing money in those neighborhoods, now those people are being pushed out. Now that it’s prime real estate, now that people are wanting to economically invest in it, they’re being displaced.

I can just speak from my experience. I think from 2013 to 2016 in particular it was largely reactionary, we were constantly reacting to things. The death of Trayvon Martin, this person getting killed, that person getting killed, we were protesting in response trying to show that this is a problem. I think the 2016 election sucked up a lot of energy and air out of everything in this country, including the movement. A lot of what’s happening now is, there’s still a lot of reactionary protesting, but you have a lot of focus on sustainable organization. How are we strategically building outside of the system but also penetrating the system when we need to? You have a lot of people from the movement running for office now, a lot of grassroots activists running for offices. So the main change I’ve seen is it was kind of a day-by-day reactionary thing and now we’re like OK this is going to be years.

The Highlander thanks the Women’s Resource Center for organizing this event.