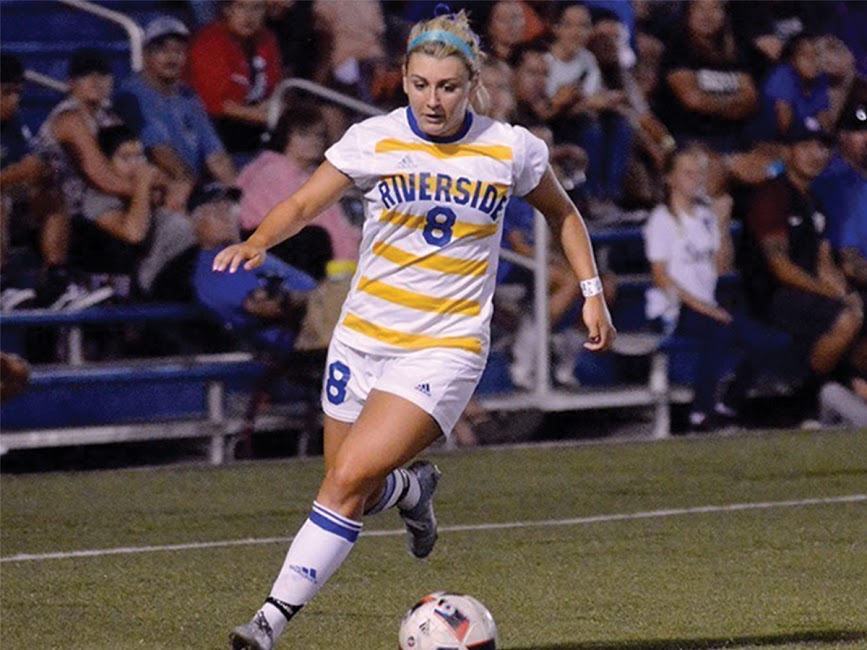 UCR’s women’s soccer team (8-11-2, 5-3-0) finished up its season on Thursday, Nov. 2 with a loss against Cal State Northridge (9-4-8, 4-1-3) in the Big West Tournament Semifinals. The Highlanders were able to hold the Matadors scoreless throughout the first half, but their defense could not hold them off in the second.

CSUN was first able to break through in the 56th minute when redshirt senior forward Cynthia Sanchez scored off of a throw-in and give the Matadors the lead. Northridge scored again in the 79th on another throw-in and added another goal in the 84th minute to win the match 3-0.

Seniors Alanna Guzman, Hailey Maxwell and Amanda Apelian have been on the roster each of the last four years, and the trio finish their careers with a 15-15-2 record in Big West play during their time on the team, which is the second-most conference wins and third-best winning percentage for any four-year stretch for UCR women’s soccer. Despite the disappointing end to the year, Apelian, a redshirt senior forward, looks back on this season as one filled with great memories and zero regrets.

When Apelian was seven years old, her parents signed her up to play soccer after seeing a flyer for a local league and they decided she should try it out because no one else in her family participated in athletic activities. Apelian turned out to be pretty good as she led Westlake High School to four straight Marmonte League Championships and was contacted by coaches throughout her freshman year about potentially playing Division I soccer. “I didn’t really realize I was good at soccer until I hit freshman year of highschool,” Apelian shared. “College coaches started contacting me. I realized I could potentially play soccer at the Division I level.”

Once Apelian signed with Riverside, adversity immediately struck as she was forced to have two hip surgeries before playing in a single college match. However, looking back, Apelian finds that the proudest moment of her soccer career only happened because of that injury saying, “Coming back from a double hip surgery was my greatest accomplishment. I redshirted my freshman year at UCR, so I started my first year my sophomore year and after I recovered from two hip surgeries my first game back I scored the game winner.”

Amanda says that playing soccer has taught her plenty important life skills that she could take with her to reach her goals away from the pitch, the most important of them being competition. “I learned how to be competitive,” Apelian shared. “Not only on the field, but in the classroom trying to get the best grades, trying to be the best student.”

For seniors on the roster such as Apelian, this season was their last go-around on the collegiate circuit before turning their attention to what comes after soccer. For Apelian that means looking back to where she grew up in Westlake Village. Post-graduation she wants to go back to Westlake Village and teach high school English. Apelian realized she had an affinity for English when her teammates would ask her to review their papers, which helped their grades improving drastically. Apelian’s goal further down the road is to get her Ph.D. and eventually become an English professor.