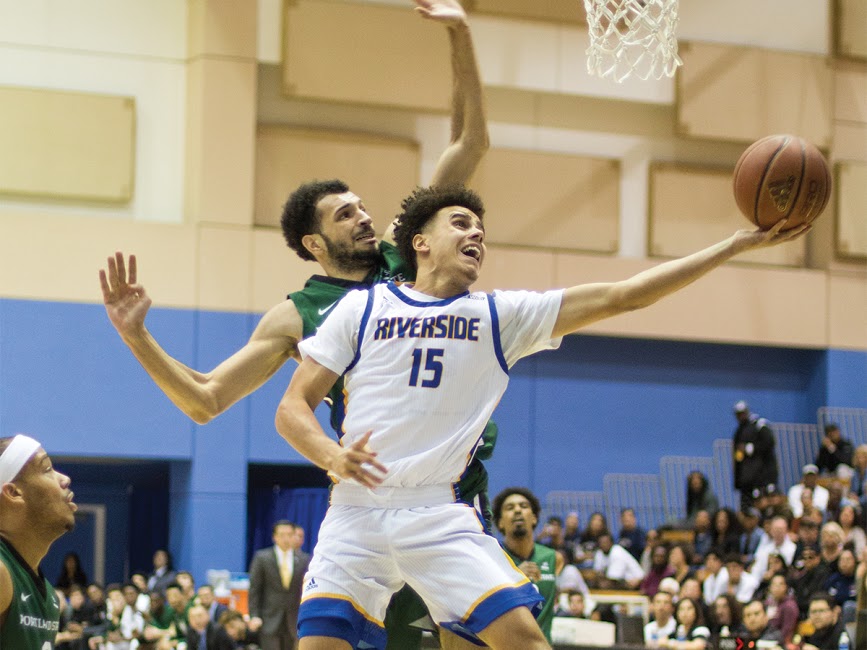 UCR’s men’s basketball team (1-2) started the week off with a 76-64 loss against Loyola Marymount University (1-1) on Wednesday, Nov. 15. The Highlanders had an opportunity to start 2-0 for only the second time in the program’s Division I history, but the team struggled to take care of the basketball in the tough road loss, committing 19 turnovers.

Senior forward Alex Larsson and sophomore point guard Dikymbe Martin were both standout performers in the loss as Larsson recorded his second straight double-double, scoring 14 points, and Martin poured in 20 points while dishing out five assists. Both players and their Head Coach Dennis Cutts acknowledged that they weren’t as sharp as they wanted to be. “I give Loyola Marymount credit,” Cutts said. “They played very aggressive defensively, switched some things up. Got us a little out of rhythm. We weren’t as sharp as we were on Friday. We got a great effort from LMU.”

The Highlanders also got a great effort from undefeated Portland State University (3-0) on Saturday night’s Homecoming matchup. Portland implemented a full court press throughout the game that forced UCR out of their comfort zone and led to a lot of turnovers. For the first 15 minutes it was a back and forth affair until a possession that seemed to bring momentum onto the Highlanders side. After a dunk from DJ Sylvester to cut the deficit to one with 5:24 remaining, Portland State was able to make three straight 3-pointers to pull away from the Highlanders and go into halftime with a 47-36 lead.

This was a sloppy game for both sides as the teams combined for 47 total turnovers. Neither of the teams had a significant edge in that aspect of the game, but Cutts and the Highlanders definitely want the number of turnovers to be lower than 23. Martin struggled to take care of the ball in this one, committing six turnovers while only dishing out one assist.

The Highlanders had four players with double-figure point totals and were led in scoring by freshman Ajani Kennedy who finished with 18 points on a perfect 6-for-6 shooting night. Larsson, Rosser and Martin were able to finish in double digits for the third straight game.

The Highlanders will look to bounce back from this two-game losing streak in their next game against Western New Mexico on Wednesday, Nov. 15 in the SRC arena at 7 p.m.