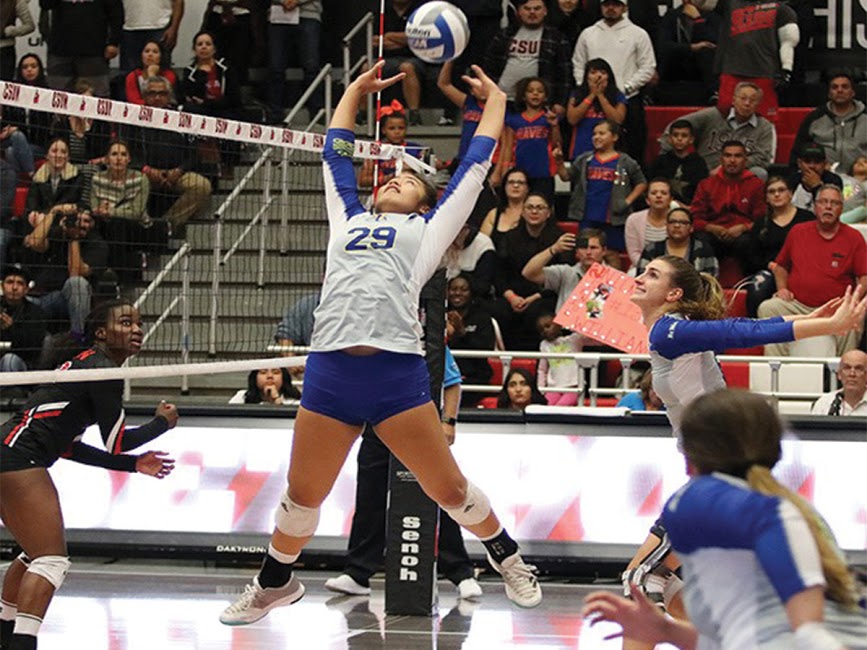 The Highlanders (10-17, 2-13) kicked off their season-ending homestand on Friday, Nov. 17 against Big West leader Cal Poly (26-2, 16-0). Head Coach Michelle Patton-Coleman and her squad were looking to finish the season on a positive note against a team they have not won a set from since 2014.

The first set broke the drought, as the Highlanders jumped out to a quick 6-1 lead that would carry up to 17-10. The Mustangs made it competitive, however, as they came within one at 20-19 before UCR put the set away on a five-point run. Set number two was a bit of a lopsided affair, as Cal Poly jumped out to a quick lead that they would never lose, winning the set 25-13. Set number three also went to the Mustangs, but the Highlanders managed to make it close as they rallied from an eight-point deficit to come within one point, until Cal Poly closed it out 25-21. The fourth and final set began with the Highlanders leading 8-7, but Cal Poly ignited a 13-point rally that ultimately sealed the set 25-17.

Patton-Coleman and her team had no time to lament on the loss, as they were back in action again on Saturday, Nov. 18 for senior night against UC Santa Barbara (8-19, 7-8). Going into the game, Patton-Coleman expected the special night to give her team an extra edge, but she stressed intensity and finishing sets was still the ultimate goal for Saturday’s match. “It’s just one of those things where you’re just waiting for it to click,” Patton-Coleman said, referencing her team’s need to finish sets with the same intensity they start with.

That intensity was certainly there in spades, as the Highlanders made quick work of the Gauchos, defeating them 3-0. The first set began with UCSB leading 6-4, until the Highlanders scored 16 of the next 18 points to put the set away 25-20. Set number two was more of the same as UC Riverside found themselves trailing yet again, 8-6 until they flipped the script with a 10-point run and a 25-18 victory. The third and final set once again opened with UC Santa Barbara ahead 7-6, but the Highlanders successfully navigated their way out of the jam, mounting a three-point rally and a nine-point rally to close the set and the match 25-20. The win finally snaps the Highlanders’ nine-game losing streak.

The Highlanders’ final match of the 2017 season is on Tuesday, Nov. 21 in the SRC against Cal State Northridge at 7 p.m.