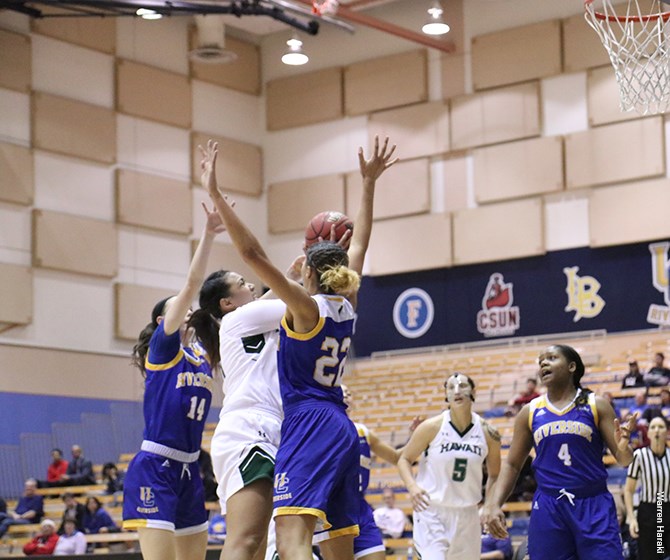 UCR’s women’s basketball team (6-14, 4-4) rode their momentum from their Jan. 13 win against Cal State Fullerton as they took on Hawai’i (8-11, 1-5) in the SRC Arena. The Rainbow Wahine jumped out to a 6-0 lead in the first quarter, but the Highlanders flipped the script with a 14-2 run to take the lead 14-8. UCR never let their foot off the gas, as Hawai’i was only able to come within four points before the first half ended with a 19-2 Highlander run that extended into the third quarter. The offense continued to hum in the second half as the Highlanders shot 54.8 percent (17-31) and went 3-3 from deep. UCR senior guard Lauren Holt led all scorers with 24 points and Michelle Curry chipped in 15 points, nine rebounds, five assists and three steals.

The second half opened with a pair of Curry free throws that edged the Highlanders ahead by one point, 32-31 until CSUN jumped ahead by eight. UCR was able to cut the deficit to only one after Curry split a pair of free throws with a minute remaining in the game, but CSUN was able to score with 19 seconds remaining to ice the game. The Highlanders were unable to get a field goal in the remaining 3:14 of the game.

Holt led all blue and gold scorers yet again with 17 points and was the only Highlander to score a three, going 2-9 from beyond the arc. Holt has now extended her double-digit scoring streak to 13 games. Curry wasn’t quite able to find her touch in the game as she finished with 12 points on 2-12 shooting from the field, but she was deadly from the line, finishing 8-10. Redshirt sophomore Skyler Lewis recorded her fourth double-double of the year with 10 points and 12 boards to go with four assists.