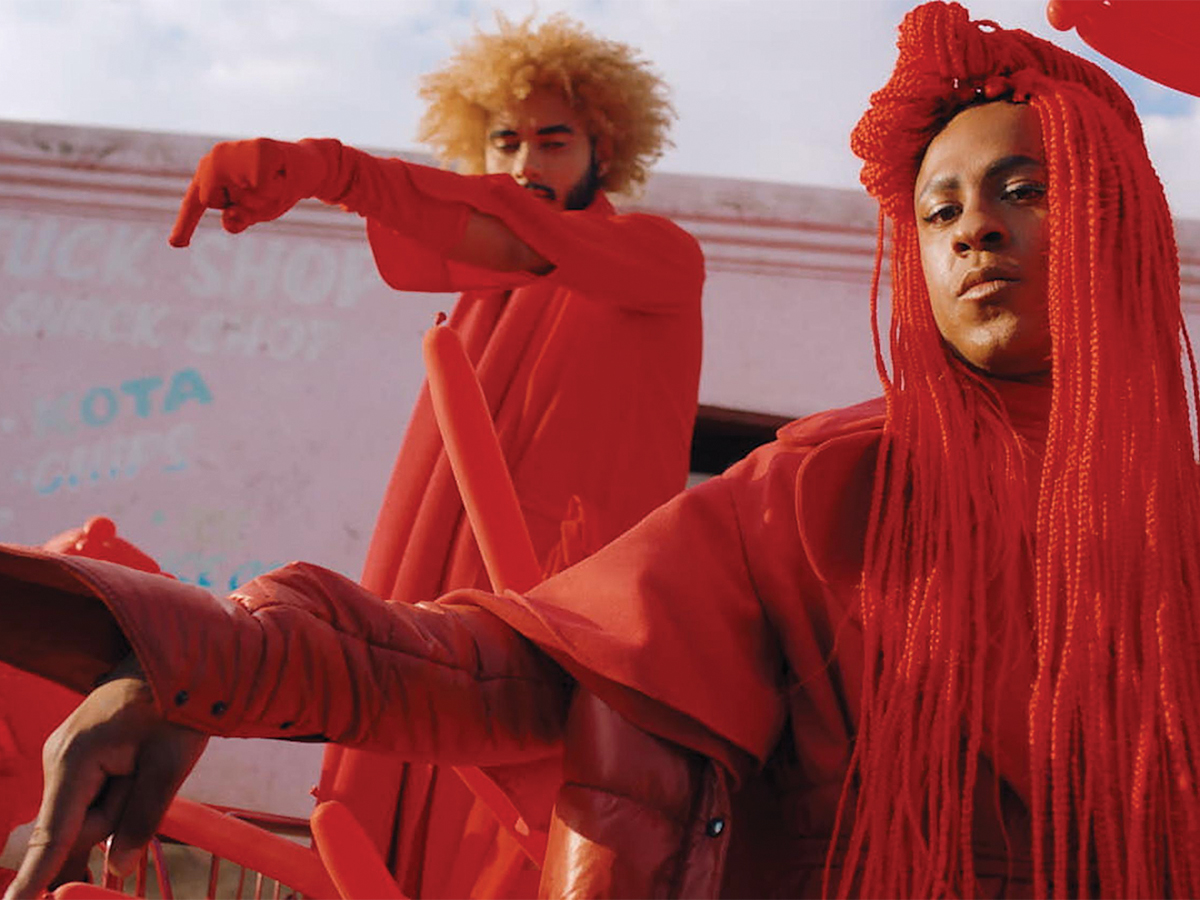 In the Mykki Blanco-led documentary “Out of This World,” the queer worlds of Johannesburg are lusciously paced. Shots of Blanco twirling tulle in a fabric shop become regal and endlessly elegant; landscape shots of Johannesburg’s tangerine sundown flicker in the factory smog amidst endless highways. It’s a city with worlds bubbling just underneath its industrial mantle. The documentary, an i-D production directed by Matt Lambert, curves and contours the vibrancy of the South African city’s queer community.

The structure of the documentary situates itself between classic documentary tropes like the interview and political action like their femme march and with the steady mundanity of life like going to swap meets or having dinner. The film is an emphasis of the inseparability of life and struggle that persists even after the cameras are off. It is the vibrancy of the film — the assistance when putting on an eyelash, the honest opinion on that skirt, the resilience of living as queer — that stays with you. Life reverberates in every scene.

In one scene, Blanco sits across from trans model Elle van der Burg. The two are getting their hair done and, like sisters, they are are giddy to fill each other in on their lives. Blanco asks, “Ok, I am going to be nosy now, how’s your love life?” Van der Burg blushes, then shares, “You’d think it’d be difficult, right? Being this invisible figure in public, but it’s pretty great from my side!” There is a bright smile puntacting the sentence — it’s a scene where van der Burg’s joy fills the room. Joy is the pivotal force of the documentary as Blanco clarifies in an interview, “We did not want to create another documentary that was just going to be a sob story, you can use this lens to find people who are thriving and living their lives despite oppression and injustice.” Here, joy is a generative and political force that ties and connects Johannesburg’s queer community together.

Johannesburg’s social knotting aligns with what former UCR English professor and literary theorist Fred Moten would describe to be an undercommons: Places and collective relationships that are supportive and often lifesaving for generating creative work like music, performance, learning, organizing or fashion design. The documentary zooms into these femme undercommons that poignantly document the vitality of these places of gathering.

Joy, and its forms — friendship, collectives and, at its most ecstatic, the party — glue these undercommons together. Blanco, at one point, describes his own trans experience as a process rather than a cyclical linear experience. Van der Burg then affirms and shares a similar story of being trans not being instantaneous but rather ongoing, she says, “Not all of us have a wake-and-change thing — it’s a process.” Their casual conversation zooms past monolithic mainstream narratives of transness. It is something complex and rich something that often mainstream outlets are not willing or able to describe.

The conversation between Blanco and van der Burg is at ease — they can confide in one another. They chat about their experiences without a looming paranoia or frustrating misunderstandings. They can bring up the nonlinearity of trans-ness and then talk about boys, nightlife and their careers without it being sensationalized. They can throw their hands back and laugh.

The documentary surveys many one-on-one interviews that feel more or less like friends hanging out. And like the salon scene, it’s the banter and the catching up, even the gossip, between friends that makes it a pleasurable watch. It’s a gregariousness that calls to mind writer and artist Hannah Black’s account on the vitality of gossip among women under institutions operating on the gears of misogyny, homophobia and structural racism, as in cities like Johannesburg. In her essay, “Witch-hunt,” Black pulls from Marxist-feminist Silvia Federici’s “The Caliban and the Witch,” and its tracing of institutions in the late Middle Ages that led to the persecution of women known as the witch hunts. The witch that Federici describes — the midwife, the prostitute, the healer-turned-witch — is reflective of the moralization of female relationships.

She goes on to suggest that the villainization of female relationships resulted in the importance of gossip — secrets shared amongst women alone — and relationships that spiraled into communities of women treading along the jaws of the macho-machine. Like the binding forces of Blanco’s queer circle in Johannesburg, gossip, as Black suggests, is a generative force that continues to protect women today.

The uproar and criticisms of #MeToo draws from the sohomophoric surprise of men assuming that women are not talking to each other about their experiences of sexual assault in the workplace. Gossip and its inseparability from joy — and its forms of friendship, care, support and collectivity — are the glue behind the femme undercommons this documentary surveys. It’s as simple as Blanco and van der Burg talking about their shared and unique experiences of their trans identity, dialogue that can be life-affirming for black femmes and queers of color alike. When women or femmes talk to each other to protect one another there is power. It can be lifesaving.

The film graciously is able to capture Johannesburg’s queer underground of millenial black life and their strides toward world-building and art production. There is no sense of intrusion or exploitation by the camera. Instead, the camera simply rolls and disappears in between intimate moments of laughter and gossip.

Much of its poignancy is accredited to the delight that is Blanco; he steals the documentary with his sincerity and warmth. His sense of respect and love for the South African artists perfumes the documentary. Receptive of his own differences and interested in understanding their own. Blanco draws on the differences between queer experiences of color and shows how these can be productive and formative for resisting a world that desires to drown them. In one scene that could double as a performance or portrait, Blanco and FAKA (Fela Gucci and Desire Marea) line up behind the dusk blue horizon line wrapped in a cerulean skirt. Graciously they wave their arms back and forth in unison. It is a moment of unity.

Young Thug does not disappoint with his second epic, ‘Punk’