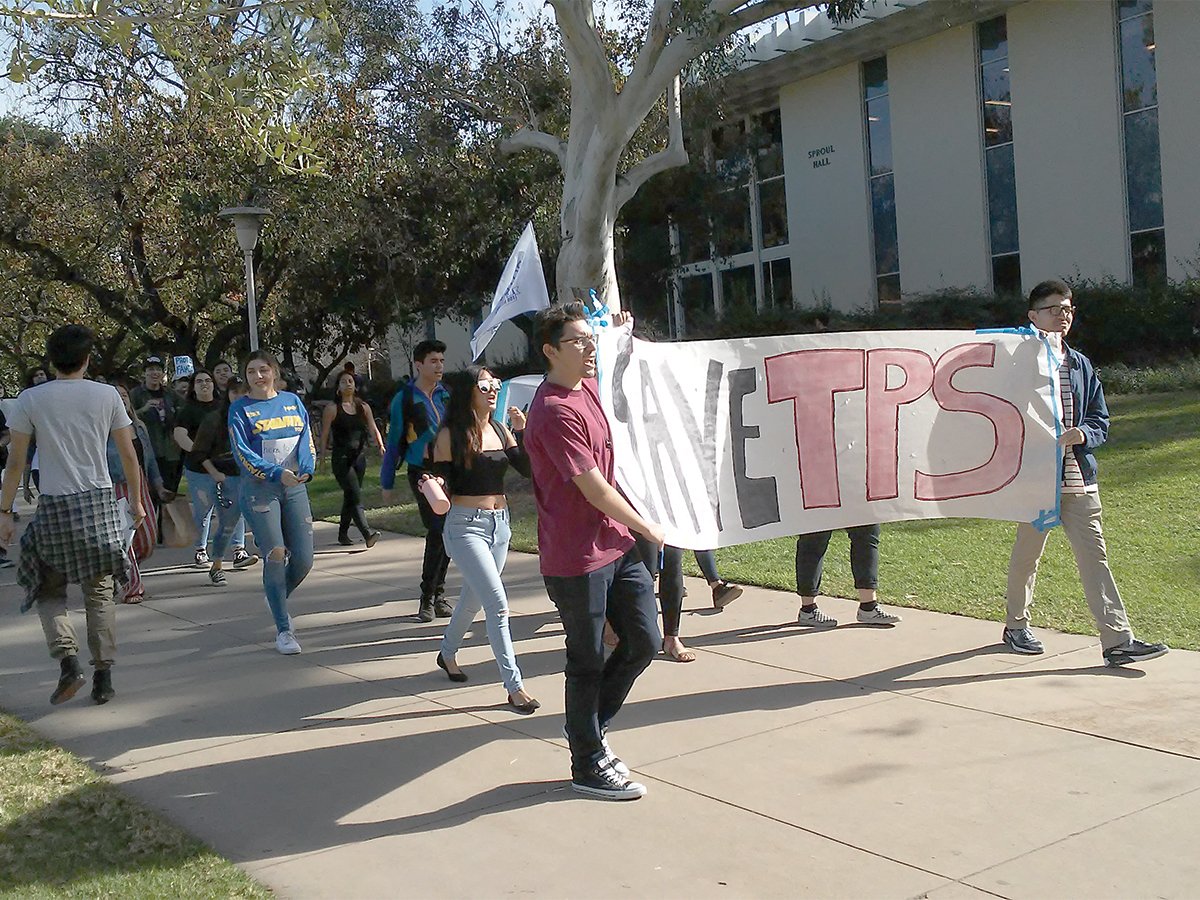 Student protesters were gathered around the UCR Bell Tower around 12:30 p.m. on Thursday, Jan. 18 to promote awareness of the Temporary Protection Status (TPS), which allows people who illegally immigrated from countries ravaged by armed conflict and natural disaster to temporarily reside in the United States.

This protest was organized in response to the recently planned removal of countries eligible for the program by the Department of Homeland Security. As of now, TPS eligibility to citizens from five countries (Haiti, Honduras, El Salvador, Nicaragua and Sudan) has been given an “expiration date” and will be removed from the program in the near future.

On Sept. 16 of last year, Sudan became the first nation intended for expulsion from the TPS program. El Salvador was most recently added to the list of to-be-rescinded countries on Jan. 8 of this year.

Then, the protesters passed by the Student Services building and directly through the crowded HUB, proclaiming that “refugees are here to stay,” and “to welcome them in every way.”

The protest concluded by the Bell Tower at 1:20 p.m., with protesters interlocking arms as they recited the Assata Shakur chant. Shakur was a member of the Black Liberation Army, a black nationalist group, and created the chant to inspire activists to fight against discrimination together.

Javier Romero, a third-year theater major, and leader of the march, found that it was his duty to organize this protest. “One of my best friend’s mothers was under TPS many years ago and the constant fear that it might be revoked always loomed over their family,” he shared. “Doing nothing would have been a dishonor to her and her entire family, and anyone else affected by TPS.”

Romero also noted that TPS is in need of greater publicity, contending that the Deferred Action for Childhood Arrivals (DACA) policy mainly assists Mexican immigration. He claims that TPS and other illegal immigration services and issues in countries besides Mexico tend to be overshadowed by the prominence of DACA.

“Oftentimes, what we notice is that when we look at DACA, and we look at something like TPS, for DACA, there’s always a lot more hype, a lot more energy, generally a lot more popularity,” says Romero. “Sometimes, the narrative (for other nations) gets taken away. I feel like (DACA) gets highlighted too often; a lot of people don’t know what TPS is.”

Victor Marroquin, a march participant and a third-year gender and sexuality studies major, emphasizes the importance of student awareness for all ethnic programs on campus to keep students informed of services relevant to themselves. Marroquin finds that immigrant students are “isolated from the larger Riverside community,” claiming they don’t have easy access to other programs. “What’s really going to be important is now having workshops, resources, bringing in with undocumented student programs at UCR, working with Central American Student Association, Chicano Student Programs and also African Student Programs,” he said.

Concerning on-campus resources, Romero highlighted Providing Opportunities, Dreams and Education in Riverside (PODER, “power” in Spanish). “They do a lot of teach-ins; they host ‘Legal Hour,’ where they let immigrant people know, ‘Hey, these are your rights, and if a police or ICE officer does this, then that’s legally not allowed.’”

Nicaragua, Sudan, El Salvador, Haiti and Honduras are all scheduled to be removed from the TPS program during this year or in 2019. Participants have until their designated dates to either leave the country or keep their citizenship with a different method, such as a Permanent Resident Card (or “green card”) or marriage to a citizen.