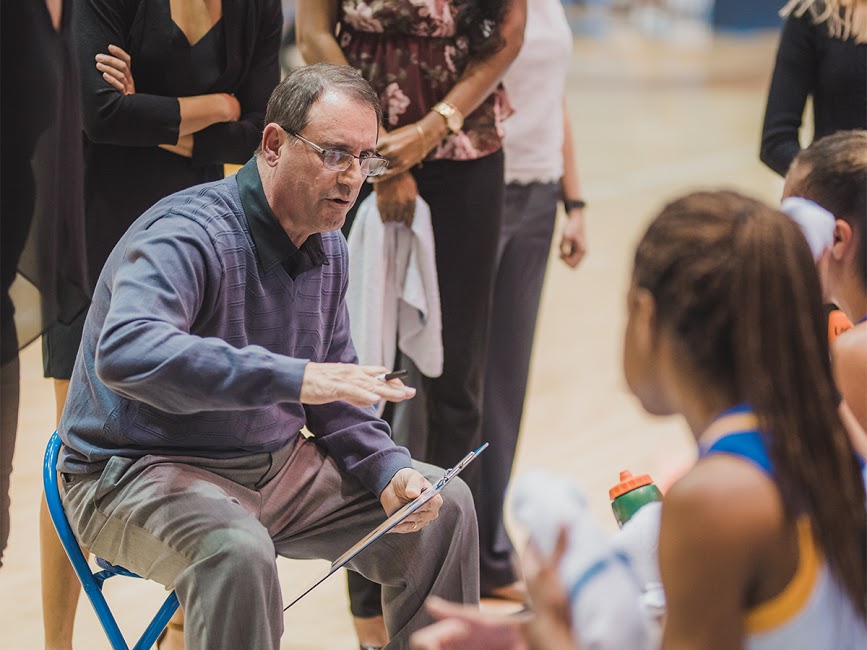 As UCR’s men’s and women’s basketball teams approach their final eight games of the year it’s clear that the two are on very different paths and they have been for some time. The men’s basketball team (5-16) is without a permanent head coach and stumbling throughout conference play, going 0-7 through their first seven games with Interim Head Coach Justin Bell at the helm. Bell was promoted to the interim position after former Head Coach Dennis Cutts was fired on Jan. 1.

The women have a similar overall record (6-15), but have upped their performance in conference play to own a 3-4 record. Both teams’ current in-conference records serve as an accurate example for what each program has been for the past 14 years with the men’s basketball team in flux, looking for their next head coach, and the women’s team being as consistent as ever.

Head Coach John Margaritis has been a calming presence over the entire women’s program while also having tremendous success at UCR during his 14-year tenure. The opposite can be said for the men’s program as they have gone through coach after coach with no real success. The importance of a good head coach is something that cannot be understated, especially in college basketball where they are responsible for recruiting and developing a culture within the program.

While the women’s team nailed their choice back in 2004 when they decided to give the vacant head coaching title to Margaritis — he spent 26 years coaching before coming to UCR, having led Northeastern Illinois to a NAIA Elite Eight and No. 6 national ranking in his early career — the men’s program has shuffled through six coaches in that same span, two of whom only held the position for one year. Through that same period the men’s program has only had one season where they won more than 50 percent of their games while the women’s team has had nine such seasons.

The men’s program’s lone successful season came in 2008-09 with arguably the best coach the Highlanders have had (not a very high bar), Jim Wooldridge coaching the team, but he followed up his most impressive season by missing the Big West Conference Tournament the next year and left after the 2013-14 season to take over as Athletic Director.

Margaritis on the other hand had almost instant success as soon as he joined UCR, leading the women’s program to consecutive NCAA tournament appearances in his second and third years on the job. He was also awarded the Big West Conference Coach of the Year award for the first time after the 2006-07 season in which his team finished 21-11 overall and 12-2 in conference. Margaritis again won the award in the 2015-16 season when his team was basically unstoppable and finished the year with a 23-9 record overall, and were literally unstoppable in conference finishing a perfect 16-0. Margaritis has led his team to three BWC Championships, three NCAA Tournament appearances, and three WNIT appearances.

The men’s basketball program should look to recreate what the women’s team did back in 2004 and hire a coach who can change the entire culture and have consistent success. While the two teams have been on completely different tracks this season and for years now, it’s time they start trying to replicate the blueprint for success set up by the women’s program which all started with the hiring of a good coach.