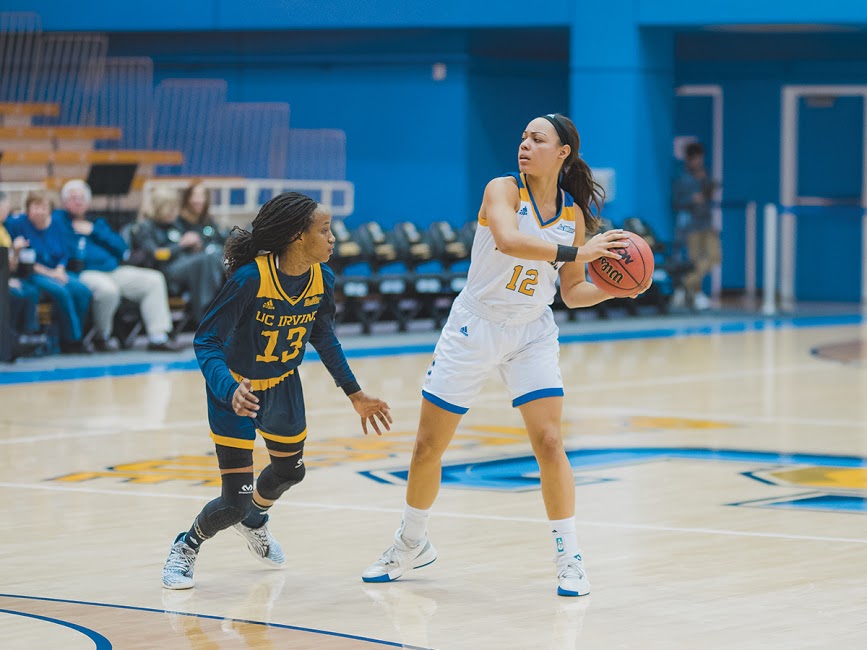 With fellow seniors Michelle Curry and Clemence Lefebvre sitting out with undisclosed injuries, guard Lauren Holt took charge for UC Riverside last Thursday Jan. 25, and posted a career-high 33 points, putting her just over the 1,000 career point mark. However, a shorthanded UCR (6-16, 3-5) was defeated by UC Irvine (12-8, 4-2), 81-71.

Riverside remained on top for most of the opening half, though their lead never reached more than 8 points. Being within striking distance for most of the game, Irvine went on a 9-2 run late in the third quarter, taking a 57-50 lead. Irvine guard Lauren Saiki connected on 10 of her 14 free throws in the final two minutes of the third quarter alone, finishing 12 of 16 from the line.

It seemed like every time Riverside was close to tying the game, they’d foul an Irvine player on the other end. Even after Holt drained two consecutive threes to cut the Anteater lead to 61-58, more free throws from Saiki, as well as junior guard Morgan Green, slowed down the pace that Riverside began to pick up.

With the deficit at 65-60, UCR sophomore Marina Ewodo banked in a three, bringing the Highlanders within two with just under five minutes left to play. This would end up being the closest deficit for the remainder of the game, as UCI freshman Jordan Sanders would sink two free throws moments later, contributing to the Anteater’s 14-6 run in the closing minutes to take a 79-69 lead — their largest of the fourth quarter,.

Holt has now scored over 20 points in three of her last four outings, reaching a career-best of 14 consecutive games that she has scored in double figures. Holt also reached a career-high at the charity stripe, shooting a perfect 8-for-8.

Sophomore guard Jannon Otto had a career night from the line as well, shooting 7 of 10, just missing out on a double-double with 15 points and 9 rebounds. She also finished with four assists and a steal before fouling out late in the fourth.

Free throws proved to be the difference maker for this game, as UC Irvine went 33 of 43 from the line, compared to UC Riverside going 17 of 23.

Another slow start to the second half resulted in UC Riverside playing catch up for most of the second half as they fell to Hawaii (2-6, 9-12), 57-63. The Highlanders led after halftime, 31-29, but were outscored 21-9 in the third quarter. Hawaii led for the majority of the game, 32:29 to be exact, while Riverside only led for 3:23.

Holt led the team in scoring again with 22 points, but struggled to shoot the three ball, going 1 for 6. These struggles from deep go for rest of the team too, as they shot an abysmal 2 of 17 from beyond the arc.

Though it doesn’t really show in the final score, free throws would again be one of the major factors that decided the game. Hawaii’s Sarah Toeiana connected on 9-of-12 free throws alone, with her team shooting 22 of 33 total. This is in sharp contrast to UC Riverside only shooting 15 attempts from the line, knocking down 11.

Curry still sat out this game as Lefebvre made a brief return to the court, going scoreless in her three minutes of action.

The Highlanders will then head to Cal Poly San Luis Obispo to try and split the season series after losing their conference opener in overtime, 82-87. The game is on Saturday, Feb. 3 at 2 p.m.