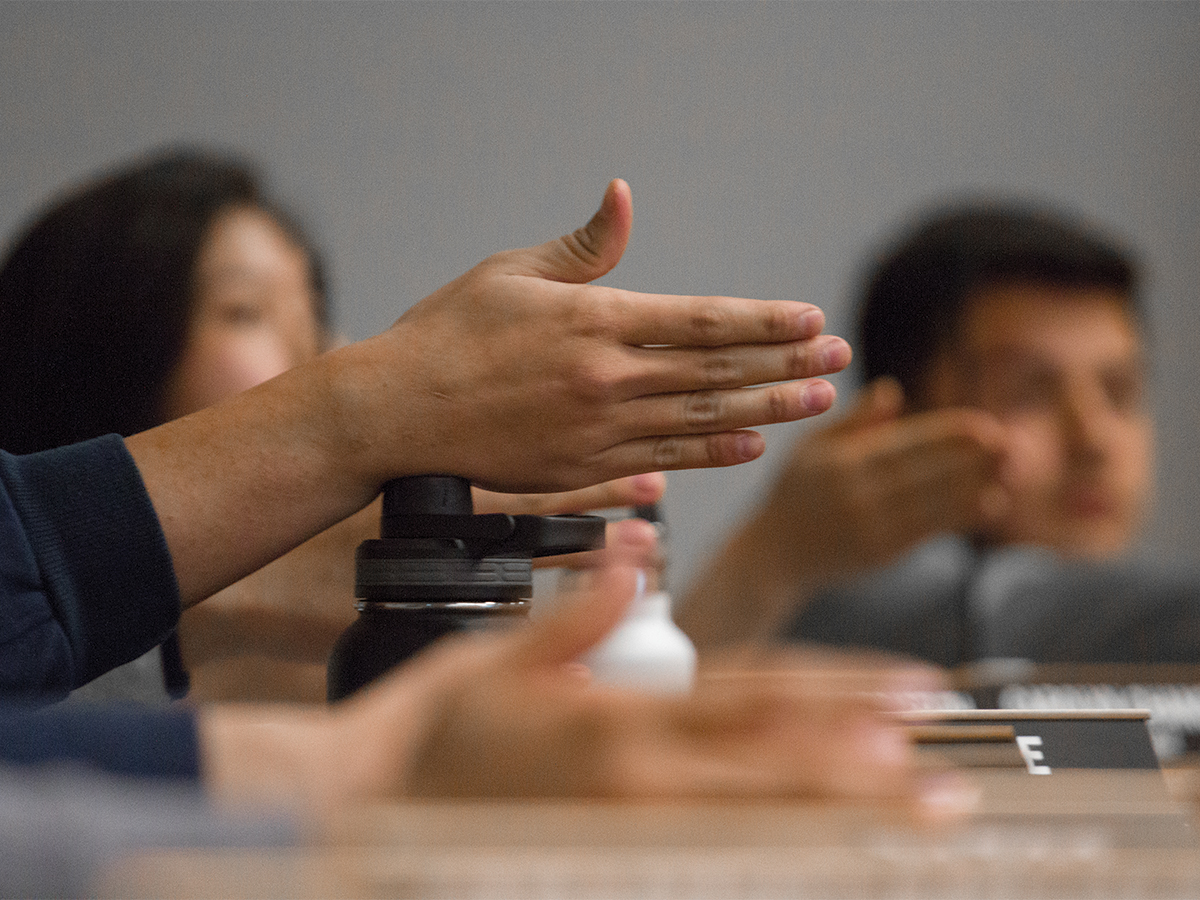 On Wednesday, Feb. 28, ASUCR senators voted to pass a $35,285.45 expenditure to fund R’Gear by a vote of 9-3-1. Started by 2014-15 ASUCR President Nafi Karim, the program is now considered a tradition at UCR which seeks to provide hoodie and crewneck sweatshirts at no up-front cost to students. Though open to all students, the initiative is primarily targeted toward freshmen in an effort to inspire school pride.

Discussion on the bill began when Senate President Pro Tempore Martin Cuenca moved to place the allocations discussion before Behind the Lens — Students Voicing Recovery, a research project about UCR students overcoming addiction. Vice President of Finance Jose Cortez-Hernandez, a third-year economics/administrative studies major, presented the allocations, asking the senate to approve the funds and providing a breakdown of the costs. $32,032.60 would go toward purchasing the sweatshirts including $2,032.85 in taxes and $450.00 in shipping. ASUCR plans to purchase 1,620 crewnecks and 2,420 hoodies at a price of $6.77 and $9 per unit, respectively, with the supplier being custom apparel manufacturer CBL. The money will be coming out of ASUCR’s contingency fund of $84,495 which is replenished every year.

Vice Chair of Personnel Andrea Cuevas, a third-year political science and education major, presented her plan for the R’Gear reveal slated for Thursday, April 12 at the SRC North Gym. In collaboration with Green Campus Action Plan, there will be a can drive to donate to the R’Pantry, Cuevas told the senate. Those who bring 10 or more items will be granted access to the “express” lanes and get their sweatshirts faster. Cuevas said, in a later interview, that they will have an exclusive reveal just for freshmen and, later, other classes of students are invited to come during designated time slots according to their last names.

Cuevas wrote in an email to The Highlander that she is excited for the event and wants “to utilize this event to create more student involment (sic) in campus activities by creating volunteer opportunities and showcasing some of UCR’s diverse organizations.”

Marketing and Promotions Director Connie Wi unveiled the design for the sweatshirts at the meeting. Wi said in a later interview that her team, when designing the sweatshirts, wanted to “be more trendy but still stay true to the aesthetic of not only our university but the city of Riverside.” During the meeting, Wi showed an image of the design consisting of the Box Springs Mountains and a large sun with “UC Riverside” written at the bottom. Due to additional edits to the design, Wi declined to provide a copy of the designs for publication.

Wi also expressed her support for R’Gear, stating, “I’m a huge fan of the tradition that R’Gear has created for the students of UCR. School spirit has always been a weakness of ours and it’s amazing to see that R’Gear can be something that unifies all of us.”

Executive Vice President Carisha Moore opened up the speaker’s list for questions, allotting three minutes per person. CHASS Senator Mariam Alkhalili was the first to speak on the allocations voicing her opposition, calling the initiative “irresponsible” and citing other, more important, needs of students. “There are a lot of people that want these sweaters, but they’re unaware that we’re spending $35,000, they’re unaware that these are not in fact free sweaters because they’re coming out of student fees,” Alkhalili said.

Alkhalili feels the UC already commercializes students’ education enough and instead suggested spending the money on lab coats for freshman and providing subsidized access codes. “If you posed options for the students, ‘would you like a lab coat or a sweater,’ I’m pretty sure people would rather save their money instead of wasting their money on a lab coat,” stated Alkhalili.

In an interview with The Highlander on Friday, March 2, Alkhalili said that she did not think R’Gear should exist in the first place, arguing that the project, “is supposed to help mimic UCLA with how everyone wears UCLA gear … I don’t think this is something we should be wasting our time and money on.” Alkhalili continued, “I think there are many unnecessary things students must pay for, namely to even attend the university, to get points in their classes … we should be working on lessening the cost of this for students instead of working on something as so irrelevant as school spirit.” She explained that with all of the more pressing problems on campus, school spirit should be the last thing student government should be worried about.

During the meeting, she also pointed out a discrepancy of $714.80 that she saw as unaccounted for in the total money allocated. Cortez-Hernandez explained that this was an error on the part of UCR’s procurement office in calculating the costs of extra-large and extra-extra large sweaters. Alkhalili moved to table the allocations for next week so that the discrepancy could be rectified but was voted down, 4-9-0.

CHASS Senator Roy Tongilava, a third-year public policy major, was also a vocal critic of the initiative. “Looking at the number, here we are spending over 40 percent of the contingency budget and only providing for 18 percent of the student body …. we really need to reevaluate the demand for this and then supply for that demand,” stated Tongilava, adding, “looking at the numbers, I’m going to have to disagree with this.”

Tongilava expressed his disdain with the project further in an interview. “There’s really no meaning to the project … it’s really a public incentive for certain candidates who are re-running in this upcoming election.” Tongilava cited the disbanded [YOUR]Side party who spearheaded the initiative to begin with, Karim being a member. “Their whole thing with R’Gear was using savings from the contingency budget to carry out the project and use it as a huge part of their platform for elections.”

Tongilava said that he believes that incumbents “bandwagon” on previously popular ideas. “I can bet that come this election every single person running will have R’Gear on their platform,” stated Tongilava. “This was carried on by previously known [YOUR]Side members, Vice President Cortez (-Hernandez), who was a [YOUR]Side senator, has decided once again that, even though for a reduced price, he’s still carrying on this project that was started, coincidentally, by his brothers in the KSig (Kappa Sigma) fraternity.”  Since the inception of [YOUR]Side in the 2015 campaign, the party has been closely associated with the fraternity Kappa Sigma. In the 2016-17 ASUCR administration, overwhelmingly dominated the senate and executive cabinet.

Through 2014 to 2017, two of the three ASUCR presidents were members of Kappa Sigma, with Nafi Karim also serving as president of the fraternity. 2015-16 ASUCR President Ashley Harano was dating a Kappa Sigma member during her term and drew controversy when she authored a resolution to call for the Interfraternal Council (IFC) to amend their constitution and recognize Kappa Sigma as part of UCR. It failed to pass with a vote of 0-7-6. The fraternity is currently still unrecognized by the IFC.

Tongilava went on to discount the widely held belief that these sweaters are free. “These sweaters are not free because students literally pay ASUCR fees, $12.50 a quarter, the whole year, that’s $37.50, that’s enough to buy a sweater themselves.” He does not feel that this will realistically strengthen school spirit and instead sees it as an issue that divides the campus. The senator expressed a desire to prevent, in his view, this type of wasteful spending, “but the senate disapproved of that.”

Nevertheless, the majority of senators approved of the initiative with several voicing their support.

CHASS Senator Reginald Wong said that R’Gear “puts ASUCR on the map” and stated that “R’Gear is really winning, especially with the election coming up this big with no parties and a record, correct me if I’m wrong, 78 candidates running, you can do a lot with R’Gear instead of just giving a sweater,” stated Wong (Editor’s note: According to the elections committee, 64 students are running so far, not 78). “This is something that students want … it’s pretty evident that they want this and are speaking their mind about this.”

Offering her perspective as a transfer student, Transfer and Non-Traditional Student Director Maria Chavez also expressed her support for the program. “Coming to this campus, you want to wear UCR gear … I’ve gone to other campuses, they rep their campus so hard and I wish UCR did that,” stated Chavez. She explained that when she transferred to UCR, she did not have a UCR sweater and, when she found out about the R’Gear program, she was excited to finally “rep” her school and did not mind student fees going toward it.

Some freshmen, BCOE Senator Patrick Le said, might feel ambivalent about UCR since it was most likely, such as in his case, a second-choice school for students applying to colleges. Le also expressed his disdain of seeing other students wear other universities’ sweaters, stating “Seeing every other universities’ sweaters on campus, it’s kind of like a joke and I’m getting sick of it.” Le also explained that he does not see where else they can spend $35,000 to “help the students,” since, in his view, what ASUCR can spend their money on is limited.

BCOE Senator Amanda Xaypraseuth explained that the project was needed to help increase ASUCR’s reputation. “This is one of the only tangible items the student body can see that ASUCR does,” stated Xaypraseuth. “ASUCR has a really bad reputation and to bring out R’Gear and say ‘ASUCR is doing this for you’ is a really good way to bring our reputation up.” She also explained the limited budget senators have to work with to make capital improvements for students, citing the difficulty in a project she worked on with Le to provide outdoor tables for BCOE students.

Cortez-Hernandez explained that he wanted to scale back the program and begin to focus more on first-years. In regards to questions on failing to obtain sponsorships like previously promised, Cortez-Hernandez said that he did contact Getaway Cafe but since these sweatshirts are targeted to those under the age of 21, and Getaway serves alcohol, he did not see it as appropriate. He also reassured the senate that there are no other major expenditures planned and, by the end of the school year, there will be around $29,000 remaining that will go into ASUCR’s reserves.

The senate’s vote on the R’Gear allocations carried out in the following order:

ASUCR will hold their next senate meeting this Wednesday, March 7 beginning at 6:30 p.m. inside the senate chambers (HUB 221).