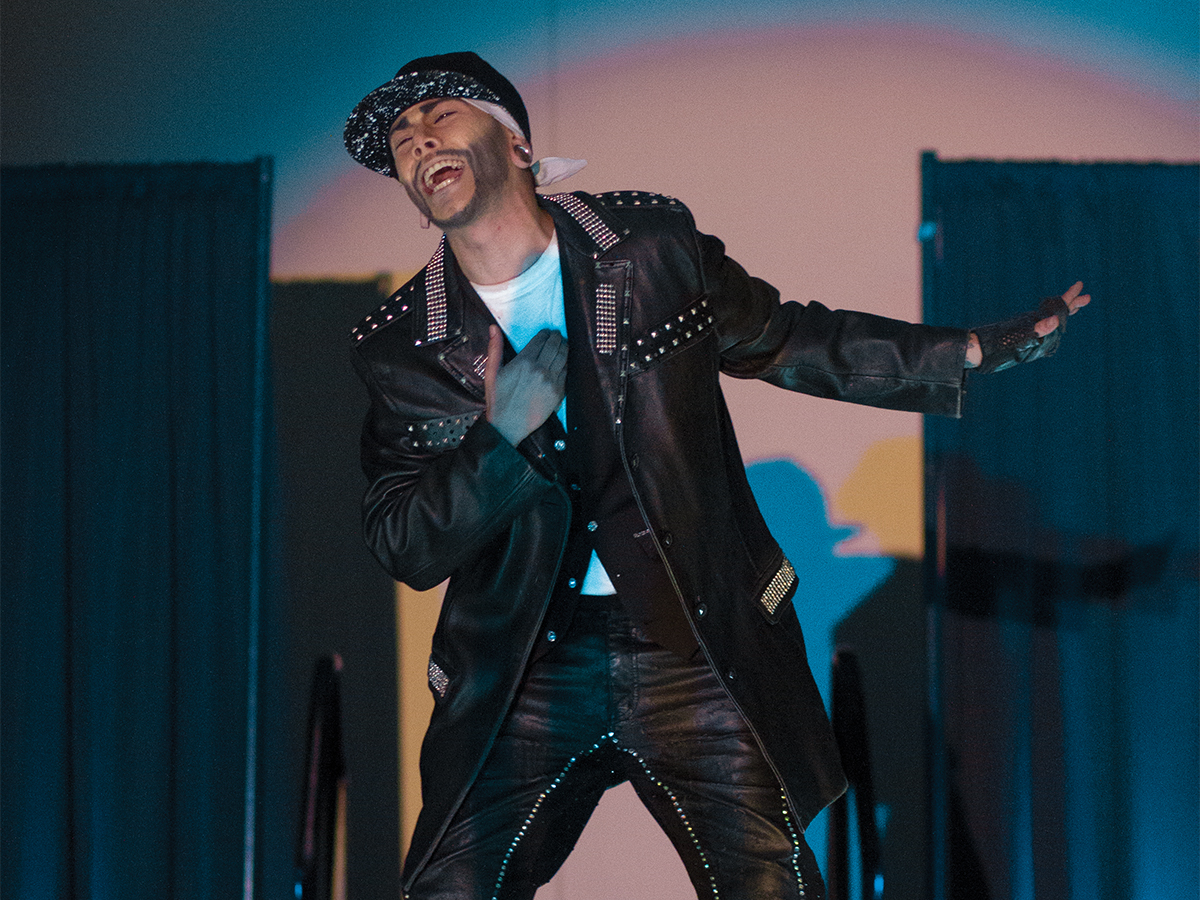 A group of drag queens practice their routines on the runway in their makeup and black high-heeled knee boots. They focus on the music as they intensively land cartwheels on stage. “They’re in drag mode,” Megan Rush, the program coordinator for the LGBT Resource Center, comments.

It is the night of Friday, April 6 and around 400 people are crowded outside the doors of HUB 302 waiting for the 15th Dragalicious Drag Ball. Once the doors open at 7:30, people fill up the seats while admiring the lights outlining the runway stage and the music provided by KUCR. A slideshow is set up against the wall at the back of the room that alternates between photos of the drag kings and queens, while also displaying various memes about tipping the drag performers. One specific meme reads, “Guac is extra/ Tip your queens.” “Drag is an expensive art form,” explains Toi Thibodeaux, the assistant director of the LGBT Resource Center. “You have to tip your kings and queens to support the art of drag in general.” Before the show and during intermission, Thibodeaux is out in the crowd with dollar bills asking attendees if they need change to tip.

The origins of the Dragalicious Drag Ball stem from a queer student retreat in January 2002, when a group of students decided to create an event focused on drag. With the support of Queer Alliance, Drag Ball grew to be an event that many students look forward to every year. The first Drag Ball was held at the Barn where it could only fit up to 70 people. Since then, Drag Ball has been held at HUB 302 where it can hold up to 400 people. Ticket sales and attendance for Drag Ball have increased every year, with this year reaching 200 tickets sold through pre-sales alone.

Drag Ball is also an opportunity for residents to become familiar with the resources provided by the LGBT Resource Center. “A lot of queer people at UCR don’t come to the LGBT Resource Center, so this is a nice event for everyone for be comfortable here,” states Andres Herrera, a third-year economics major who has been a volunteer at the Drag Ball for three years.

Attendees were encouraged to dress in drag for the event. “By celebrating drag culture, we invite students to think more about gender in general. To think about ways we perform gender everyday,” states Nancy Tubbs, the director of the LGBT Resource Center.

Drag Ball is not just an opportunity for students to explore and reflect on gender, but it is also a safe space for students to explore drag. “It’s very important for LGBT individuals to know that there is a safe space for them to be creative without having a target on their backs,” explains Iza DaJungle, one of the performing drag queens, as she prepares for the show. “(Drag Ball is) a place to cope, heal and, as a result, get to know each other. Drag gives a big middle finger to the gender binary.”

This is the fifth year that Mayhem Miller is hosting the Drag Ball. Miller is also a current contestant on season 10 of RuPaul’s Drag Race, for which she has been auditioning ever since the second season of the reality competition.

The show begins around 8 p.m. as the announcer exclaims, “Bow down for the queen of the party, Mayhem Miller.” Mayhem performs a rendition of Robin S’ “Show Me Love,” wearing a tight sequined ruby red dress. “Y’all got money! Y’all better stop it. Give me more!” Mayhem jokes after receiving many tips.

One of the early highlights of the night was Crescent Rose’s “Little Mermaid” medley. Rose came on stage with an Ariel costume, purple seashell bra, a skirt in the shape of a mermaid tail, and curled red hair. She lip-synced to “Part of Your World” while also acting out the scene from the movie in which Ariel’s voice is taken by the villain, Ursula. One person sitting behind me in the audience began quoting Ursula’s dialogue. After Rose’s performance, my friend whispered, “I got emotional.” Mayhem playfully commented, “It’s not a drag show until it gets gay,” referencing the use of a Disney song in the show.

Drag Kings, Phantom and Mr. E stood out for their energetic performances: Phantom’s “Willy Wonka” performance and Mr. E’s Bruno Mars medley had people dancing in their seats as they excitedly waved dollar bills ready to tip the kings.

Iza DaJungle (word play for “eyes of the jungle”) is a UCR alum who returned to perform at Drag Ball. DaJungle’s distinctive feature is her use of UV contact lenses. “As a boy, I’ve always been known for my green eyes,” she begins. “One thing that can help cover your identity is how you do your eyes. (When I perform with my natural eye color) I feel like the illusion is not complete because one of my most identifying features as a boy is still there with me.” For her performance of the song “She’s Like a Star” by Taio Cruz, DaJungle had pink contact lenses, a curly brown hair wig, gold hoop earrings and a glittery peach bodysuit.

After the show, Thibodeaux and Rush announced that the Drag Ball had raised over $1,700.  The proceeds will go toward funding the Kalyn Smith-Tranquil’son Memorial Fund, the UCR LGBTQIA Student Leadership Scholarships and the LGBT Resource Center Student Assistance Fund.

To close the show, Thibodeaux and Rush crowned Miller for her work as the crowd stood up and chanted, “Mayhem.” Miller finished by encouraging the audience, “Keep doing what you’re doing. Do what makes you happy. Keep working hard. You’re all beautiful. Don’t you let anyone tell you differently.”