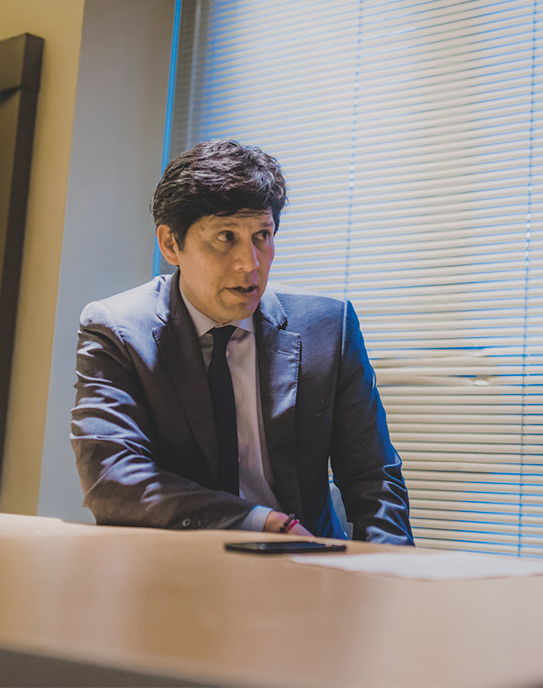 Before visiting UCR, de Leon visited his alma mater, Pitzer College in Claremont where he graduated with honors and a degree in political studies. He attended UC Santa Barbara, but left because “I didn’t do well” and, after several quarters on academic probation, attended Pitzer.

He is currently running to unseat Senator Dianne Feinstein (D-Calif.) for the U.S. Senate on Nov. 6, 2018.

Following Wednesday’s event, The Highlander sat down with de Leon to discuss the recent shooting death of Stephon Clark by Sacramento sheriff, sanctuary policy in California and funding the UC system.

The interview has been lightly edited for clarity.

Evan Ismail: My first question pertains to the killing of Stephon Clark in Sacramento last week by the Sheriff department. Is there still too much force being used and how would you suggest police handle these types of situations?

Kevin de Leon: I think it’s a tragedy, the situation in Sacramento. It’s happening much too often all over the state, all over the country. I know the mayor (of Sacramento) very well; he was my predecessor, Darrell Steinberg, and I have complete faith in him doing the right thing for his constituents, for the community that feels wronged and for the Sacramento police department. There needs to be a really serious objective independent examination of the training procedures because what we’ve noticed is that this is happening much too often and a lot of needless deaths are occurring all over the country and they are happening in communities of color, not exclusively, but primarily.

We have some very good police officers out there without a doubt but we have to really take an objective lense and look at what kind of training helped create these situations; could it have been handled much differently, could a young 22-year old father still be alive today if the objectives of the police investigated a man who was either committing robbery or breaking into cars? I don’t know the exact reason why the police were called to the situation, but there was a clear call for police response to tend to a certain situation.

So you have them doing their job and you have presumably this young man trying to open up the back door to his grandmother’s house, probably something he’s done normally many, many times and then you have this tragedy, you have to have this objective measurement and see what is going on because this is happening much too often.

EI: What is the senate doing to repair these types of divisions between police and civilians in communities of color?

KDL: There has to be some very serious criminal justice reforms that are taking place. We dealt with the issues of body cameras already. We’re dealing with issues of those officers who historically have a track record of abuse of citizens in California. We have much more work to do still but what is key is to have a sense of confidence in our local police officers, in our citizenry, and we have so much work to do.

EI: You touched on California sanctuary policies in the Q-and-A. What is your overall comment on Orange County joining the lawsuit against California and President Trump wanting to station troops on the border with Mexico?

KDL: What is happening is not a spontaneous, grassroots, organized effort — I should say organic effort — on behalf of the city council members and the mayors. This is an organized, coordinated political operation by the White House to engage like-minded politicians to rebel against the law of the State of California which is the California Values Act, Senate Bill 54. You can’t pick and choose which laws you want to follow and not follow, it doesn’t work that way, regardless of whether you like the political spectrum. Whether President Trump likes it or not, the law of the land is Senate Bill 54, the California Values Act. He’s going to attempt to sue us. I feel good about our odds in a court of law against him and the current Department of Justice.

“the State of California doesn’t have to contribute a single cent or lift a single finger … to help the Trump deportation machine detain innocent families, it’s that simple.”

EI: What will you continue to do for the undocumented immigrants living here?

KDL: I think there needs to be sensible, comprehensible immigration reform, something that’s fair and something that’s transparent and clear. What is happening all over the country is that you have different states reacting to the issue of immigration in very different ways whether it’s Arizona, Texas or Alabama. California has gone in a different direction because we value diversity as well as inclusivity. But many states are doing this because of the lack of leadership in Washington, because we don’t have a singular, coherent immigration plan that’s fair and is transparent across the board.

This is happening all over the country because of the lack of leadership, the lack of courage of Washington to do the right thing. Immigration policy is the exclusive jurisdiction of federal law and sometime folks conflate, mistakenly, or intentionally, that through Senate Bill 54, we are creating immigration law. We’re not prohibiting or stymieing federal immigration officers from doing their job. All we’re saying is that the State of California doesn’t have to contribute a single cent or lift a single finger … to help the Trump deportation machine detain innocent families, it’s that simple.

But also the provisions are very clear, they’re there, go read it. If you’re a serious, violent criminal felon there can be collaboration, cooperation with ICE agents. It’s clearly stated there. But clarity and facts are not part of this debate when it comes to this administration. This administration has attempted to color and conflate the issue of criminality and immigrants, statewide, like I said (in the Q-and-A), Jeff Sessions would be better served focusing on his own backyard because Alabama has a higher violent crime rate than does California.

EI: Governor Brown invested ambitiously in education in this recent budget, but the state has continued to divest in education. This comes as the UC has slipped in 80 subject rankings globally. Does this alarm you at all?

KDL: It is alarming and I think that we (elected officials) have to have an honest conversation. If in fact the UC system is the crown jewel of public universities globally, that it is the best public university system in the nation, outpacing both the University of Michigan as well as the University of Virginia; if our top three universities, obviously UCLA, Cal (UC Berkeley) and UC San Diego with Riverside and Irvine, are really making gargantuan leaps for younger colleges and universities in comparison to UCLA and Cal, we have to put our money where our mouth is because it is accurate that over the course of the past few decades, our commitment to our students has dropped exponentially.

If we are serious about providing quality education to our students in California then we have to pony up the money, it’s just that simple. We should have a really clear commitment to California’s college students and I think that it should be part of a real debate in the state capitol. If we’re serious about this, let’s do something about it because it’s very clear we have invested less money in the UC’s and we have invested more money in the prison system and it’s quite predictable what the outcomes will be. We have actually already stopped that trend, however, we’re not where we used to be in terms of funding for the UC system. We have much more to go to close that gap.

The report that came out, I didn’t read it completely and I don’t necessarily agree 100 percent. But if you say to me we’re starting to slip, then the answer’s yes and we have to stop that slipping, but the only way we can stop that slipping is we have to have servious corrective measures in making an investment and we have to be committed to California students. That commitment has to be manifested through real action which is a vote for more money for the UC.

EI: Is there a concerted effort by the senate to take some of the burden off of students?

EI: Do you think this type of education spending on the part of Governor Brown will last after he leaves office?

KDL: That’s a good question and it’s hard to tell whether a gubernatorial candidate’s commitment is to higher education. I think they all have a serious, strong commitment to higher education but that’s where the rubber hits the road and that’s where you cut the wheat from the chaff. You can say you have a stronger commitment to higher education, OK, that’s good, but you have got to make sure that’s reflected in your budget. Your budget statement is a reflection of your values so if you have a commitment to the students of California, regardless of their socioeconomic status, regardless of where they’re from, the Inland Empire, Southern California, Northern California, Central Coast, Central Valley, that strong commitment to them has to be manifested through the budget, and that is a reflection of values. That means more money.

This is a monetary issue. I think that the UC probably can be much more efficient in other ways for cost-savings but we want to keep this as strong as possible and we provide as much relief as possible. I’m on the record for opposing any tax hike on UC students, and that’s manifested obviously by raising tuition which is a tax hike on the backs of the students. I don’t think that the UC should be balanced on the backs of UC students, so therefore we need better efficiencies for the UC system and at the same time we need more of a stronger monetary commitment as well from the current and next governor.

EI: Senator, thank you very much for speaking with us.